Last week, some of the biggest players in the North American oil and gas markets gathered at the Four Seasons Hotel in Vancouver for the Canadian Oil and Gas Export Summit. While protesters outside the hotel yelled “No tankers, no pipelines, no tar sands,” industry insiders presented their visions for the future development of the Enbridge Northern Gateway Pipeline project, the Keystone XL pipeline, and Alberta tarsands oil.

This is the second of a special three-part series on the Summit. 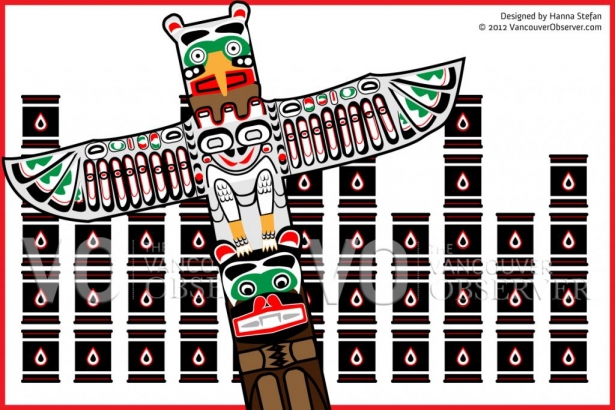 Can Enbridge push through the controversial Northern Gateway pipeline in the face of heavy First Nations opposition?

For many attending the Canadian Oil and Gas Export Summit in Vancouver last week at the Four Seasons Hotel, this was the foremost question in their minds.

Two different views emerged from the talks —one from Enbridge's public outreach firm, and the other from its management ranks.

Communica Public Affairs principal Douglas Ford, whose firm does public outreach on behalf of Enbridge, gave a riveting presentation about the history of oil on BC's coast and his company’s approach to addressing Aboriginal concerns regarding oil development projects.

“If you can't bring your A-game and A-team to negotiate with First Nations over a development project, don't bother,” he said. The small audience of around 15 people listened with rapt attention as the blond, ruddy-faced Ford stressed both the vital importance and daunting challenges of gaining First Nations support for the pipeline.

One particularly attentive listener was U.S.-based Energy Policy Research Foundation president Lucian Pugliaresi, who remarked after Ford’s presentation that the woes of American pipeline proponents paled in the face of struggles faced by companies dealing with First Nations in BC.

Rather than offering easy solutions on how to gain backing for development projects, Ford spoke of grueling challenges and need for empathy with First Nations' concerns. He addressed some of the major worries of pipeline proponents who had seen 100 per cent opposition at Smithers (Ford indicated that unanimous opposition was a “litmus test” as to whether a project could be approved in BC) and the recent large-scale “Freedom Train” protest in which First Nations from across Canada went to the Enbridge AGM to voice their opposition to the project.

Note to pipeline proponents: "It's not always about you"

Ford outlined Enbridge’s strategy of early engagement with First Nations and relationship building – and the importance of finding out what they want.

“Patience and empathy are important – it's not always about you,” he told the audience. “Ask what success looks like to the First Nations and find a way to mirror that.”

He noted that despite high profile protests in the news, First Nations were a diverse group and not all unanimously opposed to projects like the Northern Gateway.

“Don't let anyone ever tell you First Nations are opposed to everything — they’re not opposed to many different projects be it hydro or renewable power,” he said.

He advised industry proponents to avoid pitfalls in speaking with First Nations by ensuring that every meeting, email and conversation was properly documented.

Vancouver's Italian Day on the Drive