First Nations and supporters from across Canada are gearing up to bring their pipeline and tanker concerns to Enbridge’s annual shareholders meeting. 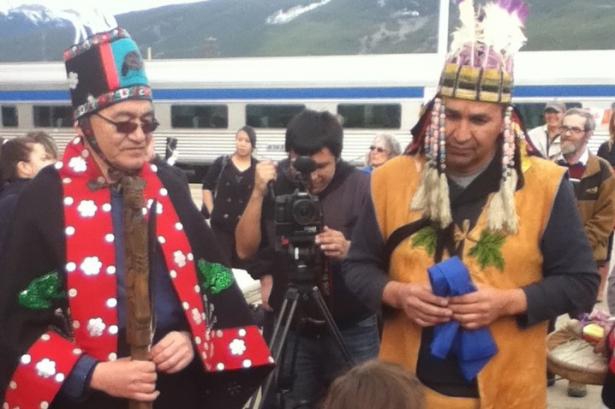 First Nations pipeline protesters aboard the cross-Canada “Freedom Train” have finally arrived at their destination in Toronto. Next stop: an in-your-face confrontation at Enbridge’s annual general meeting.

A rally and march planned for Wednesday will be the final leg of a 10-day journey arranged by the outspoken Yinka Dene Alliance, a group of BC First Nations united against the proposed Enbridge Northern Gateway pipeline and tanker route. The VIA Rail-operated train departed from Jasper, Alberta, stopping to greet supporters for events in Edmonton, Saskatoon and Winnipeg before reaching Ontario’s capital city.

One of the passengers, Hereditary Chief Tso Dih of BC’s Nak’azdli Band, said the Freedom Train campaign has been a very eye-opening experience not just meant to protect Aboriginal communities, but to protect all Canadians from environmental risk.

“We knew we had great support from everyday Canadians to protect the water that we all rely on—but we never dreamt we would see such a wide range of people coming out to support us, and signing on to our cause,” he said in a release.

“Enbridge’s pipelines and oil supertankers aren’t in Canada’s interest, and we’ll do Canadians a favour by putting a stop to them.”

Before Wednesday’s march to the Enbridge offices, participants and supporters in Toronto will be holding a concert Tuesday evening in support of the Freedom Train’s cause. Performers include Canadian musician Kinnie Starr, DJ Scratch Bastid and the Ottawa-based First Nations DJ crew A Tribe Called Red.

As the train pulled into Toronto on Tuesday, passengers were met by reporters—including a TV crew from the right-wing Sun News (home to Ethical Oil author and oil lobbyist Ezra Levant). On segment aired Tuesday, host David Menzies accused First Nations chiefs of using protests and “stunts” like the Freedom Train as a negotiating tactic to push for a more lucrative equity stake in the project.

“Clean water’s fine, but I think some of these cats want a Chris Craft yacht in that water, you know what I’m saying?”

But according to Aboriginal groups' past statements on the issues, Menzies' comments are widely off the mark.

Many of BC’s First Nations—who have signed declarations to ban the pipeline and tanker route through their territories—are adamant that their opposition has nothing to do with what Sun TV called “getting a piece of the action”.  Aboriginal communities along the pipeline route say no amount of money could compensate for bearing the risk such a project would pose to their land, culture and way of life.

Last fall, the Yinka Dene Alliance officially rejected Enbridge’s offer of a 10 per cent equity stake in the pipeline, calling it a "desperate and disrespectful attempt to buy our support".

The Alliance has been working for years to engage the federal government in a more inclusive decision-making process that brings their various concerns to the table. In February, the group also filed a complaint with the United Nations, alleging that the government’s intent to push the pipeline through violates First Nations’ constitutionally-protected rights.