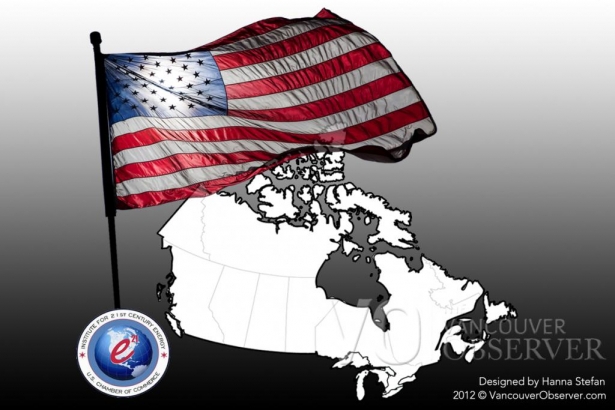 The U.S. Chamber of Commerce, a powerful Republican lobbying group, was in Vancouver last week for the Canadian Oil and Gas Export Summit.  The group's appearance comes amidst the Harper government's attacks on environmental charities in Canada, accusing them of being under the influence of foreign billionaire "radicals" from the US.

Christopher Guith, vice president of policy for the U.S. Chamber of Commerce's Institute for 21st Century Energy, addressed a small group of oil industry representatives at the oil and gas summit at the Four Seasons Hotel in downtown Vancouver.

Matt Koch, vice president for Oil Sands and Arctic Issues, was originally slated to speak at the event. Koch, who worked in the George W. Bush administration and at the American Petroleum Institute, had to cancel on short notice.

The U.S. Chamber of Commerce, described by The Economist as “the most muscular business lobby group in Washington”, is one of the largest Republican lobbying groups. Conservative commentator Glenn Beck recently held a telethon on its behalf, touting the Chamber as his ideological ally.

Through its state chapter, the U.S. Chamber of Commerce recently poured $4.7 million into Wisconsin to support Republican governor Scott Walker, who recently emerged victorious from his recall race.

Also present was EPRINC president Lucian Pugliaresi, a former energy lobbyist whose company, LPI Consulting, was registered as a foreign agent due to consulting work the firm has done for countries such as Saudi Arabia and Venezuela.

A "paradigm shift" for more oil supply, not less

Tall, blond and well-spoken, Guith told participants in the gleaming beige and gold conference room on the hotel's second floor that the world was going to need more oil in the future, not less.

“We're in the middle of an absolute paradigm shift. Conventional wisdom is on its head right now and very few people understand this, least of all in Washington, D.C.," Guith said, echoing the views of various Republican lobbying groups.

In Guith's view, a few points are critical for anyone in the oil and gas industry to understand in-depth: