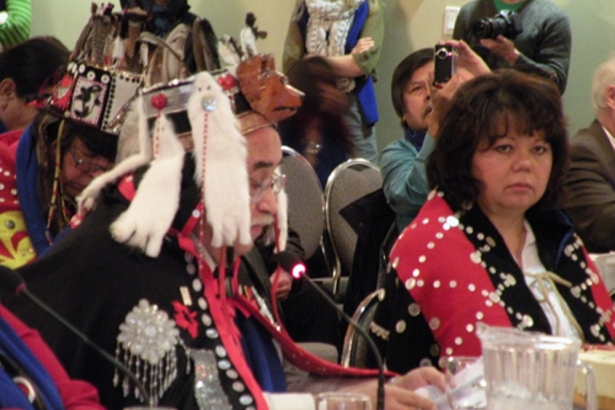 Wet'suwet'en Chief Darlene Glaim: "We have always held title to our land and have not negotiated it away.We come from a rich territory. Our lands keep us spiritually, physically and emotionally healthy."

It’s unanimous: all of the interveners who gave testimony to the Northern Gateway Joint Review Panel in Smithers oppose the Enbridge Northern Gateway pipeline. The Wet’suwet’en, BC Métis and Stikine MLA Doug Donaldson all asserted the Bulkley Valley is shared by different cultures which share a dependence on clean rivers for wild salmon.

Without salmon, none of the communities could thrive. The proposed pipeline puts the wild salmon and other wild food at risk.

The Wet’suwet’en have stood up for their heritage many times in the past.With the Gitxsan First Nation they blockaded logging in their traditional territory in the late 1980s, an action which culminated in the Delgamuukw decision of 1997. In that case, the Supreme Court of Canada held that aboriginal title is protected by the constitution and oral history can be presented as evidence of title.

Twenty two Wet’suwet’en spoke for about 15 minutes each. They identified themselves by chief status, house and clan, matrilineal lineage, patrilineal lineage, grandparents, mother, father, siblings, number of children and grandchildren. The testimonies described a system with no parallel in the law of private property. Each house or clan has rights to different parts of the territory. Hereditary chiefs allocate the resources within the house or clan. So family relationships, in the form of clan and house identity, define a person’s relationship to the land: where they hunt, fish, trap and with whom. Intervener after intervener in effect told the panel, “This land is my identity, my culture, my laws and my language. Without it, I lose who I am.”

Darlene Glaim, a hereditary chief, described the clan and feast system of governance. “Whenever we hold a feast, what happens at the feast becomes law,” she explained. “Without that, we wouldn’t survive Canadian governance.” Extra food is traded and reallocated at the feasts, and hereditary chief names are given. Family members are responsible for providing and sharing wild game, plant medicine, berries and fish. Elders train the youth to become chiefs because they will inherit chief identities as elders pass away. 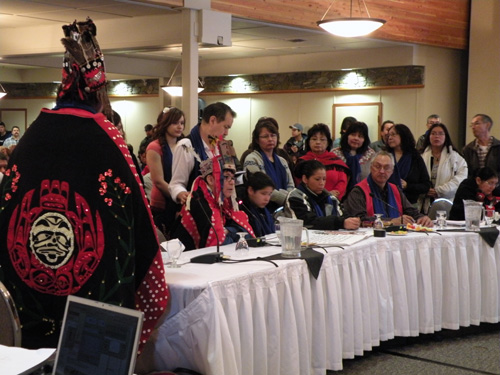 The interveners’ description of land rights sounded like story telling: memories of going to places where they possessed the right to hunt moose, run a trap line for rabbits, fish for salmon or harvest berries and medicinal plants, with the relatives who were responsible for teaching them about those rights, the skills they needed to get food, and the ways of showing respect.

For example, Chief Ron Mitchell testified that he was born into the House of Many Eyes, of the Small Frog Clan and had a Gitxsan father. Thirty people stood up while he spoke, indicating that he is a chief that speaks for them. He told the panel that of eleven siblings, nine are still alive. He was a translator for the Delgamuukw  decision and a writer for the Wet’suwet’en.

He spoke of his late father giving evidence in court. “The lawyers ask us over and over again about our family tree. I would like to know about their family tree. We know ours.” When he was a child and his family moved from camp to camp, they would leave a big fire burning to mark their camp as a place that needed to rest so the wildlife could return. He described the land area his people are caretakers of and how his brothers and cousins bring him wild game.  He talked about his uncles and fathers teasing each other about who got more beaver. As a kid, he packed out the moose, beaver, elk and bear that his family hunted. This work made him fast enough to come in 4th out of 300 in a regional cross country race.

Chief Mitchell told a few more stories and ended with how important it was to him that his grandchildren be able to stop anywhere in the territory to get a drink of water and to know where the berry patches are and to eat the food from the territories. “The answer to the topic in question today is a resounding “no” in the name of the House of Many Eyes, the Beaver and Fireweed clans and in the name of my grandchild,” he concluded.

The testimony and stories ran from 9 until 5, with presentations averaging 15 minutes. Every single person told stories of getting food from the wildlife of the land and how this defines their culture. And every single person gave Enbridge a distinct “no.” Many people testified in Wet’suwet’en and had their testimony translated.

Lorena Morris set up a display table with canned huckleberries, oolichan grease, soap berries, devils club tonic and sockeye salmon. She said people were buried where they died in the territory, and the whole area is a graveyard. 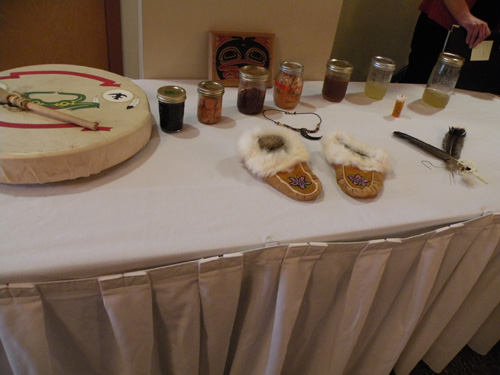 Lucy Gagnon said she couldn’t fathom a world without salmon. Samantha Vincent said she shot her first moose at 16 and shot her last one a month ago. Richard Sam said that the river is life blood to his people and every established and ephemeral stream the pipeline passes runs into the river that his people depend on for their existence.