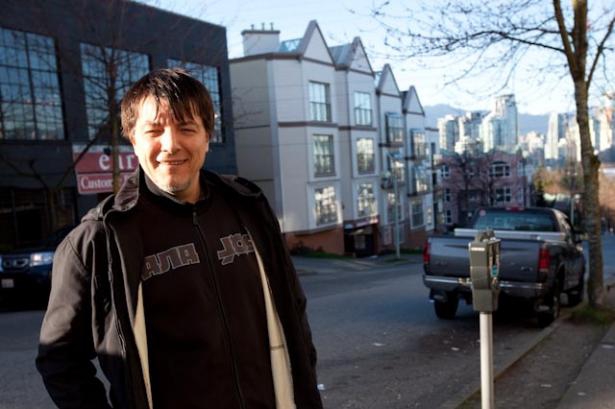 Kent Lins, two days after being arrested as he attempted to document chlorine shipments at night on the rails of Greater Vancouver during the 2010 Olympic Games

Kent Lins took his camera and got into into his car.

Lins's goal was to find out if Canexus Chemical Plant had halted the transport of chlorine, a deadly chemical, during the Vancouver Olympic Games, or if the company was  continuing to ship chlorine cargo through the city's tunnels, along its rails and beside its streets during that time and beyond it.

A friend had sent Lins a link to an article in the Vancouver Observer by Megan Stewart that tracked chlorine accidents over the last ten years.  The article had upset him.  It listed the following chlorine disasters:

1. On September 16, 2009, a truck carrying chlorine collided with a cargo truck in Clarines, Venezuela, causing the death of eight and creating respiratory illness for 326 others. The entire population was evacuated.

2. On January 6, 2005, in Graniteville, South Carolina, a railcar carrying chlorine gas slammed into a parked train on a side track.Fourteen cars and a moving train derailed, including three chlorine tank cars, one of which leaked a cloud of deadly green gas. Eight died at the scene, at least 525 were treated in emergency rooms and 71 were hospitalized for severe chlorine poisoning. Nearly 5,400 people living within a mile of the crash were evacuated for over a week.

3. On March 29, 2005, a truck carrying 35 tons of chlorine collided with another truck on the Beijing-Shanghai Expressway near Huai'an China, killing 28 and forcing the evacuation of 15,000.

4. On June 28, 2004, another railcar disaster occurred involving chlorine. Fourteen miles from San Antonio, Texas, 23 railcars jumped the tracks, chlorine leached out, killing three people, including the conductor, leaving 50 in the hospital. In San Antonio, the noxious cloud reached the zoo, "felling" eight people." 5,400 were evacuated from the area.

5. When a Canadian Pacific freight train derailed in suburban Toronto 30 years ago, 11 propane tanks rumbled off the tracks followed by 13 other cars carrying a combustible and toxic load that erupted and sent flames and gas flaring more than 1,000 meters into the air. The accident forced 218,000 residents from their homes for five days and a newspaper declared the catastrophe the "Mississauga Miracle" because there were no immediate deaths.

The derailment sparked amendments to the Transportation of Dangerous Goods Act. Added in 1992, Part Seven of the act requires all shippers to prepare and submit an Emergency Response Assistance Plan to Transport Canada, giving first responders and authorities the information they need to mitigate destruction and death.

The problem, Lins thought, was  not Canexus, which has a clean record for safety. The problem was chlorine, which can be lethal.

Fred Millar is a consultant on Hazardous Materials Transportation and Homeland Security based in Washington, D.C. He suggests that Canexus produces chlorine primarily for shipment to facilities in Texas and is critical of transporting the chemical through highly concentrated urban areas. "This puts millions of people at risk," he said. "If there's a better candidate for closing a chemical facility in Canada, I don't know what it is. I don't know of one more dangerous."