Beijing's last bout with pollution took a significant economic toll -- and the implications for Ottawa are grim. 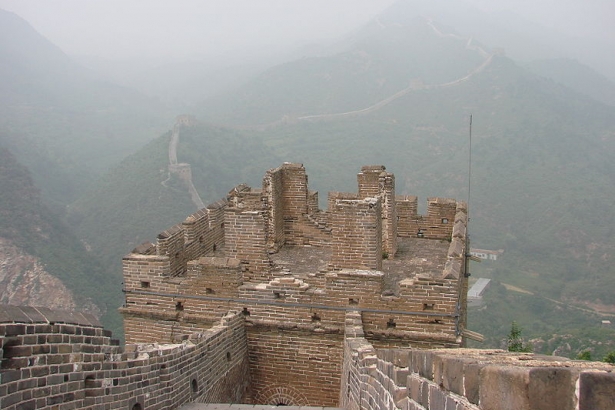 Pollution covering The Great Wall at Beijing's Simatai (F3rn4nd0).
The unusually thick veil of smog that blanketed Beijing earlier this month is taking its toll on not only Chinese lungs but the economy, reports say, in what may be a lesson to proponents of ramped up Canadian natural resource extraction: environmental protectionism isn't always at odds with gross domestic product.
Several factors contribute to Beijing's pollution, which reached hazardous highs only a week ago. The smog comes from factories in the city's suburbs, designed to create jobs for an ever-booming migrant labor population that is looking to send money back to areas of the country that have benefited less from the last decade of economic expansion.
There are even more factories in Hebei, the industrial province surrounding the capital. And Beijing is surrounded by mountains, in what creates a natural cauldron for what Chinese infamously refer to as Beijing's "dry, dirty air."
Beijing's environmental crisis also comes from its primarily low-grade coal reserves -- the largest in the world, burned to generate some 80 percent of the 1.3 billion-person nation's electricity.
This latest bout with pollution took a significant economic toll, analysts say.
Flights were canceled across China's North, health officials were forced to shut down some of the city's surrounding factories and hospitals were inundated with patients complaining of respiratory diseases, according to an LA Times article today, published with photographs of the old imperial palace, barely visible through the pollution.

Chinese citizens getting sick costs the Chinese economy both in labor supply and in health care costs. A loss of able-bodied workers and medical care is estimated to have cost Beijing US $112 billion in 2005, up $90 billion in just three decades, according to calculations by the Massachusetts Institute of Technology (MIT) published last year.

China is a step ahead of Canada's own health care privatization movement, so the burden of medical bills related to pollution is already having crushing effects on everyday citizens there.

But Canada's situation is comparable to that of China in more ways than health care. China is driven by an economic imperative exploit more and more of its coal deposits. Providing for its large population demands that it extract and import evermore fuels, but it is now clear the environmental implications of that fuel consumption have economic implications too.

Canada's domestic and overseas oil interests often observe that Alberta tar sands crude represents a major economic boon to the country, but analysts and environmentalists say its production, transmission and use would serve to drastically alter the state of Canada's environmental integrity.

The ongoing discourse for more extraction of tar sands oil often pits the economists against the environmentalists.

Kinder Morgan Canada's Ian Anderson has said some 60 percent of the $4.1 billion it would cost to realize a prospective project to double its pipeline through British Columbia would be spent in the province. The total economic impact of the pipleline expansion would be $6.6 billion, and it would create an additional 65 permanent full-time jobs, 35 of which will be in British Columbia, according to the Texas-headquartered company's estimates.

It is impossible to calculate, at this point in the Canadian environmentalist's battle with the nation's oil industry and its proponents, just how much environmental impact will cost Canada in real capital. As China's economy continues to falter, it's a calculation legislators for and against heightened extraction need to make.
For now, the cost of environmental degradation exists as mental math, and money is ostensibly pitted against public safety.
Read More:
Share on Facebook Share on Twitter