Why would Beijing hold onto a policy that the nation's leading academics say may cripple China socially and economically? 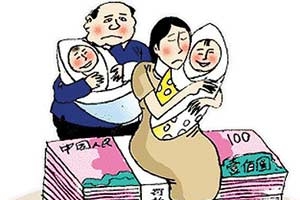 Under the One Child Policy, rich Chinese families can often pay a fine to have a second child (Sina Weibo).

China's controversial One Child Policy is once again taking center stage in the nation's ongoing discourse on reform, but authorities aren't budging on family planning programs -- at least for now.

"The policy should be a long-term one and its primary goal is to keep a low birthrate," Beijing's minister of National Population and Family Planning Commission, Wang Xia, said according to a Commission release Wednesday.
Conclusive as Wang's declaration sounds, China's Twitter-like social media site Sina Weibo has not blocked -- as with the recent discourse on press freedoms and independent national newspaper Southern Weekend -- but rather encouraged Chinese netizens to debate the merits of the policy, inaugurated in 1976 under the leadership of Deng Xiaoping, the man behind China's economic success story.
With some 8.6 million users commenting on the issue, it's become a Weibo Hot Topic in little over two days, with people fervently arguing for all sides. There is a even a spread on Weibo highlighting the pro's and con's of the policy with quaint, little comics.
The Family Planning Commission's latest pronouncement comes in response to months of debate on the policy, which engulfed the Chinese Internet largely after graphics photos of the victim in a forced abortion lying next to her aborted fetus went viral. The mother, Feng Jianmei, was unable to pay local family planning officials the fine necessary to have a second child, and was forced to abort -- in a bitter reminder to Chinese netizens of growing economic disparities in the People's Republic, where richer parents can afford to procreate more.
Opponents of the policy often cite gender imbalances and a population demographic increasingly skewed toward the aged as reasons to revisit family planning legislation. The economic and social impact of these challenges were chief among the concerns addressed in an open letter from high profile economists and academics to officials in November, calling for authorities to review the policy. If there are no young workers and not enough women for each man to give birth to a worker, many of the opponents ask, what will happen to the Chinese economy?
Of course, there are countless retorts to this argument. Not every Chinese man needs to enter into a monogamous relationship with a woman. Alfred Kinsey famously observed that one tenth of humanity is gay -- a gender imbalance argument in China almost inevitably assumes all men -- gay or straight -- need a woman, only one and only Chinese. People emigrate and intermarry.
And China's economic leadership perennially promises that China is no longer going to be the world's factory -- that the economy is rebalancing away from a production-skewed model to a more consumption-intensive model.
Proponents of the One Child Policy have also noted that China's overpopulation is overwhelming, with Beijing city limits perennially reaching out toward the countryside to cope with influxes of rural migrants looking to send money home to their families. Also, China's overpopulation, as I noted in this article, is a key contributing factor to the low standard of living faced by many Chinese labourers. With a huge population, Chinese workers who won't put up with terrible wages and working conditions are easily replaced. A huge labour supply leaves the Chinese worker with few options in life, as we've seen in the Foxconn suicides.