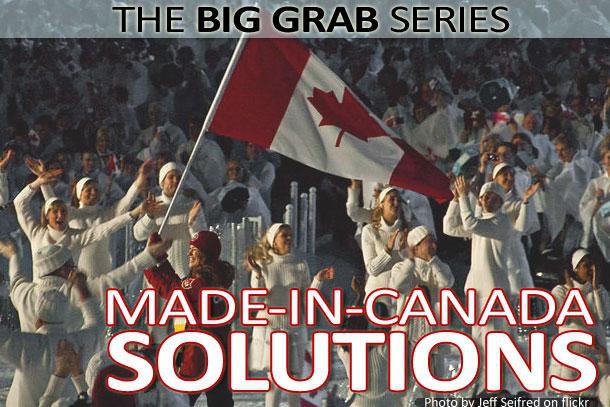 Canadians want action on climate pollution, and most are already doing their part. But Canadians are facing the oncoming low-carbon future without a comprehensive national plan for how we will fairly divide our economy’s limited CO2 pie. The result, predictably, has been failure. The efforts of most Canadians to cut climate pollution are being wiped out by the rapidly increasing climate pollution of a small minority.

In the absence of rules, Alberta’s oil sands in particular are elbowing aside other Canadians to grab hundreds of millions of tonnes of CO2 away from them. The fact that the oil sands corporations are so far refusing to pay the costs of their Big Grab means that the jobs and incomes of Canadians outside the Alberta oil sands bubble are threatened.

That threat is amplified because the oil sands produce six times fewer jobs and three times less GDP per appropriated tonne of CO2 (tCO2) than the broader Canadian economy does. To make matters even worse, the oil sands have been getting dirtier in recent years.

Instead of ensuring lower-carbon prosperity by maximizing our wealth and jobs per shrinking tCO2, this national carbon- transfer scheme threatens to build our economic future on a crumbling foundation of anaemic productivity-per-tCO2.

The oil sands' unrestricted grabbing of other Canadians’ fair share is pitting one group of Canadians against another, one industry against the others, one province against the rest of Canada.

We are becoming two Canadas: a broad, forward-leaning Canada with a shoe size of 16 tCO2 that is acting to cut climate pollution – and a small, dirty economy Canada with dirty, 68-tonne boots that is stomping out all the progress of the other.

All Canadians need to do their fair share. And all Canadians deserve a decent shot at thriving in the emerging lower-carbon economy. Neither of these things will happen until our government provides a comprehensive national roadmap to low-carbon prosperity for all Canadians.

So we end our “Big Grab” series here, with a look at several existing made-in-Canada strategies that our nation can expand on to come together in a long overdue push to build a prosperous future for all.

Choosing different CO2 targets and rules for each economic sector is the approach taken by the Harper government so far.

A small group of politicians in Stephen Harper's government pick winners and losers in a top-down, command-and-control approach to deciding how they think the economy can best meet our climate pollution targets. The idea is that each sector of the economy will eventually be assigned a different set of targets and a different set of rules to play by.

This strategy seems an odd choice for a conservative, free market economist like Harper. Even so, while it might not be the most economically efficient or the fairest, if made comprehensive quickly enough, it could meet Canada’s climate pollution targets.

So far, however, it is under-developed, unfair and failing.

Despite being in power for all of the five years covered by our national CO2 pledge, the Harper government has picked just a few sectors and assigned to them only 13 per cent of the needed national cuts. 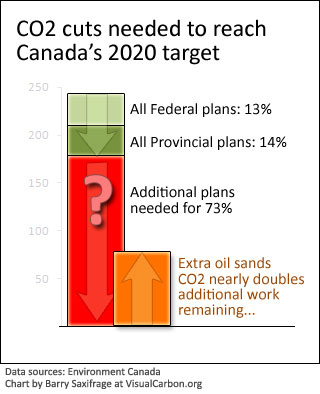 To be successful, this strategy will need to be quickly and dramatically expanded.

So far, three-quarters of the needed CO2 cuts have not been assigned to any sector. With only nine years left to meet the target, delay is rapidly increasing costs and risks.

STEP 2: Expand to all sectors

To be fair to all Canadians, the Harper government must require that all sectors of the economy do their share. So far, the government has assigned meaningful targets and rules to just a few sectors. They have put the burden on just a few subsets of our economy.

And so far,  the Harper government has also refused to set limits or rules for the one sector with the most rapidly growing climate pollution – Alberta’s oil sands. If they continue to give the oil sands sector a free pass to increase CO2 pollution without having to pay for it, then they will have to pick other Canadians to make the extra cuts and pay for them instead.

The Harper government says it will pick other sectors later and give them targets and rules. But they have yet to tell the people who will have to cut just who they are or what will be expected of them.