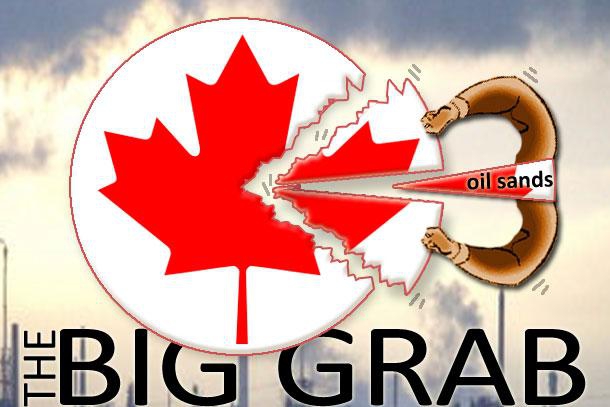 The Alberta oil sands are grabbing huge chunks of Canada's limited CO2 allotment away from other businesses and families, forcing these Canadians to make much bigger and more costly cuts in the next few years. Not only are oil sands corporations forcing other Canadians to cut far more than they would otherwise need to, but they are refusing to pay the extra costs -- and are sticking the rest of us with the bill.

Neither the federal government nor the Alberta government has done anything to protect the other 99 per cent of Canadians from the oil sands industry grabbing more than its fair share. This lack of rules is pitting one group of Canadians against another. The rest of us outside the oil sands bubble are losing. And it is about to get much worse.

Fortunately we have a several existing made-in-Canada solutions that we could choose, as a nation, to build on and re-unite Canada in the critical race for low-carbon prosperity.

The Big Grab, a series of nine Vancouver Observer articles, delves deep into government and industry data to illuminate the details:

Ready or not, the low-carbon reality is at Canada’s doorstep. Our prime minister has committed Canada to a 17 per cent CO2 cut over the next nine years. Most Canadians are on board and already acting to cut climate pollution.

But big CO2 increases by Alberta and the oil sands have wiped out their efforts and left our nation falling farther behind the U.S., the European Union, the Organization for Economic Co-operation and Development and many other nations. Economists are clear that  Canada's delay in acting is raising our costs and increasing our risks.

This article will lay out the facts about why Canadians need to pick up the pace -- or risk seeing our prosperity slip away as carbon cuts kick in. (more...)

Part 2: ELBOWS OUT, HOGGING THE PIE

In any lower-carbon economy, increasing CO2 in one sector must be balanced by squeezing extra CO2 from others.

In the absence of rules to ensure all Canadians are treated fairly, Canada finds itself with just one industry that is still rapidly increasing CO2 pollution: Alberta’s oil sands.

To put that into perspective, this is more than all the CO2 emitted by all Canadian homes, commercial and institutional buildings.

While the oil sands are planning on taking all that CO2 from others, they have shown no plans to pay for it. This article will delve into the data to show just how big a grab this really is, and what it means for Canadians who will have to pick up the tab. (more...)

Grabbing fair share away from others -- without paying the costs that imposes -- would mean plenty of economic trouble for everyone else. But the oil sands also have an Achilles heel that threatens to multiply the harm they are imposing on other Canadians. The oil sands generate six times fewer jobs and three times less GDP per tonne of CO2 (tCO2) than the rest of our Canadian economy.

Maximizing prosperity in a restricted carbon future requires maximizing jobs and GDP per tCO2. But the oil sands Big Grab does the opposite. They are busy transferring ever larger shares of our economy’s shrinking CO2 allotment to one of our least productive per tCO2 industries.