Oil sands boosters say the industry is getting cleaner. But the data says it's not: CO2 is rising per barrel and overall, the future looks even worse. 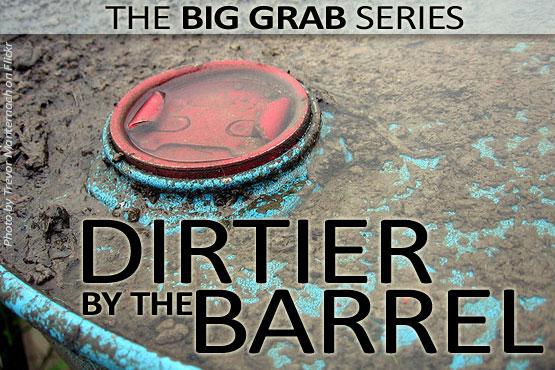 When it comes to climate pollution, a common message from oil sands boosters is how much "cleaner" the industry is getting. Data from the last five years, however, shows CO2 rising both per barrel and overall.

By “cleaner,” the oil sands corporations have never meant they are actually producing less climate-destabilizing pollution. Quite the opposite. Their CO2 pollution has been increasing relentlessly and they have never shown any plan that would reduce their current 44 million tonnes of CO2. Instead, their plans call for dramatic increases for years and years to come. 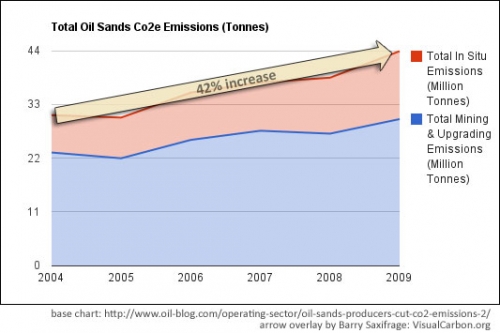 Estimates by the industry itself, by the Canadian government, by the Pembina Institute and by the National Round Table on the Environment and the Economy all show similar or greater growth rates continuing at least through 2020.

What the oil sands industry means by getting “cleaner” is that they are reducing the CO2-intensity per barrel. For example the Canadian Association of Petroleum Producers (CAPP) booklet "The Facts on Oil Sands" says “Since 1990, GHG emissions associated with every barrel of oil sands crude produced have been reduced by 39 per cent.”

Barrels getting cleaner will help some even if they expand production, right? Maybe. If it were true. But the industry's own numbers seem to say it isn't anymore.

What the industry doesn’t brag about is that their reductions in CO2 intensity-per-barrel slowed and then stopped early in the last decade. Since then? According to the same CanOils industry report, "per barrel emissions remain higher than five years ago." Their own chart shows CO2 emissions per barrel, for both integrated and in situ, have risen around 20 per cent in the last five years. 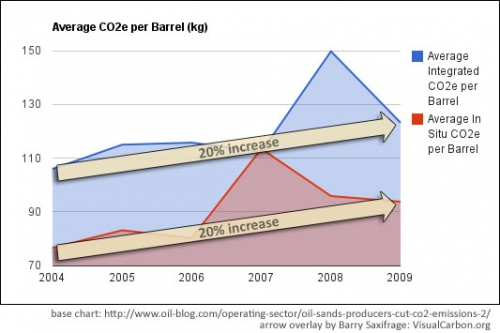 What about in the future? Most of the remaining oil sand deposits are so deep they need to be extracted via “in situ” methods. Pembina reports that in situ extraction will become the dominant method around 2017 and that “data comparing in situ and mining emissions consistently comes to the same conclusion — in situ oil sands production creates higher greenhouse gas emissions.”

Perhaps Canadians will see that it's in their best interest to put the oil sands under the exact same declining CO2 cap as rest of the economy: 17 per below 2005  levels by 2020. Then, if the oil sands want to expand, they can do so by finding ways to actually get cleaner, just like the rest of us need to. The incentives would then be in the right place. Best of all, the oil sands corporations wouldn’t be squeezing out other Canadian businesses and families or subverting national policy. They would be paying their own way.

An industry that is creating fewer jobs and less wealth per tonne of CO2 (tCO2) is now getting dirtier per barrel and expects to grab huge amounts of CO2 from the rest of our economy. This industry also has so far refused to pay what it costs to clean up these extra tCO2 elsewhere. And there is no plan in place to show which Canadians will have to cut more to make up the difference, or what this will cost them.

Is this how Canadians want to proceed into the low-carbon future? With under-performing industries racing to grab as much of everyone else’s CO2 allotment as they can with no attention to paying for the damage to the rest of Canadians’ prosperity? Or will we expect all Canadians to do their part, and our government to provide a plan that looks out for all Canadians’ jobs and pay checks?

Fortunately,  there are several existing made-in-Canada solutions that could be expanded to eliminate this economic threat and national division. Unfortunately, our federal government has refused to act on any of them so far.

Until a comprehensive national climate pollution plan is in place, Alberta and its oil sands need to pull in their elbows and stop grabbing other Canadians’ fair share. They need to start paying their own way and stop dragging the rest of us Canadians into an economic tar pit.

“Little Fish. Big Pond”, sorts through data from government, industry and other sources to try to place the size of the oil sands industry in the context of our greater Canadian economy. Just how big are the oil sands?