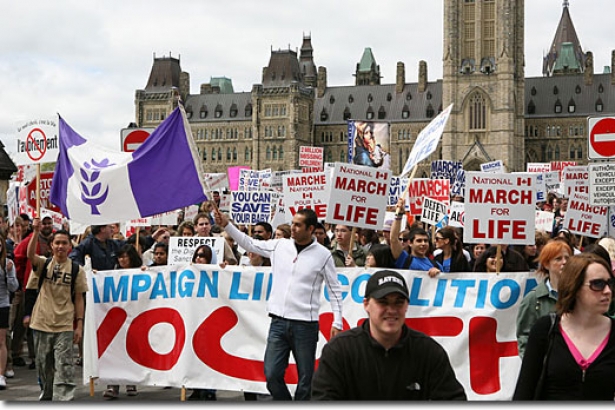 Last May in Ottawa, 20 Conservative MPs participated in the March for Life, an annual anti-abortion protest that mirrors its namesake in Washington, D.C.  The march commemorates a 1973 U.S.Supreme Court ruling that abortion is a private decision and not a crime.

One of Canada’s most active pro-life groups, the Campaign for Life Coalition (CLC), organized the Ottawa march, mobilizing thousands of protesters  to raise awareness on what they believe to be the moral problem and dangers of abortion.

Conservative MP for Kitchener Centre Stephen Woodworth spoke to the crowd, stating his belief that the current Canadian “definition of human being is dishonest and wrong” and that “human rights are an inherent and inalienable gift” which Parliament cannot rescind with Section 223 of the Criminal Code.

The Campaign for Life Coalition has members in cities across Canada and a lobbying office in Ottawa where, its website says, the organization works “at all levels of government to secure full legal protection for all human beings; from the time of conception to natural death.”

CLC's belief system is that human life starts at conception, and like Woodworth, the organizations' members believe that Section 223 is “on par with North Korea” for "disallowing “protection for children up until the little toe comes out of the birth canal.”

The Canadian abortion debate, seemingly laid to rest in the eighties, has seen a new resurgence,  in part because of U.S. funding on this side of the border.

Research on tax filings and joint ventures of charitable organizations show support for Canada’s pro-life movement from Catholic groups in the United States, as well as increasing support for the cause among MPs aligned with religious organizations.

Last September, Woodworth tabled Motion 312 to determine the definitive point when a human being is a human being: at conception, after birth, or somewhere in between.

He argued that he wanted to finally address a study proposed to the legislature by Justice Bertha Wilson in 1988.

“Motion 312 actually embodied the specific suggestion that Justice Bertha Wilson made at the time when she was writing the [R v. Morgentaler] decision and throwing out Canada’s last abortion law. She actually suggested that Parliament needs to have a look at which point we should be protecting the interest of children before birth.," Woodworth told the Vancouver Observer.

But Woodworth's motion was met with general dismay in the House of Commons and was defeated by 203 to 91 votes. Prime Minster Stephen Harper had distanced himself from the discussion back in April and petitioned his party to squash the Motion once September came.

Yet despite the Prime Minister’s call, 87 Conservative MPs voted in favor of Motion 312. These MPs make up 53 per cent of total Conservatives.

On the same day of the Motion 312 vote, Langley’s Conservative MP Mark Warawa filed Motion 408, which calls for the House of Commons to collectively condemn sex-selective abortions.

Referring to Warawa’s Motion, Mr. Woodworth said, “[I]t’s going to be interesting to see whether or not there are those whose preoccupation with abortion is so single-minded that they are willing to accept discrimination against females through gender selection [sic] pregnancy termination.”

Woodworth says  that the House of Commons needs to update its views in the face of “advances in medical science and modern understanding.” He explains that Canadian law must  reflect the reality that a 400-year old definition of the human being cannot avoid democratic review and stay “frozen in time.”

Nickel and dime average people
In order to raise the funds for CLC’s political activism, the CLC turns to small donors. The march, according to CLC president, Jim Hughes, costs around $100,000 each year.

Mary Ellen Douglas, CLC Ontario president, told the Vancouver Observer that donations come from over 100,000 families the CLC is in regular touch with, and from “nickel-and-dime” average people.

She said that the bulk of activism money is raised by the CLC itself and that they do not overly rely on larger organizations like the Canadian Conference of Catholic Bishops, Canada’s national assembly of the highly-ranked clergymen and one of the distinguished sponsors of the March for Life.