Members of Parliament will debate Conservative MP Stephen Woodworth's Motion 312 on Friday, a private member's bill which calls for a special committee review of the Criminal Code of Canada's definition of a child, which is defined as a human being once it's born. A vote is set for September 26. 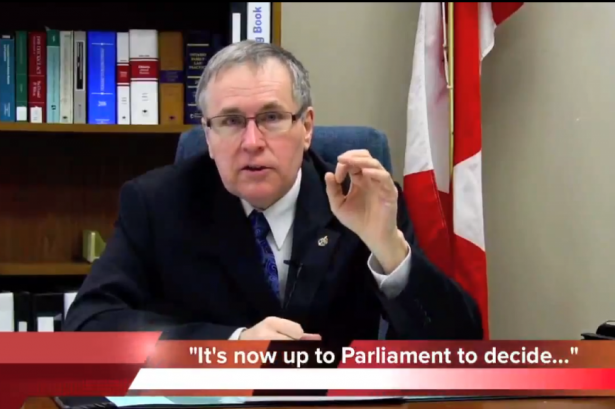 Conservative MP Stephen Woodworth explains the reason for Motion 312 in a video. (Screenshot)

Conservative MP Stephen Woodworth, whose private members bill Motion 312 went through a second debate today and is scheduled for a vote on September 26, said that he would stand firm by his beliefs to his "dying breath."

"I have said more than once that to my dying breath that I will stand up for the notion of universal human rights, laws, respecting the inherent dignity and worth of every human being," Woodworth told The Vancouver Observer in a telephone interview.

He said he takes issue with the fact that the law currently defines a child as having more rights than a fetus.

Motion 312 proposes a special committee to review the declaration in Subsection 223(1) of the Criminal Code of Canada which states:

(1) A child becomes a human being within the meaning of this Act when it has completely proceeded, in a living state, from the body of its mother, whether or not

The motion created a flurry of debate and controversy when Woodworth first introduced it in April.

But Woodworth said that Motion 312 is not about re-opening the abortion debate in Canada.

"You have to be very clear about the fact that Motion 312 is not proposing that the government have any control over anything or anyone," he said. He insisted that the purpose of the bill is to further "universal human rights".

However, Joyce Arthur of the Abortion Rights Coalition of Canada did not agree with Woodworth's take on the Motion, calling it a "smokescreen" which on paper seems a neutral investigation into recommendations to Parliament, but is actually the first step in an attempt to reestablish personhood for fetuses and use that legal status to re criminalize abortion.
"Part of the smokescreen that the Motion represents is that the anti-choice movement has adopted the framework of human rights to make their arguments.  This is including supposedly 'woman-centred' arguments, such as claiming that abortion harms women, and conflating fetuses with people by calling them 'human beings' and 'children'," she told The Vancouver Observer.
"The anti-choice movement has trouble with the whole concept of human rights, especially women’s rights," Arthur said.
She went on to point out that Woodworth is a public supporter of the pro-life position, citing his appearance at the March for Life rally in May. Woodworth has also appeared in press conferences for pro-life groups.
Motion 312 is widely believed by political spectators to fail in the September 26 vote, with the majority of MPs and Prime Minister Stephen Harper publicly stating their opposition.
Read More:
Share on Facebook Share on Twitter

On Canada's abortion position abroad, PEI exerts influence. But should it?