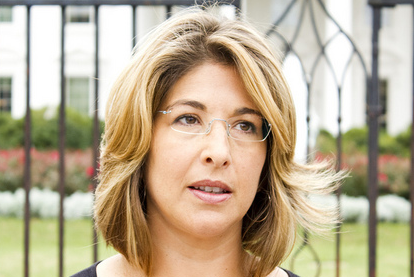 Canadian author and activist Naomi Klein called the Canadian government a "global advertising agency" for the oil industry and spoke in detail this week with the Vancouver Observer about  her recent arrest at the White House while protesting the Keystone XL oil pipeline alongside First Nations leaders.

Citing a television "media blackout" and tactics of intimidation in the U.S.,  Klein had much to say about the controversial Alberta-to-Texas pipeline, which has been opposed by indigenous groups, activists and Nobel Peace laureates.

“The Harper government ... has completely abandoned any pretext of representing the people of Canada and indigenous people on this," Klein said. "Oil companies have enough money to do their own lobbying. They don't need the Alberta and Canadian government traveling around the world as traveling salesmen for them, yet this is what they're doing. The idea that they can in any way be trusted by indigenous people living near the tar sands. That's why people went to Washington to take a message directly to President Obama.”

Indigenous groups, in particular, have a "lot to lose" if the pipeline project is approved, as the pipelines would cross Native lands and potentially contaminate drinking water, the author of "The Shock Doctrine: The Rise of Disaster Capitalism", said. So far, Canada's Environment Minister Peter Kent has voiced support for the project, citing findings in a government report that the pipeline would have minimal environmental impact.

Putting bodies on the line

Although Klein told the CBC last week that she hadn’t planned on being arrested, she said that it was a risk that she and others took in order to get the message across to President Obama.

“It was interesting because at the start of the protest you would see a lot of older people being arrested,” she said. “(Environmental writer) Bill McKibben had wanted that, in the original letter he wrote (to invite people to the Keystone XL protests). He said you can’t just leave the risks to this to young people.”

Klein said that although older people were among the first to take on the sit-in protest, the protesters that she met on her way there were primarily young women in their 20s. Protesters varied from actress Darryl Hannah to NASA chief James Hansen to aboriginal leaders from both sides of the border.

Klein said the U.S. appeared to be taking a “tactic of intimidation” during the first round of arrests, when it held McKibben and others for three days in jail. However, the arrests failed to scare off others from joining the protest.

“It backfired,” she said. “Later, there were so many people getting arrested that they had to let some people out because they didn't have enough room. On the last day, over 240 people were arrested.”

Klein said that she was held for a total of three hours before being let go.

“We were treated respectfully,” she said. "It's not fun, having your hands cuffed behind your back for three hours, but it was done as polite as it could have been.”

Among the protesters, Klein said, were many people who had supported Obama’s presidential bid in 2008.

“I met some really wonderful young people who had busted their butts working for Obama,” she said. “I think politically, it’s very important for Obama to see. With this next election, he has to think about the people who knock on doors and sleep on floors for him. It's not as if he's going to lose these votes – but will they work for him? That's the real question.”

She said she was relieved to find that many young people who had worked to bring Obama to power hadn't given up on their political engagement.

“It was always in my fear that Obama would breed a new generation of cynics,” she said.

“People whose hopes he had raised, through soaring speeches -- the issues that engaged them were essentially abandoned by the President. I think what was exciting was that people weren't just giving into that cynicism. They were trying to hold Obama accountable for the hope he inspired in them and finding other ways to do politics than just working for a politician. I was really heartened by that.”