"So now, I'm going to turn around and walk up this hill -- and be the best citizen I can be," said Quarmby, before crossing police tape and getting arrested. 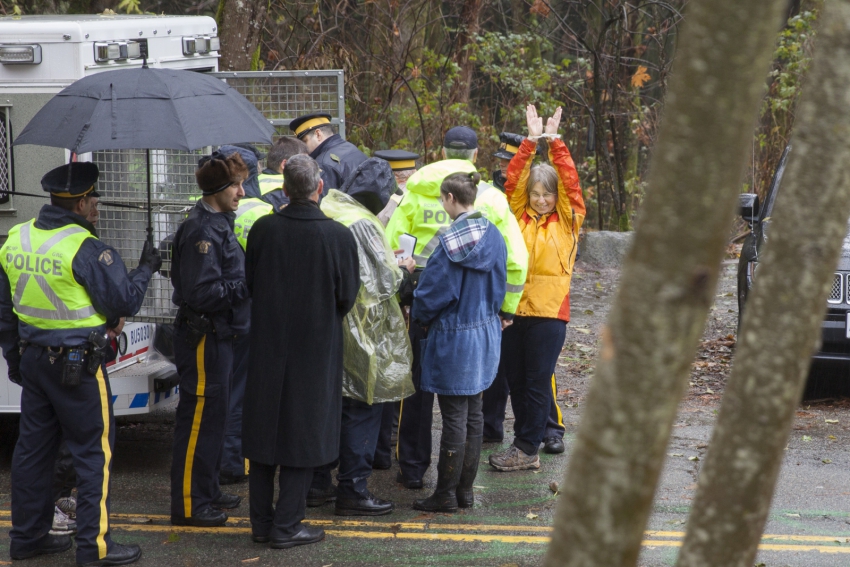 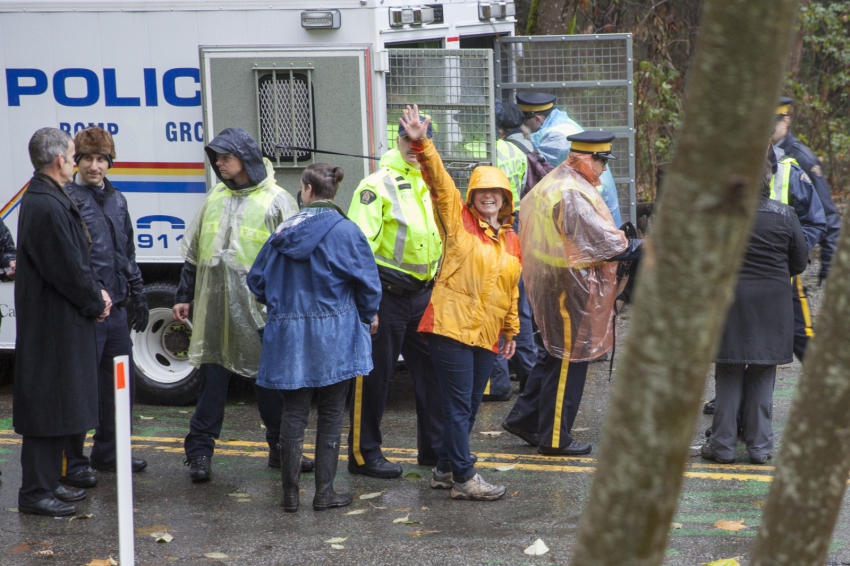 Lynne Quarmby, the chair of SFU's molecular biology and biochemistry department, and a face of public opposition against pipeline giant Kinder Morgan, has just been arrested at Burnaby Mountain.

"The reason we're in this predicament here in Burnaby has to do with the Conservative Harper government and what they did at the end of 2012 in the omnibus bill that stripped environmental regulations," she said in a speech minutes before her arrest.

"The NEB process is now a sham... We have a process that does not allow consideration of climate change... at a time that climate change is the biggest problem facing humanity. It's unethical. The new NEB Act is written as requested by the oil industry."

"At the end of the day when you're dealing with unjust law and abusive power, the last resource we have is civil disobedience. It's done in full respect of the rule of law. But it's also done with serious responsibility with being a citizen in this country," she said, as cheers erupted.

"So now, I'm going to turn around and walk up this hill — and be the best citizen I can be."

Soaked by a heavy downpour of rain, the scientist then turned her back to the crowd and walked calmly toward the police lines on Burnaby Mountain.

Video of Lynne Quarmby getting arrested, and her speech on civil disobedience on Friday.  Shot and produced by the Vancouver Observer.

Arriving at the police tape, an RCMP officer warned her: "You are in a position right now, to be arrested okay?"

She then tried to move past the officers. Initially, they would not have it. They crossed their arms, and shook their heads. Undeterred, Quarmby quietly walked around the police line, and set foot inside the injunction zone.

At that moment, she was arrested, and brought to a police van where her wrists were cuffed with plastic strips. She raised her bound hands triumphantly.

Some in the crowd cheered, "We love you Lynne!"

An RCMP officer warmly patted her on the back, then directed her into the police van. Going with her was Voters Taking Action against Climate Change spokesman Kevin Washbrook. A total of four women and three men were put in the police vehicle.

RCMP eventually charged Quarmby with Civil Contempt.  She was later reached by phone, minutes after she was released:

“Oh I’ll be pleading guilty. Because I knowingly violated the injunction," she said.

Quarmby first came to public attention in mid-October when she published an op-ed in the Vancouver Observer, stating her willingness to be arrested.  It seems that intention has become reality. But before it did, she discussed it with her family yesterday.

"I have a 27-year-old son. I had a conversation with him last night," she said. "He, of course, will be impacted (by the arrest). He understands all the risks I'm taking. But he supports me 100 per cent and is very, very proud of what I'm doing."

She said he has also been flooded by messages of support.

She said youth were on her mind as she spoke out against Kinder Morgan — a Texas-based pipeline giant founded by Rich Kinder, a former executive at Enron.

Kinder Morgan is currently proposing to twin the existing Trans Mountain pipeline by running a pipeline through Burnaby Mountain to triple bitumen capacity from Alberta's tar sands to 890,000 barrels per day.

The project has sparked heavy citizen opposition, in part because it would multiply the number of oil tankers through Burrard Inlet seven-fold if approved.

Arrest of a university department chair

The arrest is only the latest in a long list of unexpected events for Quarmby.

As head of Quarmby Lab, she says she's never been active in any protests, but felt forced to become more vocal because of the federal government's pursuit of fossil fuel extraction and inaction on climate change.