"I had a good day!" McLaren told a reporter, before ducking into a police vehicle. 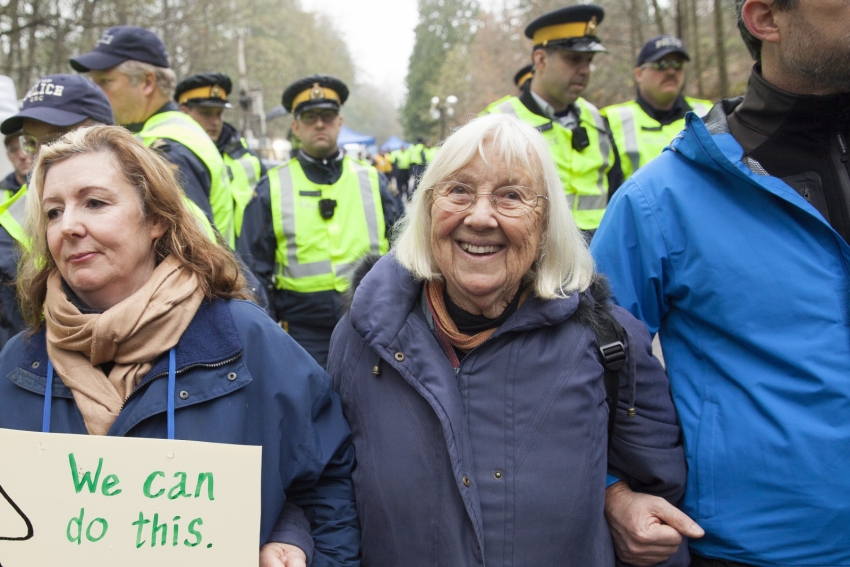 Jean McLaren, 87, on Burnaby Mountain seconds after crossing the police line at a Kinder Morgan pipeline protest on Wednesday. Photo by Mychaylo Prystupa.

In a sign of how fearless citizens have become in defying Texas-based Kinder Morgan's court-ordered injunction, even an 87-year-old crossed the police tape on Burnaby Mountain to protest the company's pipeline.

"It matters. We can't let it happen," said Jean McLaren, on Wednesday.

"I want something for my kids, and my grandchildren. I want them to be able to grow up and live, and not be dying [from climate change] like a lot of people are."

It left the RCMP scratching their heads with how to handle her. McLaren opposes the company's proposed Edmonton-to-Burnaby pipeline, over grounds it worsens climate change.

While some protesters have been forced to the ground, cuffed, and carried away yelling, this was not the case for McLaren.

The frail grandmother was greeted with smiles by the RCMP.  A lead officer then leaned over to ask where he could put her.

"Well I'm not going to sit on the ground," she laughed. The officer chuckled, "OK," and conceded her point.

McLaren impressively climbed the steep roadway on Burnaby Mountain for ten minutes to reach the summit where Kinder Morgan drill crews have been controversially under the RCMP's protection 24/7 since November 19.

When the moment felt right, she walked arm-in-arm with fellow activists to pass the police tape. She turned slowly to grin for the array of TV cameras, photographers and cheerful supporters.

McLaren said she's been in protests since 1947, in everything from peace movements to environmental issues. In a protest in Israel, she was put behind bars.

"I was there with the Palestinian people. It's the only time I've been in jail. Every other time, they let me out!" she laughed to reporters.

On Burnaby Mountain she stood with four veteran activists from the famous 1993 Clayoquot Sound protest on Vancouver Island that saw some 800 people get arrested.

Thirteen people were arrested today, according to organizers, bringing their estimate of the total number of arrests to 103. Among them were a retired I.T. professional and a former UBC French professor.

Most were processed by RCMP peacefully.  But two men were roughly handled by several officers to force their compliance into a police van.

It's not clear if McLaren was charged with anything.  Within an hour of being taken into custody, she was gingerly escorted back by officers in front of the police tape to an black-windowed SUV, to cheers from crowd.

"I had a good day!" she told a reporter, before ducking into the vehicle.

About two hundred people were assembled on Burnaby Mountain Wednesday morning — a crowd dominated by many seniors. 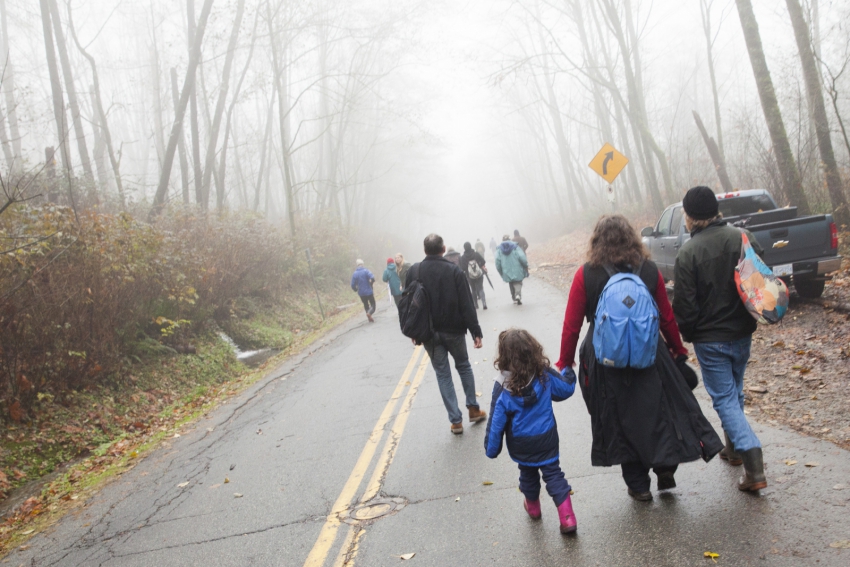 Parents with their children on their way down Burnaby Mountain, after attending the Kinder Morgan protest on Wednesday.  Photo by Mychaylo Prystupa.

The journey from the base of Burnaby Mountain to the police line is a beautiful, treed corridor that has become a bit of a pilgrimage of sorts. Many parents bring their children, and today the walk was accompanied by a senior's choir named "Solidarity Notes" that sang songs such as "We Shall Overcome."

Many are likening this pipeline struggle to colossal social movements of the past, such as the fight over racial discrimination, and women's right to vote.

"Trans Mountain is hopeful individuals occupying Burnaby Mountain will respect the order  delivered to protestors November 17 and exercise their rights to express their views in a peaceful and lawful manner, while allowing our team to get the work completed."

"We believe it is possible for people to protest and express themselves while we commence our field studies safely."

You can click here and go to an index of all the Vancouver Observer stories on the Kinder Morgan (Trans Mountain) Pipeline.