RCMP: "You'll be violating the civil court injunction, and you'll be taken into custody and arrested.  Do you understand?"  Grand Chief Stewart Phillip: "Yes, I understand." 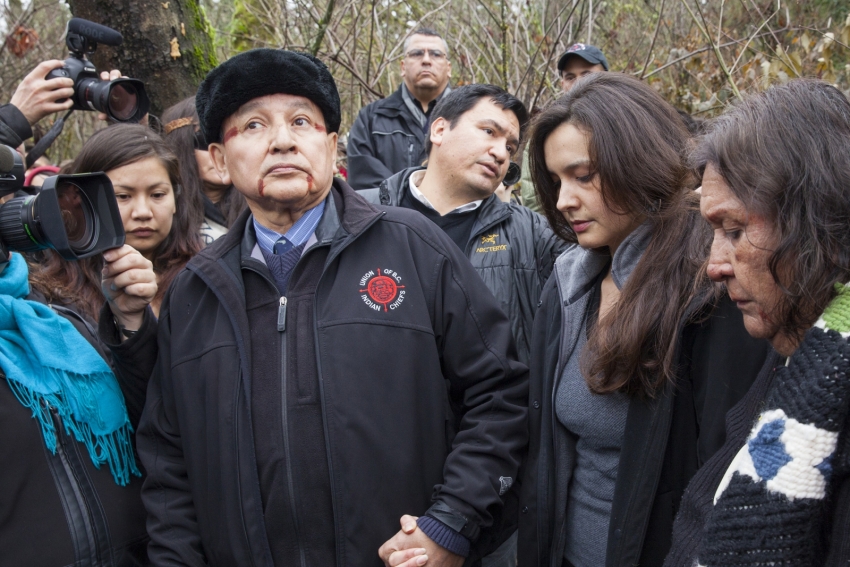 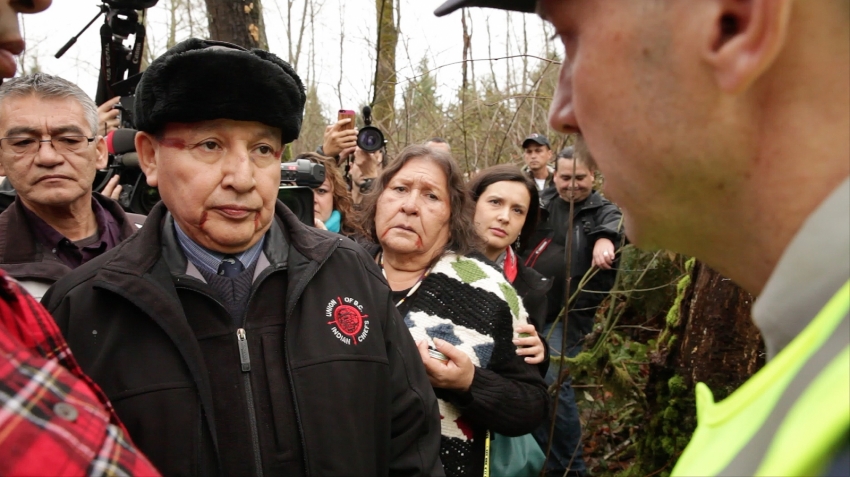 Grand Chief Stewart Phillip has long said that he would be prepared to risk arrest to oppose an oil sands pipeline. Now that has happened.

Wearing sacred red ochre paint on his face, the Union of BC Indian Chiefs' leader approached an RCMP officer deep inside the conservation forest on Burnaby Mountain.

Standing between the two men was a police tape, the border of an injunction zone guarding Kinder Morgan drill crews, who were busy drilling deep holes for the company's hoped for $5.4-billion Trans Mountain pipeline expansion project.

"If you come past this [police tape]," said RCMP Sgt. Andy LeClair to Grand Chief Phillip, "you will be violating the civil court injunction, and you'll be taken into custody. I'll be arresting you."

"Do you understand?" asked Sgt. LeClair.

"Ok, sir, I'll let you make your decision, I'll be standing here in person to take you into custody, and obviously I want to do that with as much dignity as possible," said the Sergeant.

Two hundred people witnessed as the Grand Chief then climbed under the police tape. LeClair extended his hand and arm, to respectfully assist him to an area where he was arrested.

A First Nations song broke out; drummers played. The Vancouver Observer video recorded the moment seen by many as historic.

Following the Grand Chief, Tsleil-Waututh elder Amy George, crossed as well. Other non-First Nations citizens crossed the police line too, including a yoga business owner, a retiree, and a physician.

The prominent Grand Chief's arrest highlighted the ongoing opposition of First Nations to the Kinder Morgan expansion, with the Tsleil-Waututh in particular leading a court case against the project. 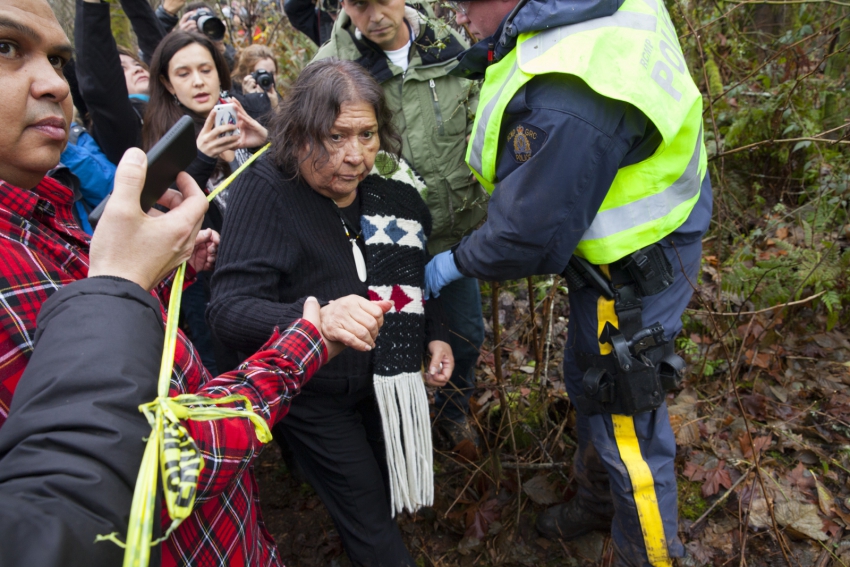 "This is my second time seeing the beautiful Burnaby Mountain," said Phillip, referencing a Kinder Morgan protest he attended in September.

"I'd said then, alongside my dear wife Joan, that if push came to shove with arrests, I would stand with courageous people who were being arrested. That's why I am here today."

"I'm here to cross the line and be arrested in solidarity with the 100 people who have chosen as a matter of principle to demonstrate their opposition the Harper government vision of $600 billion development of natural resources in British Columbia," he said.

"I am a grandfather of 14 incredible, beautiful grandchildren. This is about the future of all of our grandchildren... I say we need to reclaim this province from the predations of the Harper and Clark government and return it to the people."

Other First Nations standing at the Grand Chief's side also denounced the incursion of the test drilling work.

"Warrior up!" people shouted, as a First Nation member from the Tsleil-Waututh Nation, Amy George, denounced the environmental and health damage caused by oil companies in Alberta's oil sands.

"I'm a warrior, and I will fight for this land," she said, breaking into tears.