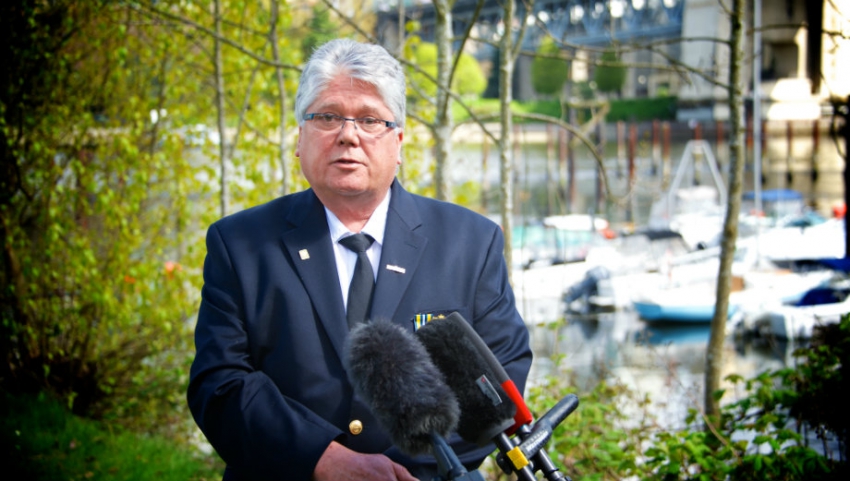 Retired Commander Frederick E. Moxey said based on his experience, government claims of having contained "80 per cent" of the English Bay spill were likely false.

“I’ve been in hundreds of spills and never seen an 80 per cent recovery," Moxey said. "Usually you recover 30 per cent at most, more like 10, and that’s with an immediate response and a trained crew with sponges and straw pulling the oil out by hand.”

Although recovery is not the same as containment, Moxey suggested the federal government was overstating the success of its response. The "80 per cent" figure was repeated at a press conference by the coordinated response team today at Canada Place.

Moxey, a 35-year Coast Guard veteran and former commander of the now-closed Kitsilano Coast Guard station, said the numbers reported by government are likely based on observation and aerial photography which fails to show the full reality in the water.

“They need to send cameras to the bottom of the bay to see what made it down there.”

Despite ongoing criticism, the current federal Canadian Coast Guard head reiterated today that the response has been "excellent."

Despite the coordinated response team and Premier Clark's suggestion that in the future the province should take the lead, the federal government remains the authority in charge of coastal clean-up. Moxey said that under the Harper government, coastal and marine response services has been amalgamated.

He called this "a horrible practice," meant to cut costs and push capacity away from the Coast Guard and onto partnered private enterprises.

The 2013 closure of the Kitsilano station has been under scrutiny since the spill. Moxey said before the closure the station was the busiest on the west coast, responding to over 300 calls per year. He sent hundreds of pages of documents to prove this to Conservative MP Andrew Saxton through official channels, he said, but received no response at the time.

Reached for comment on Monday, Saxton initially evaded the question, giving a generic answer about "regular updates on this important issue."

When pressed for a direct response, he said:

"I have received correspondence from Moxey regarding the Kitsilano Coast Guard station. I acknowledged these messages in detail more than once with our government's position on the importance of maintaining our world class search and rescue (SAR) capabilities, as well as the nature of this operational decision made by the Canadian Coast Guard."

Moxey said he has never received correspondence from Saxton's office, although Saxton stated he has sent numerous responses explaining the federal government's decision.

Not prepared for large oil spills?

Moxey said this spill was small – less than 2,900 litres of fuel,  likely dumped from the ship’s bilge. He was visibly disturbed as he spoke about his lack of confidence in the cash-strapped Coast Guard's ability to deal with a larger incident.

"You can't remove the possibility of human error. They are in no way prepared for a catastrophe," he said. "It'd be years to clean it up."

From the lookout point on the west side of the Burrard Bridge, the blue two-storey station at Kitsilano can be seen with English Bay as its backdrop. Anchorage 12, occupied by the Marathassa, is in view and according to Moxey the response time from the former station would have been six minutes.

At the press conference on Monday, which officials said was "day four" of the spill response (the spill occurred on April 9), Commissioner of the Coast Guard Jody Thomas stated that the Kitsilano point station was mainly a search-and-rescue facility. She prefaced her comments by saying she monitors the entire Coast Guard operation across Canada from her office in Ottawa. She said the closed facility has been used for storage after the spill, but said having the Kitsilano station open would not have made any difference in the spill response.

Moxey contradicted this, stating that the Kitsilano base responded to oil spills as well as search and rescue before it was shut down.

"It was a 24-hour-a-day operation," he said. "All the officers and crew at Kitsilano were trained and had responded to oil spills as well as search and rescue. For her to say that is just false and I will sign an affidavit declaring the fact we were and had been called to respond to spills often."

When questioned about differing reports on the performance of coordinated response to the English Bay spill, Thomas refused to be involved in a "comparison of adjectives" with reporters and stated the station at Kitsilano would have made no difference in the treatment of the English Bay spill. Thomas continued to say the response was adequate and well within the 10 hour time-frame legislated by the federal authorities. 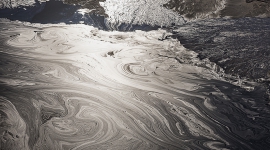 Hot temperatures.  Raging conflicts. From ground zero of climate change, a crowd-funded series on energy, people, and the environment.