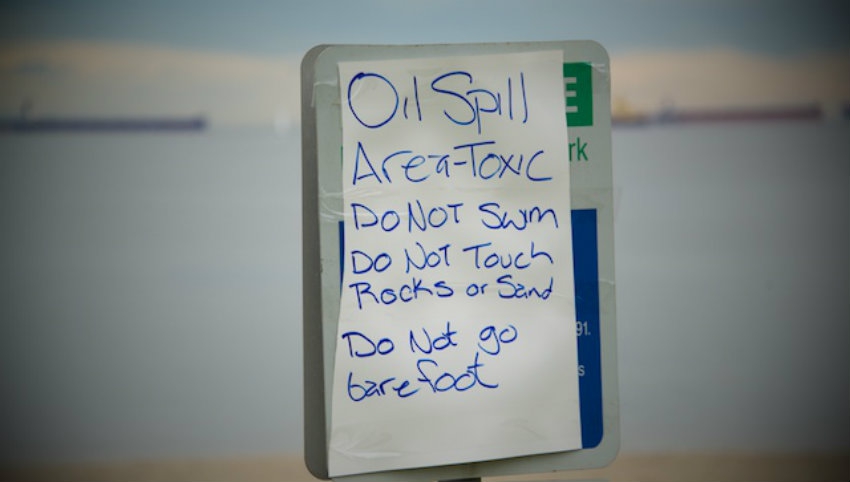 It took six hours for the Coast Guard to build a containment boom around a toxic spill at a deep-water anchorage off English Bay and 13 hours before City authorities were notified. Now the City of Vancouver has advised residents to stay away from globs of toxicity washing up on shore and 3 oiled ducks are in a rescue care unit -- with growing fears that all this foreshadows an approaching catastrophe.

Mayor Robertson said this morning that efforts to contain the spill failed.

“We don’t know if this is a long term hazard. Clearly it has spread further than originally reported,” he said, and the blame, he said, lies with gaps in the coordinated response by provincial and federal government.

“If this had been a larger spill it would’ve been a total catastrophe,” he said in an address to reporters gathered at English Bay.

Mayor Robertson said phone lines at City Hall have been inundated with calls from residents eager for updates on the clean-up. He urged caution as the composite chemical involved are unknown and no-one is certain what has washed up on shore. Yesterday’s confirmation of a “Bunker Fuel” leak has now been changed to an unknown source and reports of coastline contamination now reach as far as the North Shore and Sandy Cove with more expected in the near future.

After the Mayor’s address, a group of concerned citizens led by activist Shirley Samples and Musqueam First Nation member Audrey Siegl unfurled a banner that read “We Love This Coast” and vowed to begin the cleanup themselves.

"There are people here who love this coast so much they are willing to die to protect it. You've now met some of them," said Samples when asked about the City's advisory to stay away from the toxic sludge.

As Mayor Robertson inspected the damage at English Bay – Premier Clark addressed a select group of reporters from her office in Canada Place. Clark said she sympathizes with the Mayor.

“What I hear from him is real frustration," she said. "He probably doesn’t have a real understanding of how the unified command works, so I hear that frustration.” The Premier went on to note her disappointment at delays in notifying the City of Vancouver of the spill at the port, which she called the “busiest in Canada” and went on to note this was problem is not due to a lack in resources.

At the Clark briefing, the premier dodged reporter questions about the Province’s delayed response and her absence from public view. In response, Clark said “What we were concerned with was making sure we had all the facts – I appreciate the frustration when you can’t get a camera on a politician.” Clark also said given the situation, finger pointing is inevitable and lobbied for more Provincial control of coordinated disaster response, “if the Coast Guard is taken out of lead and put under the direction of the province, then perhaps this would be a better way to do it.”