"Does anyone else feel like this is maybe a little exploitative?" 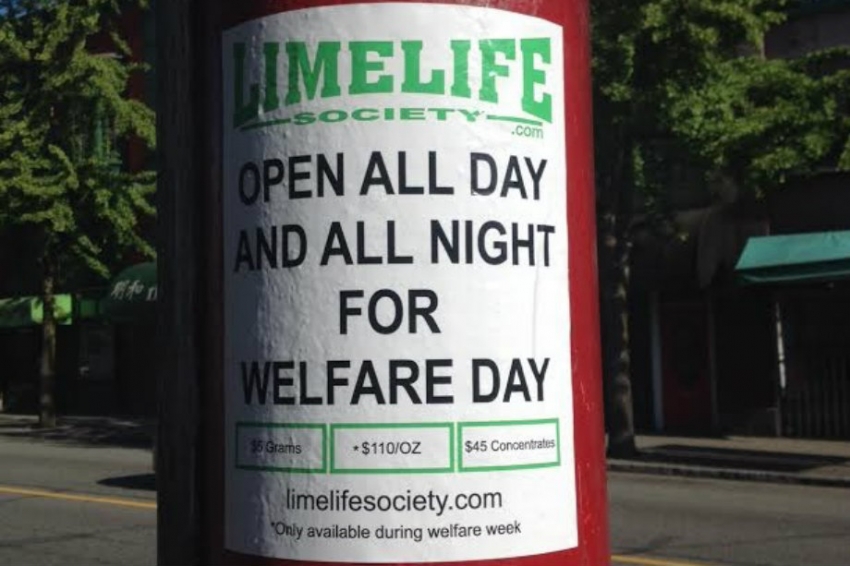 A controversy unfolding on the pages of Reddit added fuel to the debate about marijuana sales in Vancouver.

A Reddit thread entitled "Seen in the DTES: Does anyone else feel like this is maybe a little exploitative?" includes the above photograph of a sign advertising the dispensary chain as "open all day and all night for welfare day."

When reached by the Vancouver Observer, a representative from Limelife, who declined to be named, stated the signs were not theirs, that their hours remain unchanged, and they are under attack in a slanderous campaign from an unknown source.

Minutes later, the representative phoned back and retracted the statements to a "no comment."

The spokesperson requested they not be mentioned by name as they have a "nine to five" and do not want to to be attached to the stigma of moonlighting in an industry operating outside of current federal law.

Tannis Braithwaite, Executive director of the BC Public Interest Advocacy Centre, said, "lives of people living on welfare are hard enough without some jackass adding to the insult.”

New rules proposed by civic government under business and zoning authority include a fee for business licenses, a stipulation prohibiting marijuana businesses operating in close proximity to schools, community centres or other marijuana businesses— and a demerit system meant to ensure the storefronts abide by a standard of practices.

Potential profit margins have attracted many new dispensaries to open in the past few months. As of May 1, 2015, 93 dispensaries have been identified in the city of Vancouver, an increase from 61 in February.

The Vancouver Police Service maintains the position that marijuana businesses are illegal but not a high priority until they become a public nuisance by selling to children, allowing members to smoke in their stores or other prohibited practices.

Sgt Randy Finchem said an ad campaign like the one alleged in the signs on Vancouver's Downtown Eastside would put the offending dispensary "on our radar for further investigation."