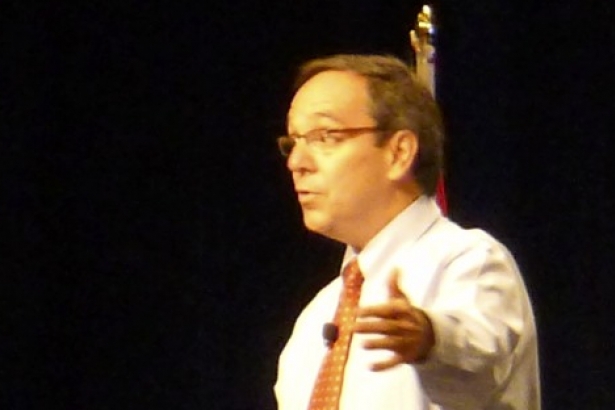 Living in a living city

"We learned how to survive. Now we have to learn how to live." So says Gil Peñalosa, Executive Director of 8-80 Cities and keynote speaker at the Moving the Future conference here in Vancouver.

Mayor Gregor Robertson noted in his welcoming speech that the transportation decisions we make— or refuse to make— will profoundly shape the future version of the Metro Vancouver area. He said that there was already “an incredible amount of agreement about what we need to do,” but the very existence of this conference suggested that such agreement is not universal. Robertson said that we definitely need to invest in more transit, as well as promote walkability: "We’re not going to attract the best and brightest students from all over the world... if they’re spending a couple hours a day in transit.” 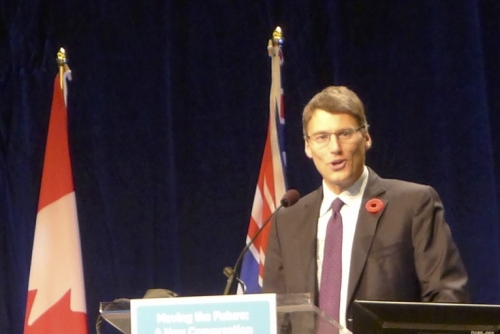 After all, as was repeated over the course of the day, Metro Vancouver is expecting another million people to call this area home by 2046, not getting ahead of the transportation issue will knock Vancouver off its most-desirable-city pedestal. Robertson was optimistic, though, saying, “We have every reason to believe that we can take our transportation network from good to great.”

Surrey Mayor Dianne Watts lamented her own commute to the Convention Centre this morning: the drive took over an hour when leaving at around 6am. Had she opted to take the SkyTrain, it would not have helped much: Watts would still have had to drive 30 minutes to the nearest station.

Watts was the first to mention The Gateway, our portal to the rest of the Asia-Pacific region. Watts said that we have 28 major marine cargo terminals in 16 metro-Vancouver cities, as well as over a million trucks crossing the border annually and $1.9billion worth of goods transported by train. Congestion, said Watts, costs us $1.5 billion annually. “Getting people out of their cars, cars off the road, you’re lessening congestion. It’s not rocket science.”

It is, however, political science, which Peñalosa would mention later on. 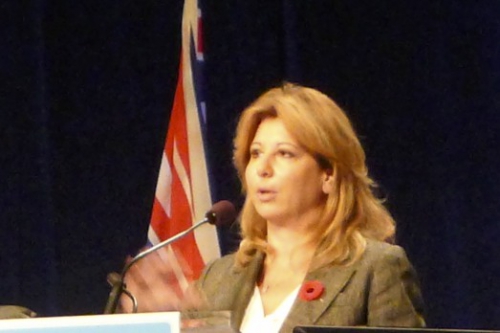 “The investment we make in this region has to be significant, "Watts insisted, and that we must “put politics aside and ensure we’re doing the right thing for the future.”

The British Columbia stereotype may involve lumberjacks, but our real industry is veering towards the service economy. Ken Peacock, Chief Economist and Vice President of the Business Council of BC, noted that our trajectory takes us towards a stronger connection with the rest of Asia-Pacific. Basically, we’re hitched to China’s rapid-development star. Metro-Vancouver growth eclipses that of any other part of BC said Peacock, “more than double what’s happening in the rest of the province."

Peacock (who also had a crappy commute) noted that our exports to the Pacific Rim are now equal to what we export to the USA, adding that the transportation and logistics industry plays an important role in the expansion of that service base.

Roads, tracks, and SkyTrain lines are the circulatory system of Metro-Vancouver, and we need a strong cardio program to get our region through this next growth spurt. That growth will come from education and training, business and tourism markets for the rest of the province, employment opportunities, head offices of companies that operate elsewhere, and gateway connections, Metro-Vancouver is the linchpin for British Columbia’s health; and a healthy metro region depends on efficient growth of our transportation infrastructure.