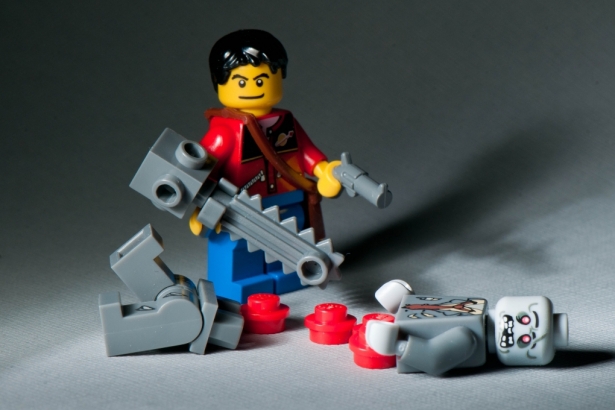 In a zombie apocalypse, it is only natural to think of guns, swords, or pointed sticks as your most powerful weapons against the shambling hordes of walking dead. But there is one weapon of equal, if not greater power, often overlooked in standard survival preparations: philosophy.

Yes, weapons are good to have, but you do better to arm yourself with a bit of basic logic if you want to navigate the post-human afterworld.

Below, you will find a logical proof, presented informally, that zombies hunt by smell. As it happens, this is also proof that philosophy might just save your life.

The first thing we need to establish is that zombies do not think. They are automata and operate only according to their basic instinct to feast on the flesh of the living. I think this follows from a basic definition of apocalypse-style zombies, and is therefore obvious.

Regardless, this is an important point, since it means that they are incapable of making judgments based on sensory input. They can respond to stimuli, but that is it. Zombies simply cannot look at you and say “Hey, that’s guy’s just limping! He’s not dead at all, get him.” That would involve a thought.

Second, zombies do not attack one another. I think this too is pretty obvious, and thus requires little or no defense. Zombies become zombies because they are infected with a virus. The whole point of a virus is to infect new hosts, something which is not accomplished if those infected simply eat each other.

This point is crucial, since it means that zombies need some way to distinguish between the living and the dead. As we already know, they can’t rely on judgments because that involves thinking and zombies can’t think. Their only option is some basic sensory cue. So now the question is which of their senses they need in order to pick out the living from the dead.

If you watched the season premiere of The Walking Dead, you saw Rick encounter a woman who, at first, he believed to be a walker. It was not until she spoke that he realized she was alive. Until then, she appeared to move like a zombie, she looked like a zombie, and she sounded like a zombie.

This example demonstrates that neither sight nor sound is sufficient to distinguish between humans and the undead. If Rick couldn’t tell, how could a mindless walker? So, if zombies only used vision and hearing, they would not consistently be able to tell the living from the dead, and would surely commit occasional errors and attack each other. But we already know that they don’t do that.

Obviously, touch and taste are not useful for hunting because the zombie would need to get too close before it could tell whether or not you were food. Besides, this belies the actual behavior of zombies. They don't go around groping and tasting everything within reach until something tastes like people.

We know that they can sense us from a distance, so clearly touch and taste are not relied upon heavily by hungry zombies. But neither are vision or hearing sufficient to protect against errors. This only leaves one sense: smell.

Only smell can distinguish us from them conclusively. Specifically, only smell can account for why zombies know to attack us and not each other. We smell like people. Zombies smell like dead people.

It is possible that a zombie might happen to move, sound, feel, or even taste like a living person (provided that it’s a really fresh zombie). But there is no chance that it will smell like a living person. Therefore, zombies need a sense of smell, since no other sensory tool is sufficient for carrying out their trademark activity of feasting on the living, and only on the living.

Use the results of this proof however you see fit.

But consider this scenario. You and a fellow survivor are surrounded by hungry zombies, their teeth gnashing as they slowly close in on you. Your companion has a gun. You have compost. The other guy heroically makes a stand, gunning down zombie after zombie with precise marksmanship. You smear yourself with compost and discretely wander off, your personal aroma masked by rotting organic waste. He will run out of bullets long before you shed the stench of death.

There. Philosophy just saved your life.

How to be super stupid and super smart about the apocalypse