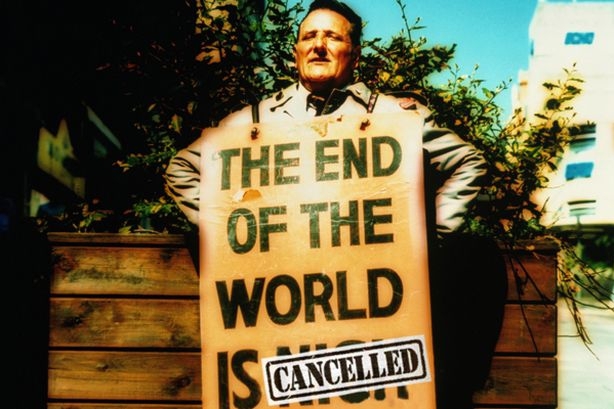 Many concerned citizens went to great lengths in preparation for the Mayan apocalypse of 2012. For the record, it didn’t happen. And while most of us are simply left with an overstocked pantry full of dry goods, some folks really went all-in, only to be disappointed when December 22nd rolled around and they weren’t dead.

Perhaps none went to greater lengths than Martin Purdue, a Private in the U.S. Army. According to Duffelblog.com, Purdue’s curiosity was piqued by the John Cusack film 2012. After seeing it, he was inspired to conduct his own research. So where do you go for reliable and complete information from trustworthy sources? The internet of course! What could possibly go wrong?

Flash forward to this past November, when Purdue put his knowledge to use by taking out a $200,000 loan from Honest Mike’s Loan and Liquor Emporium at a mere 47% interest. (I’d hate to see what rate they charge over at Dishonest Mike’s.) As the story goes, he then proceeded to blow that cash on high-end calls girls, WWE tickets, energy drinks, and a brand new lime green Mustang which came in at just over $65k. However, Purdue was clever enough to take the Mustang for no money down.

He also re-enlisted in the Army for seven years so that he could take advantage of a $15,000 bonus, which he then turned around and spent on a full back tattoo of an eagle sodomizing a bear beneath an American flag (I promise that I have not made this up). Underneath is the motto “Death before Dishonor.” In retrospect, that slogan might be a little ambitious for a guy who just blew a couple of hundred grand on prostitutes and a tattoo of interspecies sodomy.

On the night of December 21st, Purdue reportedly indulged in a cocaine binge and a hooker named Chastity who, when the world did not explode, walked away the next morning with $6,000 in cash and the keys to his Mustang. Meanwhile, Purdue was left to nurse a whopping headache and the inevitable sense that he is a complete jackass.

Despite ruining his financial life and risking the ire of Honest Mike, Purdue’s blundering pales in comparison to the billions of rubles spent by Russians in preparation for the big day. The Russian company RBK estimates that Russians spent all of 30 billion rubles getting ready for 2012. Converted into dollars, that’s equal to at least fifty or sixty bucks.

Many Russians bravely bought one-way tickets to Mexico so that they could witness the end from the home of the Maya. Others took courses where they learned how to stock up on water and candles. Some built bunkers. Others flew to the tropics. In total, it seems that three percent of Russians believed in the Mayan apocalypse, while about 14 percent were motivated to make some kind of preparation. For a nation of 143 million, that’s about 4.3 million believers.

One such believer was an unnamed Siberian man who refused to pay 1,000 rubles in traffic fines based on his belief that the apocalypse was less than a month off. When debt collectors came to his door, he greeted them with a series of charts which clearly indicated that doomsday was upon us. Says a Russian website, “The debtor believes that if people are kinder to each other and forgive each other's debts, the world will not end.”

So, Russians are stupid, right? Not so fast. Russians were honestly preparing for the end. What were we doing over here in North America? Looking to get laid. A headline from the December 20th New York Post reads “NYers who believe in Mayan apocalypse search for sex before the world ends.” Sites like Craigslist and OKCupid saw a rush of folks looking for casual hookups. One 30-year old man from Manhattan posted “If you’ve got no plans for the apocalypse, let’s get together.” He continues, “Send me how you’d like to spend your last hours on earth — and a photo.” A photo? Is it just me or is the apocalypse a little late to be getting picky about looks?

In the end, it’s starting to look like our intrepid Private Purdue wasn’t so far out there after all. In fact, it looks like the only difference between him and the average apocalypse-believing New Yorker is that he actually went for it. Anyone can post an ad on Craigslist with a clever title like “Sexpocalypse Now” or “Doomsday is Humpday.” It takes a serious pair of balls to borrow 200 large from a loan shark and blow it all on hookers and wrestling. Not brains, just balls.

Of course, there is another lesson, and this one is serious: as a people, nay as a species, we need a World Cup of Stupidity. So vast are the reaches of human idiocy that it would be a nearly criminal waste to go yet another year without commemorating the absolute dumbest of the dumb. Now I’m not saying it will be easy. There will be intense competition from thousands upon thousands of career idiots. Their ingenuity will be unprecedented: creative stupidity is one of the main activities of people everywhere. It’s about time somebody honored it.

The closest thing, historically, to a World Cup of Stupidity would probably be the now defunct World Stupidity Awards or else the infamous Darwin Awards. But the WSA just got so political and the Darwins have always been too selective. No, we need something that celebrates everyday stupidity, something to let ordinary folks know that they can be the “most” something too. Now all we need is an iconic trophy. I’m thinking something in an eagle-bear sodomy theme.