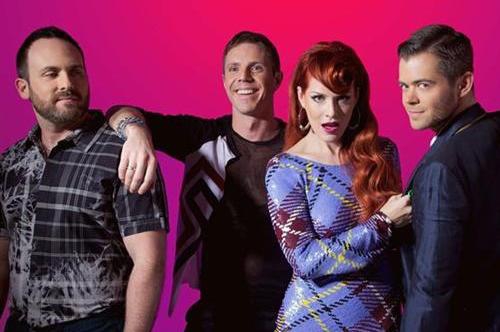 With respect, the Scissor Sisters are not ones to compromise their rainbow-tinted vision. The "Filthy, Gorgeous" hitmakers used a flexed male derrière as the cover of their last album, the phenomenal Night Work, as a "fuck you" to critics who had accused the band of turning from the gay fanbase that made them famous.

But, as evidenced by the schizophrenic quality of their new album Magic Hour, a little compromise, a reining-in, would have been a good thing.

This time around, the Scisters invited the likes of Calvin Harris—the DJ and producer responsible for Rihanna's hate-it-or-love-it "We Found Love"—Pharrell Williams, and Major Lazer's Diplo to their party. However, it's best to dash the expectations you now likely have upon reading those names. Magic Hour does not consist of dance hall bangers and house experiments.

That's not to say that the Scistors haven't dipped their cup into the mainstream, because they have—this is obvious from one listen to first single "Shady Love". It's hilarious for anyone who's ever thought they'd like to hear Jake Shears rap (and trust me, you do). 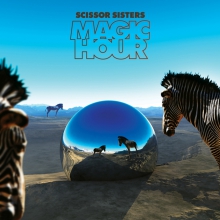 "Self-Control" is total, no-remix-required club fare, made easier to swallow by Shears' Vodka-smooth vocal delivery. And "San Luis Obispo" is sunshine pop of the most accessible order, set slightly apart with a plácido Latin flavour.

On the other hand, "Let's Have a Kiki" might be the campest thing they've ever done—and that's saying something for the band that gave us a disco cover of Pink Floyd's "Comfortably Numb"—and while you won't understand what exactly a "kiki" is even after listening to the song, it sounds fantabulosa, honey.

"Keep Your Shoes" is a dance number, but with shout-outs to Benzadrine and mail-order brides, it's strictly for the freakiest of folk.

And then, on the other-other hand, there are all those ballads.

Shears comes down from his magic dust and puts his big-boy pants on for "The Secret Life of Letters", a kind of Muse-lite piano elegy for love. "Best In Me" is a heart-eyed mid-tempo ode that's too love-blind to see that it's oozing with sap, and "Somewhere" closes the album on a downbeat note.

If you're a little confused as to how hip-hop impersonations and self-indulgent ballads go together, welcome to the club.

Magic Hour isn't the super-relevant, super-hip soundtrack to 2012 the usually trendsetting Scissor Sisters might think it is. It actually reminds me of fellow queer star Freddie Mercury's all-over-the-place solo album, more than anything.

Despite their valiant efforts (again, Jake Shears raps), the Scistors' true magic hour remains in the past.

The band hits Commodore Ballroom June 20 (buy tickets here). Watch the new video for "Only The Horses" below.

Spice up Monday night with rhythms from Spain