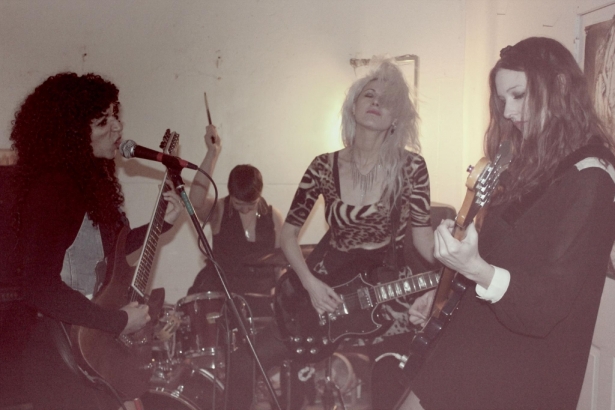 My interview with Vancouver thrash-punks Joyce Collingwood didn’t start out the way you would expect. We didn’t start talking about the new material they’re recording — or about the departure of their singer — but about Molly Ringwald.

“I love Pretty in Pink,” said Gillian Callander, Joyce’s bubbly bassist. “I just love John Hughes movies, all of them.” Sitting cross-legged on their studio floor with a beer in hand, vocalist and guitarist Twitch Carreras nodded along, her cork-screw hair almost dwarfing the rest of her.

If Hughes had ever made a movie about a hardcore outfit, a band like Joyce Collingwood could have been the stars.

Despite their fast and furious sound, the musical equivalent of a slammed shot of Bacardi 151, the band members themselves aren’t quite as intimidating. They’re the types of girls who’d say, “Radical!” without a hint of irony, and probably high-five you at the same time.

“As individuals, we laugh a lot,” said Callander. “Everyone’s always like, ‘You play that music? But you’re so nice!’ It’s all fun. Nobody goes to a show and says, ‘I’m so angry now!’”

The band clearly doesn’t take themselves too seriously, but the same shouldn’t be said for their music career. 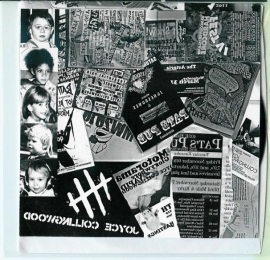 Along with Carreras and Callander, Joyce is fleshed out with Claudia Fernandez on guitar and Joy Mullen on the skins.

The band used to have a fifth head, a full-time singer, Private Minnou, whose affronted howls can be heard on 2011's self-titled LP. But creative differences led to an honourable discharge.

“The more we were like, ‘How can we push ourselves? How can we make this faster, harder?’ the more she was uncomfortable with it,” Carreras said. “And we really take being a musician as something you could do full-time and hopefully not starve to death. For her, that wasn’t her dream.”

“But we owe a lot to her. She was the one who said, ‘Where’s all the chick rockers? Let’s make a punk-rock band.’ Private Minnou got the troops ready and sent them off to battle — that was her job.”

However, Minnou’s leave meant that their debut album was immediately dated. As a band “gearing towards a jump,” as Callander put it, it’s imperative to have fresh material that represents who the band is right now, in hand.

They’re currently recording, with the goal to pop out a demo by the end of the summer. This time, the cut won’t be live off the floor. They’re building this new record piece by jagged piece.

“It’s much more relaxing this way. We don’t have to be wired for hours, eating cocoa beans in some studio!” said Carreras. “And I think it makes me a better guitar player — going in and getting each note down beautifully and really tight.”

Filling the void of a lost singer has put the pressure on those left standing. But Joyce has stepped up to the plate, Carreras doing most of the screaming, with Callander and Fernandez pitching in.

And vocals haven’t been the only challenge — in fact, the band has been challenging themselves deliberately. For the notoriously expeditious Joyce Collingwood (their self-titled’s shortest clocks in at 22 seconds), it’s a big deal when they say they’ve been experimenting with meatier song-lengths, as well as intros and outros.

“We do hear a lot of, ‘Man, I love what you’re doing, but as soon as I get stoked, it’s over,’” Carreras admitted. “Usually, I’d say, well if you like it so much just fucking listen to it again. But live, they don’t have that option.”

Are they nervous about fan reactions?

“No! Because we really believe in it,” laughed Callander. “We’re like, ‘Listen to this, this is so awesome!’ But you know, isn’t that the way all bands should be?” 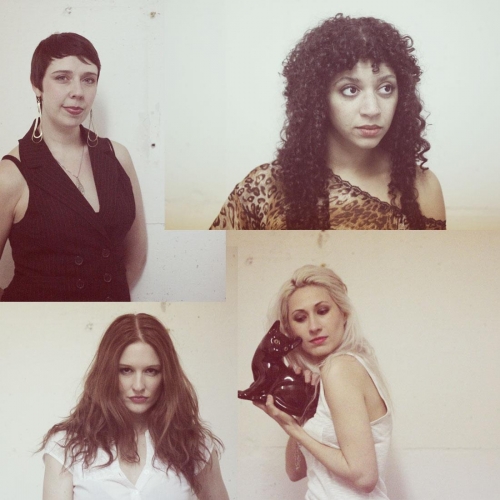 “I think that’s what people get out of it,” added Carreras. “We’re so stoked that they just get stoked.”

The dichotomy between their aggressive sonic personas and their sunny real-life dispositions came up again, when asked about their songwriting inspiration.

“Anger,” said Carreras, but with a Cheshire grin. “Betrayal. That’s a big theme. Any emotion that is tough to go through alone is much easier to get through in a song. It’s all poison, delicious poison.”

“And we put it out there,” said Callander, an equally puckish smile on her face. “To infect other people.”

The band’s self-titled debut can be streamed, downloaded or bought online. Keep your eyes peeled for the new album near the end of the year.

The 35th annual Folk Music Festival is not to be missed: here are some gorgeous scenes from the event, which ends on Sunday.
Jenny UechiJul 15th, 2012 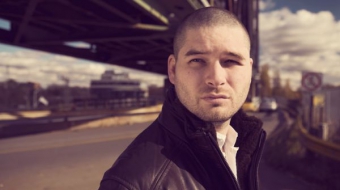