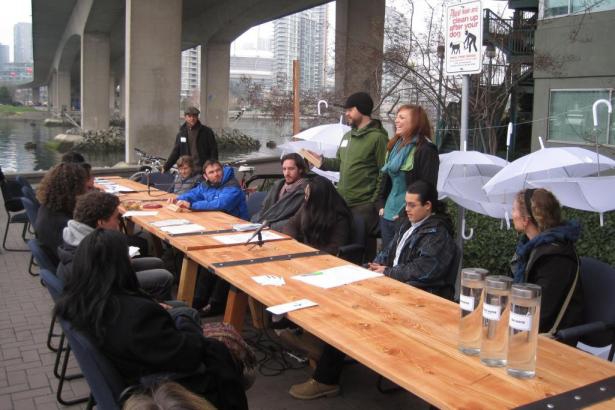 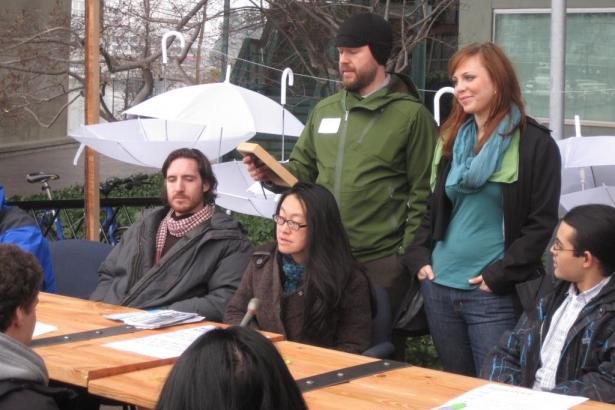 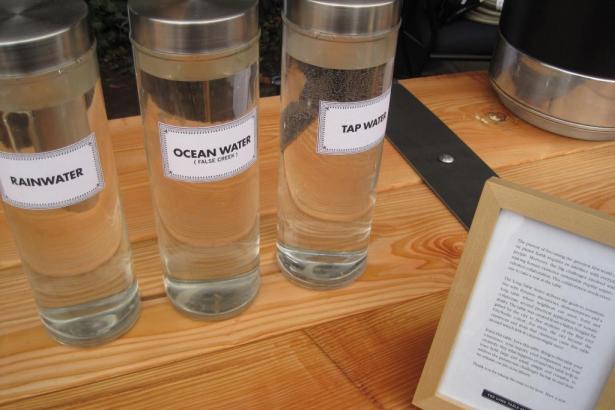 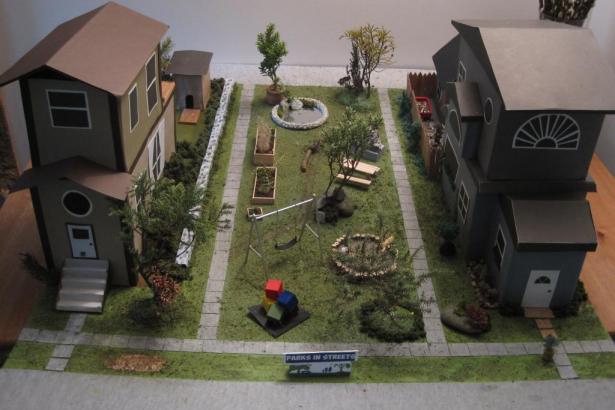 But that’s exactly what Vancouver aims to do with the groundbreaking CityStudio program, allowing selected students from all local post-secondary institutions to participate in an ongoing collaborative discussion about the city’s environmental goals.

During an open house Saturday afternoon at the group’s False Creek facility, participants introduced a handful of guests to the program and explained how it hopes to help Vancouver become the world’s greenest city by 2020.

Seated outside around the 10-metre Long Table – handmade by students in the program, using a fallen Douglas fir they got from the parks board – residents were invited to ask questions and share their thoughts.

“This Long Table can sort of be a symbol of community coming together to actually physically sit at the table and talk about the things that matter to them,” said Alexandria Mitchell, a University of BC political science student who helped design and build the wooden structure.

The idea was that the table would become a centerpiece that could be moved from event to event – a portable meeting place where like-minded citizens could gather to talk about everything from reducing emissions to accessing local produce.

“I was looking at it through the perspective of how civic policy translates to the community, and how the community buys into it and becomes a part of that policy, and how to do that effectively,” said Mitchell.

She explained that while Mayor Gregor Robertson's Greenest City goals are an important first step towards sustainability, they can be quite broad and difficult to interpret into tangible solutions at the community level.

Today’s open house marked the debut of CityStudio’s “Long Table Series” with a talk about water, offering visitors the chance to learn about local water sources, rain barrels and community initiatives to restore lost creeks. The topic seemed well-suited as the table’s first event, since as one guest put it, “You can’t have the green without the blue.”

The CityStudio program was born out of City Hall’s “Talk Green To Us” initiative, which asked citizens to weigh in with creative ideas on how to make Vancouver’s green dream a reality. Professors Duane Elverum of Emily Carr University and Janet Moore of SFU came up with the idea to engage students from various institutions and fields of study in a meaningful civic dialogue.

Before they knew it, their idea started gaining support and soon enough, the City was on board.

“No one’s ever done this before, that we know of,” says Elverum.

“It’s gotten way more interest than we thought. Somehow we stumbled upon this idea that everyone was thinking about at the same time, and everything just came together.”

Students from six different schools – UBC, Simon Fraser University, Emily Carr, BCIT, Langara and Vancouver Community College – applied for the first term of the CityStudio program. Of the 20 applicants, 14 were accepted for the core program, and Elverum says there are 400 other students involved through partner courses at participating institutions.

“We want people from all different areas,” he said, noting that the students come from a diverse range of academic backgrounds, from biology and environmental sciences to political science, arts and even communications.

“They had the desire, and we were there at the right time. So it’s very humbling.”

As part of the program, the city offered up a 4,000-square-foot space at Spyglass Place on the south side of False Creek, along with a coordinator and access to many of the experts and professionals on the Greenest City team.

Apart from the Long Table, other projects showcased during Saturday’s open house included a smartphone app to track local produce and a prototype for small neighbourhood parks in laneways or side streets. As this term’s group nears the end of their semester with CityStudio, some of the projects will be wrapped up while others, like the Long Table discussions, will continue over the coming months.

Kate Saunders, one of the students responsible for the “Parks in Streets” project, said that getting these ideas off the ground takes time and is often “not as easy as it seems”. But she’s hopeful that the next cohort of students starting in the new year will be able to pick up where the current CityStudio group leaves off.

Earlier this week, Mayor Gregor Robertson announced the launch of the Campus-City Collaborative (C3) as a way to connect students with professionals and other change-makers in Vancouver. CityStudio is just one of three student-based programs within the C3 initiative, created with the help of the Vancouver Economic Commission.

“C3 represents a unique way for our post‐secondary institutions and students to participate in tangible job growth, and is an innovative way of increasing Vancouver graduates’ job‐readiness for the growing green economy,” Robertson said in a media release.

Right now, landing a job or growing the economy may not be top priorities for the students still working on finishing their degrees. But for professors like Elverum, the projects they’ve started with CityStudio provide a great entry point to discussions about broader social, economic and environmental issues.

“The problems with sustainability are inter-related and they’re complex,” Elverum said.

“Everybody needs to be at the table. And if we’re actually looking at these sustainability problems and everyone isn’t at the table, then we’re missing an opportunity.”