Deputy City Manager Sadhu Johnston  said the Greenest City Action Plan is divided into three themes and is one of the most ambitious in the world. 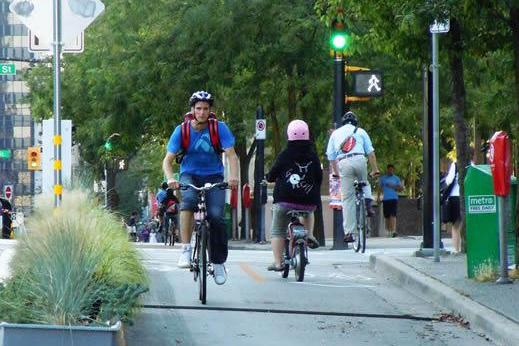 Vancouver city councillors vote this week on whether to approve the Greenest City Action Plan, a radical road map to becoming the "greenest city" in the world by 2020 presented to city council Tuesday.

"It's great to have an aspirational target like this with so many benefits that accrue to the city," said Mayor Gregor Robertson. "Ultimately we now have to implement them."

The city plan, a product of a year of work by the Greenest City Action Team, outlines 10 "greenest city goals" with accompanying targets, implementation measures, high priority actions for the next three years, longer term strategies leading out to 2020, and actions that are already under way.

The goals include measures in the areas of green economy and jobs, reduction of greenhouse gas emissions, clean air and drinking water, local food and reduction of solid waste.

"Throughout this plan we have focused on health, economic and equity issues," said deputy city manager Sadhu Johnston, who presented the report to council.

"We've really looked at this plan from a triple bottom line perspective," he said.

Johnston said the report is divided into three themes -- carbon, waste and ecosystems -- with some goals spanning all three themes and others contained to just one.

The "green economy" goal, which targets a doubling of green jobs in the city by 2020 over 2010 levels and double the number of companies that are greening their operations over 2011 levels, incorporates aspects of all three themes.

Non-Partisan Association councillor and mayoral hopeful Susan Anton took issue with the green jobs portion of that goal. Anton said the report does not include much discussion of "highly skilled, high quality jobs that are very important to our local economy." She said B.C.'s many forestry workers, citing her son, a tree planter, as one of them, are examples of these highly skilled workers.

Johnston responded by saying they used the United Nations definition of a green job in their analysis.

The report, a more than 160-page document that Coun. Geoff Meggs called "transformational," involved consultation with more than 35,000 people and over 130 academic, business and industry, non-profit and government organizations.

Each of the "greenest city goals" involved 10-35 of these organizations acting as External Advisory Committees.

Meggs questioned city staff on the possibility of achieving greenhouse gas emissions reduction targets, some of which are already mandated by the B.C. government.

Johnston said city infrastructure projects, like a new rapid transit system for the Broadway corridor, will be essential to meeting the green transport goals and the provincial government's requirements.

The "green transportation" goal's two targets for 2020 are to "make the majority of trips on foot, bicycle, and public transit," and to reduce the distance driven per resident by 20 per cent compared to 2007.

During the Olympics "we saw a huge transition of people getting out of their cars," Johnston said. "And many have said they will continue to do it if we could get a little bit more out there in terms of infrastructure."

One of the more brazen goals, the "zero waste" goal, targets a 50 per cent reduction in landfill-bound solid waste, compared to 2008.

But Councillor David Cadman, a Greenest City Action team member, questioned why there was nothing in the plan that focused on multi-tenant buildings.

"We talk here about zero waste, but we don’t emphasize getting recyclables out of multi-tenant buildings," he said.

"We've been scratching our heads on that one a bit," said city engineer Peter Judd, noting that they are exploring waste removal contracts that would allow the city to set perimeters requiring contractors to meet city standards.

Councilor Andrea Reimer, also part of the team responsible for the report, questioned its fate -- and all the work and consultation that went into it -- if council were to vote against it.

"If you don't approve," responded Johnston, "we'll have to rethink our strategy and go and come back."

Councillors will vote to adopt the report or not at Thursday's Standing Committee on Planning and Environment meeting.