The Director of Planning for the City of Vancouver, Gil Kelley, announced today the approval of a development permit to build 52 new temporary modular housing units at 4480 (formerly 4410) Kaslo Street, across from the 29th Avenue Sky Train station. The homes are part of a $66 million commitment from the Government of British Columbia towards building 600 new units of temporary modular housing to address the immediate needs of homeless residents in Vancouver.

The temporary modular housing building, which will contain 52 units, will be constructed by Horizon North. Each new home will be 320 square feet and contain a bathroom and kitchen. A total of 6 units will be fully wheelchair accessible. The building will also include a large amenity space with a commercial kitchen to encourage social interaction and provide a communal space for the residents to gather. There will also be laundry facilities, a staff room, an office, and meeting rooms for the staff and residents to use. It is anticipated construction will start in late March and the building will open in early July.

BC Housing has selected Atira as the non-profit housing operator to oversee tenanting and management of the building and to provide support services to the tenants 24/7, including life skills training, volunteer work, employment preparation and connections to community-based programs. Atira is an experienced supportive and low-income housing provider with more than 30 years of experience committed to providing supportive housing for sheltered and unsheltered homeless residents that nurtures belonging, influence and purpose.

Through the community engagement process nearly 11,000 notification postcards were distributed within a 5-block radius of 4480 Kaslo Streetbeginning on November 29th, 2017, along with 5,900 fact sheets.

In response, the City received approximately 200 comment cards and 80 emails from the public both in support and opposition.

Of the comments received, there was general concern about the scale of the building, the need to relocate and replace the existing community garden, proximity to nearby schools and playgrounds, and the tenanting process. Support was expressed for the City in taking the initiative to deliver this type of housing to help people experiencing homelessness.

In approving the development permit for the Kaslo temporary modular housing application, the Director of Planning acknowledged the community's feedback and set a number of conditions of approval to specifically address the concerns raised, with particular regard to how the new building will successfully function within the community. 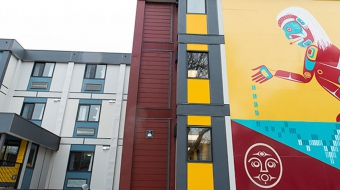 The City of Vancouver's Director of Planning has approved the development permit for the construction of temporary modular housing at 525 Powell Street (formerly 501 Powell St.). The...
Vancouver ObserverMar 6th, 2018
Speak up about this article on Facebook or Twitter. Do this by liking Vancouver Observer on Facebook or following us @Vanobserver on Twitter. We'd love to hear from you.