The little-yellow-school-house saga continues for the VSB, which is facing much bigger challenges. This little school house can be saved — it's been done before — but it will be up to a group of determined heritage advocates to make it work. 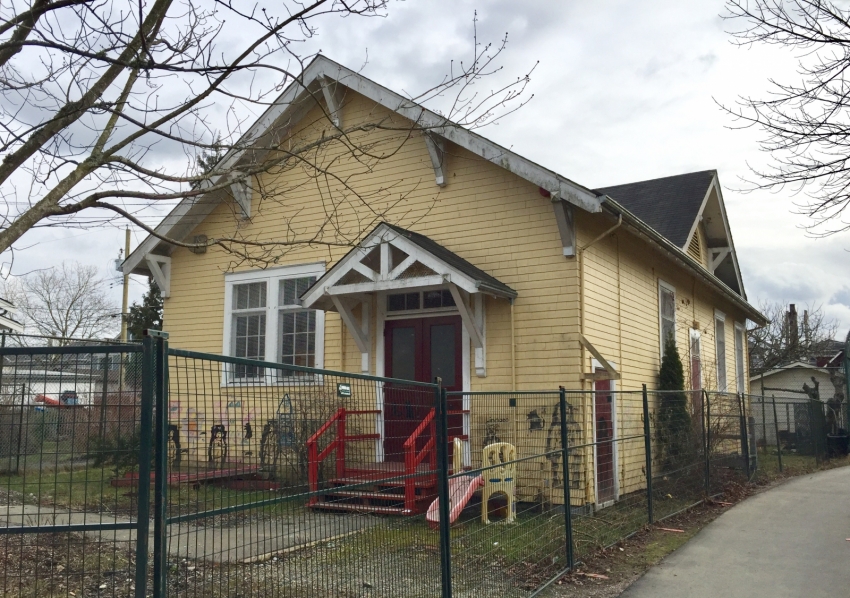 The little yellow schoolhouse on the General Gordon elementary school site is facing the wrecking ball unless a deal can be struck for someone to take on all the costs of retaining and operating it. Photo: Patti Bacchus

The Vancouver school board (VSB) has its share of big challenges: upgrading seismically high-risk schools, getting new ones built in parts of the city where schools are overflowing, figuring out how to balance underfunded operating budgets and much more. But it has little ones as well, including deciding what to do with a little yellow school house it doesn’t need or want.

Small, local issues like these may not seem like a big deal to most and in the larger scheme of things they aren’t. But they matter to some people and need to be handled thoughtfully, respectfully and creatively.

I had my sights set on bigger issues when I ran for school board three times, but I also knew being a locally elected official means paying attention to your constituents on issues both big and small.

Over the years, I spent hours reading up and hearing from people on topics like dogs on school fields, snow removal, security roll shutters for school windows and, well, you get the picture. They’re not big issues but they can blow up if they aren’t handled with care.

Which brings us to the long-running question of what to do with the little yellow school house that sits on the south-east corner of General Gordon Elementary School in Kitsilano.

I say long-running because discussions about the fate of the old General Gordon building started ten years ago.

At least that’s when I joined the conversation as a parent representative. The focus then was on dealing with the seismically high-risk main school and whether to tear it down or upgrade it.

There were passionate pleas on both sides. Several parents and local residents, notably the West Kits Residents' Association, wanted the old building preserved and upgraded, citing heritage value. School board staff and consultants, along with many parents, argued a replacement school would provide a better learning environment. I’m not doing any of the arguments justice here — they were complex and multi-faceted on both sides.

That went on for years until the VSB voted to tear down the main school and replace it with a state-of-the art new building (disclosure – as a trustee and board chair at the time, I voted in favour of that decision although I respected and appreciated the arguments for retention). It wasn’t what everyone wanted but I believe it was the right decision and the new building that opened last September is spectacular.

A small consolation for the retention advocates was that the little yellow school house would be kept. It was leased to a preschool and the plan was to move it to a different part of the site due to parking and lane-widening plans.

As the main-school project proceeded VSB staff found several costs were coming in higher than projected and they needed to find savings on the project. They told the board they could demolish the little building instead of moving it, to save money. The trustees balked at this, knowing it would add insult to injury to the many people who’d fought the demolition of the main school. They asked staff to try to find someone who could take the school and move it somewhere else, at their cost. At that was that — until last spring.

The new building was almost done and staff, students and parents were eager to get in for the start of school in September.  Staff told the board they’d never actually put out the request for proposals for someone to move the little building because they’d consulted with a company that moves buildings and determined it wasn’t a good candidate. They said it would need extensive hazardous material removal and would have to be cut into pieces to move it. Moving would require the removal of trees in the way.

Once again, trustees balked and directed staff to make a last-ditch attempt to find a user who could lease the building where it was and pay for all costs associated with preserving and operating it.