The B.C. budget has more money for education but there could still be more cuts coming to Vancouver classrooms as most of it will go to restoring teaching positions as a result of the BCTF's landmark court victory. 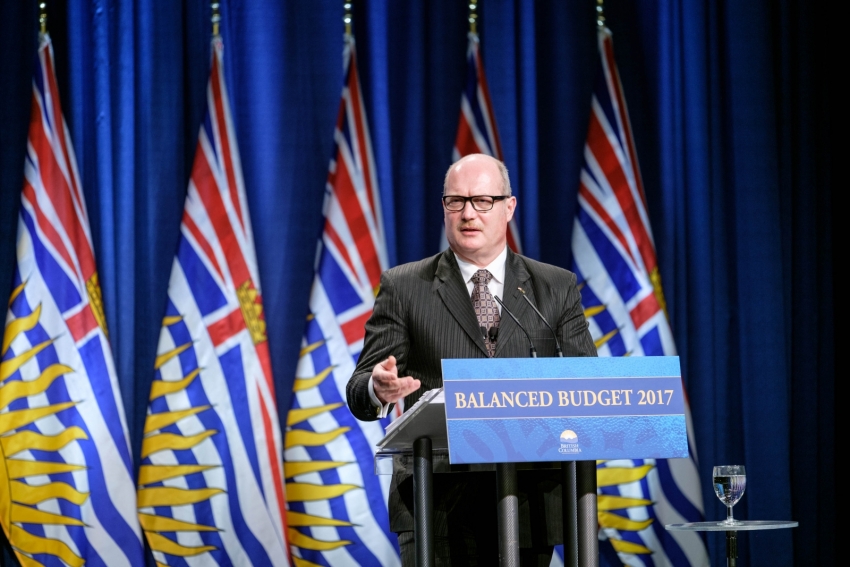 Mike DeJong announced increased funding for education funding in the B.C. budget but most of it will go to restoring teaching positions they have to put back following the BCTF's landmark court win last November. Photo: BC Government Flickr

Vancouver parents with kids in public school didn’t get much to celebrate with Tuesday’s B.C. budget announcement despite its increased education funding.

There isn’t much there for their kids classrooms beyond what the B.C. Teachers’ Federation (BCTF) won back in their court case and there could be even more cuts coming their way.

Government will announce its per-student funding grants in mid-March and that will tell school boards how much money they’ll get next school year.

School boards base their budgets on those numbers and they’ll be looking for money over and above what they’ll need to maintain services from this year and implement whatever the BCTF and government agree needs to be done to comply with the Supreme Court of Canada (SCC) decision. They may not find it.

They’ll find some relief and extra cash from the Medical Services Plan (MSP) reductions that kick in in January 2018, but I’m not seeing much else in the budget to address the Vancouver School Board’s (VSB) projected shortfall that the most recent estimates pegged at $15 million for next year. So instead of restoring services and staff that were cut over the past 15 years, there could be more cuts to come for non-teaching budget items.

It’s worth having a look at last spring’s VSB “restoration budget” that shows what’s been lost and what it would take to restore school staffing and service levels to where they were before the B.C. Liberals took over government.

It’s pretty staggering — it shows that a year ago it would have taken almost $80 million just for Vancouver to get back to those levels. If you add the over $20 million in cuts that were implemented this year, that totals over a $100 million a year to give VSB kids the same level of service that existed when my son started school 15 years ago.

In addition to hundreds of teaching positions cuts over the past 15 years — that will presumably be at least partly restored due to the BCTF SCC win — the VSB made deep cuts to administrative staff including seven-and-a-half vice principal positions and several district administrative staff positions. In 2004, 16 supervision aides (playground supervisors) were cut.

There’s also no relief in sight for the VSB’s adult education programs or money to address the many cuts to school building maintenance, furniture and equipment budgets or youth and family workers who support vulnerable and/or at-risk students.

I’m not holding my breath that the popular elementary band and strings programs that were cut last year — one of the many reasons the elected board refused to pass their budget, leading to our October firing — will be restored, but I hope they are.

It will be interesting to see how the VSB’s government-appointed trustee will deal with the shortfall and whether she’ll take education minister Mike Bernier up on his suggestion to sell all or part of Kingsgate Mall and use some of the proceeds for next year’s operating budget.

That would be a mistake — selling off your capital to fund operations is a shortsighted mug’s game with long-term costs, especially in the case of Kingsgate which brings annual lease revenue that can be used for programs and staffing.

Government spent years — and millions of dollars — in court trying to defend its 2002 stripping of the teachers’ contacts only to lose at the highest court in the land last November.

Now it’s run out of options for starving schools of much-needed teachers to provide good conditions for both teaching and learning. We can thank the justice system and the BCTF for that.

A big chunk of the restored education funding in this budget, which works out to about $283 million in operating funds for public schools next year and $25 million for private schools, will go to pay teachers government will be obligated to hire as a result of the SCC decision.

Another $45 million of the public school portion will go to pay for school busing over the next three years. That, along with more money for the rural schools fund, will likely be popular with rural parents who rely on school buses to get their kids to school but won’t help urban families.

There’s also funding for enrolment growth but again that won’t improve the bottom line for districts like Vancouver that are still seeing slight enrolment declines.

That tells me the Christy Clark Liberals are aiming to shore up rural and suburban support and are pretty much writing off Vancouver voters for the coming election. That’s not surprising after Clark’s humiliating 2013 loss of her Vancouver-Point Grey seat.

Expect Clark to continue stoking the rural-urban divide as she hits the campaign trail as we head into spring.

While it’s great news the courts are forcing this government to put money back in the system and restore at least some of the teaching positions they forced school boards to cut, this budget tells me they’re only doing what they have to do and buying some rural votes where they need them.

School boards will still be struggling to balance their budgets and face more tough decisions with too few dollars to address too many needs. Election day is May 9.