Critics and teachers quickly pointed out that government's February 19 announcement of less than $50 per student for classroom supplies won't go far enough to make up for years of cuts under the B.C. Liberal government. 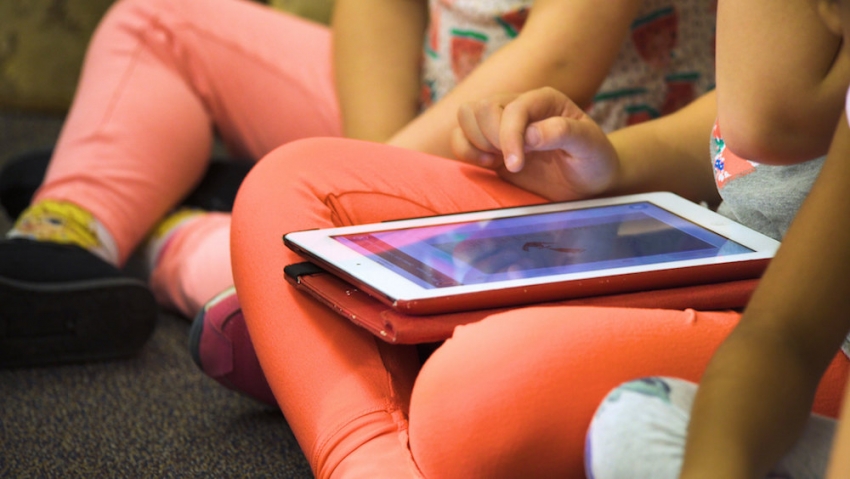 The government's announcement of $29.4 million for classroom supplies was accompanied by this photo of what appears to be students using an iPad — which would cost far, far more per student than what was announced. — Photo: BC Government Facebook page.

It says something about Christy Clark’s public education record when government thinks kids getting a new textbook (actually probably about half a textbook given today’s prices) is worthy of a news release. Because — sadly — it is. That’s how low this government has sunk when it comes to education funding.

Weary parents already pinched by high child care and housing costs are used to fundraising for what used to be considered basics: textbooks, art supplies, science equipment and library books. I bought kleenex and glues sticks for my kids’ classrooms and fundraised for a playground and library books. This is what prosperous B.C. looks like for public school parents.

Maybe the government communications folks knew crowing about funding for textbooks, art supplies and lab equipment was an overreach, which would explain the sheepish timing of the news release – 9 am on Sunday morning, not to mention the oddness of touting it as a “back-to-school boost” in the middle of February.

Sounds pretty great until you do the math. First off, $2 million of that will go to private schools, leaving $27.4 million for public schools. That works out to just under $50 per public school student. At the secondary level, that’s about $6.25 per student per course. A single textbook can cost over $100 so that’s a bit of a challenge.

And at the secondary level it’s not even enough for an English teacher to buy a set of novels for each class. It’s a drop in the bucket in terms of making up for what’s been carved away under too many years under the B.C. Liberals and their chronic education underfunding.

This will make for an interesting B.C. budget this week for those of us interested in education. The November Supreme Court of Canada decision means government has to cough up millions of dollars to restore thousands of teaching positions that were cut after it illegally stripped the teachers’ contracts in 2002.

That’s good but it may leave even less for many other areas that have suffered too — support workers, administrative staff, playground supervision, building maintenance, technology, books and other resources for school libraries and much more.

Which could explain why beleaguered education minister Mike Bernier came up with this unexpected and already-much-mocked announcement Sunday morning — he was tossing parents a bone hoping they won’t complain too much when they hear the details of the B.C. budget.

It’s clearly too little to make much difference and it won’t mean parents will be doing less fundraising, but every bit helps and it shows government is feeling the heat for its poor education funding record.

School boards that have already had to make deep cuts into their administrative staff at government’s direction will also be required to report back to the education ministry and parents about how they spent the money.

Something that irked me in my eight years as a school trustee was that when government finally loosened purse strings, they decided where the money should go and added reporting requirements — creating more work that doesn’t make anything better for students.

So kids, take really good care of that new textbook if you get one — you’re going to have to make it last awhile.