I Am a Gamer: Jamming to develop a video game with a strong female lead 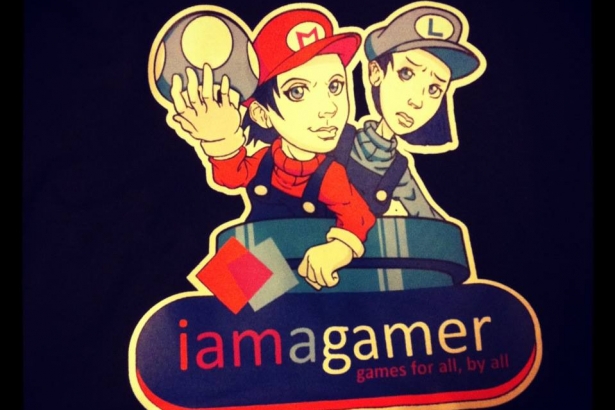 This is the t-shirt jammers received participating in iamgamer game jam, that happened at the Centre of Digital Media in Vancouver, July 12-14.

Who says you can’t have a female lead in your video game? Apparently your funders.

According to an online gaming article, Remember Me, a video game released last month, received criticism for having its story revolve around a woman because it was “going to feel awkward” (for the male gamer).

Attendees at the Iamgamer Game Jam on July 12-14 at the Centre of Digital Media in Vancouver, including my team and I, sought to challenge that assumption. In a 48 hour period, teams developed and presented playable games featuring female lead characters.

I worked on a game called 'HEX'. It is about a young alchemist/scientist, Oriana, who is accused of being a witch and is sacrificed by her village to a demon lord and is then saved by a real witch, Bellatrix. The two escape to a cave, where they have to work together and defeat the monster.

I met Emily at Feminist in Games' annual workshop at the Centre of Digital Media. I went to go see Anita Sarkeesian speak, along with other speakers. Sarkeesian started a Youtube show, Feminist Frequency, that analyzes representations of women in films and now video games, and has received threats and criticism for her videos

While I was there, I pointed out to Sarkeesian that I had been told not to go see her speak by even my female colleagues and gamer friends. I asked Sarkeesian what she thought of females who had helped participate in the online hate campaign against her. Sarkeesian in turn replied it was mostly band-wagon jumping on the girl's part to fit in the boys club of video games.

Emily contacted me a couple days later. She was interested in the question I asked Sarkeesian and I guess the personal stories of the criticism I got from my female colleagues. Emily also writes a feminist fashion blog, the Closet Feminist, which is a humorous and in-depth read for those looking for pop culture and fashion feminist analysis. My personal favorite is her "Slut-Shaming Revenge Fantasies" category which I want to be the concept of an action-packed, gritty, revenge mainstream film a la Django: Unchained now!

I later met her boyfriend, Phil, who is a game designer. Phil contacted me and asked me if I'd like to join him in the jam, because he was participating as well. He told me the game would be horror based and him and his friend, Matthew would come up with the concept.

Phil found an artist online who signed up for the jam. Her name was Laurel. After some friendly internet stalking, I found out she goes to Emily Carr University, which I attended as well.

The team was assembled.

During the first day of the jam, I watched people set up a huge sign for Power Up Audio at the staircase leading to the kitchen in the room. We were in this huge space called the "Hangar" in the Centre of Digital Media. The room is essentially the size of a hangar, with a garage door in the back.

I found Phil after picking up my lanyard and bottle of water. We threw ideas back and forth, after he was done chatting with another team. Nuba came in and catered our dinner. I was pretty excited, I am an on/off vegeterian, so I adore their baked cauliflower and other dishes. I took the quinoa salad they offered for us.

I opened my backpack and unpacked my survival gear. A can of Monster, Starbucks Energy Shot, and NOS. A blanket. A pillow. A change of clothes. My toothbrush, lotion, soap and comic books for inspiration. I brought my drawing tablet and laptop. I whipped out my DSLR. I glanced around and saw others whipping out pillows and survival gear.

Everyone was talking in the giant hanger room of the Centre of Digital Media, so the environment at first was quite loud. We decided to sit outside, in the last bit of sunshine we'd enjoy in the next 48 hours. We talked about where we wanted to go with the characters, the story and the design.

We established our roles: Phil would program, Matthew would design the levels, I would write the script and do some art assets and Laurel would do the lead art and animation.

I had to put down the fork and stop eating the quinoa deliciousness at Kimberly Voll’s opening speech for the jam. If you'd like to read it all, it's available here. She is the organizer of the event. If you'd like to hear her story of how she organized it, you can read an interview here.

Voll had a long speech, but these are the memorable parts for me:

Who am I to host this jam? I dunno. I’m just me. But I want to live in a world that is tolerant and open and celebrates the wonderful tapestry of life, woven of the richness and diversity of every one of us.

And I know I’m not alone.