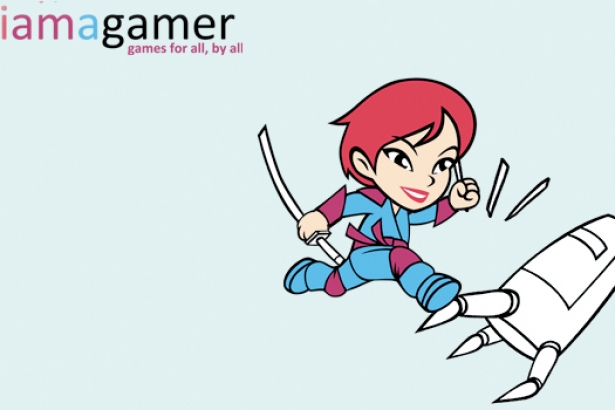 This weekend, iamagamer will be having a 48-hr game jam at the Centre of Digital Media in Vancouver. Independent game developers will join together and create games that feature that rarest of birds: strong female leads.

Gamer Kimberly Voll organized the event in response to Gamasutra's article, ''You can't have a female character in games", in which Jean-Max Morris (creative director on the adventure game Remember Me) discussed the "issues" with having a female protagonist in a game.

Voll, who was organizing the monthly game developer meetup, Full Indie, took that as a challenge to get more discussion going about strong female leads.

I had the opportunity to hear her perspectives and her experience about organizing this game jam.

Why did you create the "strong female lead" game jam?

For a long time, I've been conscious of issues of under-representation in video games and in other areas like software developer.  As developer, professor, and long-time gamer, I've spent a lot of time deal with some of these biases directly, or seeing my students deal with them.

It's not a surprise that the industry views the market the way that it does, but what shocked me was how directly it was stated in the article -- just as a matter of course with no attempt to soften it.  This shocked me as it pointed to a problem that was far more endemic than I expected - if large-scale publishers are simply stating these facts with no inclination of reform, then somewhere something has to start to change.

The jam itself came out of a tweet. After reading that Gamasutra article, I immediately tweeted 'You know what this spells?  WTF.', followed by 'Cooking up a new game jam this summer-theme is strong, female leads--any kind of game you want. Join me?'

The response I received was fantastic, and since then the support has only grown.  I never imagined the jam would get this big.

I want a better world that's not only tolerant, but celebrates diversity. However that's a pretty broad statement with a lot of subtle and complex issues all tucked away within. I realized that I needed to spend time really thinking about what a 'strong, female lead' character actually meant to me, which turned out to be a difficult question to address.

The more I thought about all of the various factors at play, the more I came to appreciate the complexity of my own relationship with gender and under-representation and bias.  And I was shocked to discovered the ways in which my thinking has been contributing to some of these issues. (I talk in more detail about this in my blog)."

Can you explain briefly how you and the sponsors came together?

When you do something like this dealing with such a hot issue, you put your neck out and you don't really know what awaits.  So to receive such support means the world.

I spent a lot of time talking to companies and asking if they would be able to sponsor.  The response was positive. Basically everyone was on board, though not everyone could provide monetary support.   In addition, from my tweet some of the amazing folks here in Vancouver started reaching out with their support,  particularly the indie community has been phenomenal.

A special shout-out goes to East Side Games and Silicon Sisters donated the web page, designing, creating and programming the entire site from scratch.  People are still reaching out with donations and sponsorships even as I write this, which is so wonderful.