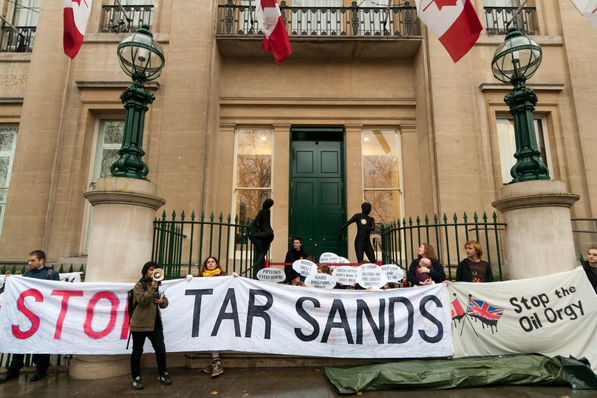 The Vancouver Observer has not been able to independently confirm this, but here's the complete story, according to the group:

The annual energy summit was hosted by Canadian High Commissioner Gordon Campbell and featured top officials from Shell, Total and Enbridge, along with Conservative Energy and Climate Minister John Hayes.

The aim of the event was to promote Canada's tar sands in Europe, and discussions included how to deal with 'public policy risks' such as impending European transport legislation which would discourage imports of highly-polluting fuels like tar sands into the EU market.

At 8.30am, half an hour before the event was due to start, 30 protesters rushed to the steps of Canada House and blocked the entrance with their bodies and a huge banner saying 'Stop tar sands'.

The Canadian Government has recently been exposed as mounting an unprecedented lobbying campaign to undermine the EU Fuel Quality Directive (FQD), which aims to reduce emissions from transport fuel by 6% by 2020, and would label tar sands-derived fuel as highly polluting. “The Canadian Government is working overtime to undermine climate policies in Europe so that they can barrel forward with unfettered tar sands expansion,” said Hannah McKinnon of Climate Action Network Canada. “There is no doubt that the tar sands are standing in the way of Canada’s climate promises, but they shouldn’t stand in the way of Europe’s as well.”

The UK Coalition Government has been documented as supporting these attempts by the Canadian Government and British oil giants BP and Shell to undermine the FQD.

“We are already seeing the impacts of climate change around the world, and want to see the kind of leadership the European Union is taking to reducing emissions from transport fuels. But the UK Government is cosying up to Canada to sabotage key climate legislation,” said Philippa de Boissière from People & Planet. “We need to see the UK Coalition Government take action on reducing emissions rather than staying tangled in their twisted love affair with big oil.”