Jodie Emery on Marc's GED, the Brown Recluse spider bite he received in a Georgia prison and his taking up bass guitar.  VO's interview with the woman who has become head of the high profile marijuana activists' Cannabis Culture empire. 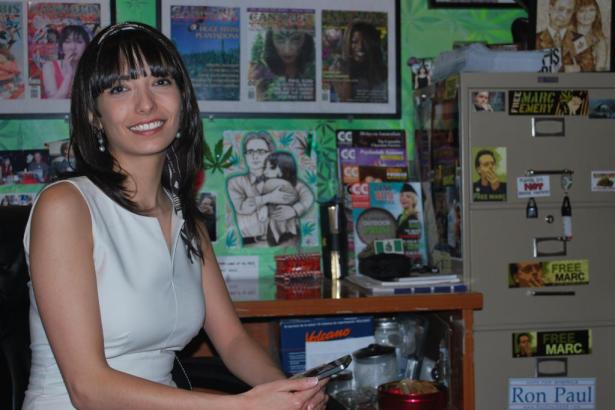 When Jodie Emery’s friends started smoking marijuana in grade school, she condemned them for it. “Anti-drug” is what she called herself then. It’s an obvious and ironic juxtaposition to her current position, wife to Canada’s most well-known marijuana activist, Cannabis Culture magazine publisher and political hopeful, Marc Emery.

Today, what once stood as a the Prince of Pot’s marijuana empire, now rests with Jodie. Last year Marc pleaded guilty to conspiring to manufacture marijuana, a charge relating to his business of selling cannabis seeds by mail, and was sentenced five years in prison.

Strapped with the burden of her husband's public life, Jodie’s learning how to negotiate her own aspirations while managing her husband and his many responsibilities.

It’s a topic I hope to explore in an interview with Jodie. Walking down West Hastings St. in Vancouver, my mind is racing, filled with questions I want answers to.  I’m a block away from the Cannabis Culture store, headquarters of Marc’s magazine of the same name. That’s where I’m supposed to meet Jodie, and I’m wondering what I’m in for. I’ve never been to the store before, but I imagine there will be floor to ceiling Bob Marley and Marc Emery merchandise, reggae music in the background, racks of clothing and walls of stickers, patches, pipes and jewelry all baring images typically associated with marijuana culture.

As if my imagination wasn’t thoroughly cliche-ridden already, I’m suddenly overwhelmed by a sweet, skunky scent of stale marijuana wafting down Hastings.

I pull open the door to find not only the source of the smell, but that my imagination was amusingly accurate.

As I walk through the office I see locally made Jewelry for sale with a labels like, "Not made in China," and pipes shaped as lipstick containers, presumably for easy concealment from one's parents or other disapproving figures of authority. Now I’ve really pinpointed the source of the smell -- weed smoke rises and fills the air surrounding two store employees, toking away whilst working.

A tall, thin blonde women directs me to the back of the store where I see Marc’s wife, Jodie chatting on the phone.

Off alone in her own corner of the office, Jodie sits immersed in a phone call seemingly disinterested and unaware of the activities that surround her.

I wait patiently by the partition that separates her office from the store. When she's off the phone, she makes a break for the door, barely noticing me. I chirp up and introduce myself, extending my hand in front of her. She daintily shakes it and says its nice to meet me, and then continues walking to the front of the store. She's apparently forgotten about our interview.

When she returns I re-introduce myself, this time being sure to tell her where I'm from and why I'm here. "Oh no, do we have an appointment?" she says. Once she realizes she's forgotten, she instantly turns apologetic, checking her iPhone and email account to determine how that could have happened. "I'm nothing without my calendar," she says.

"This is why we don't forget to sync our gadgets," quips one of those employees from behind a computer, through the pot smoke.

We all have a laugh over the confusion and then settle down to discuss life as Jodie Emery.

It was the politically charged discussions of 9/11 and it’s aftermath, she tells me, that absolved her grade-school friends of their transgressions -- smoking pot and drinking alcohol. It was then she realized smoking didn’t make you stupid, on the contrary, she says, “it seemed to make these people more enlightened and aware and open minded."

"They introduced me to Cannabis Culture magazine and Pot TV,” she says of her pot-smoking friends. “They were very politically aware, and when 9/11 happened they knew everything about Afghanistan and world governments and politics and geography and so much more than anyone else really did.”

It wasn’t long before that realization and moral one-eighty thrust her headfirst into a world of cannabis culture and politics, leading to a marriage with Marc in 2006, at the age of 21.

But that was then. Today he’s in a medium security prison in Mississippi and she’s holding down the fort in Vancouver.

"I'm taking care of Marc mostly,” she says. “It's a full time job, I mean having someone in prison is extremely draining with your emotions, your time, your money and just it's very difficult and that's a huge thing."

B.C. marijuana seed sales carry on, Marc Emery or not