With last week’s announcement that the Vancouver School Board’s superintendent is leaving, the preliminary work to find his replacement is already underway. 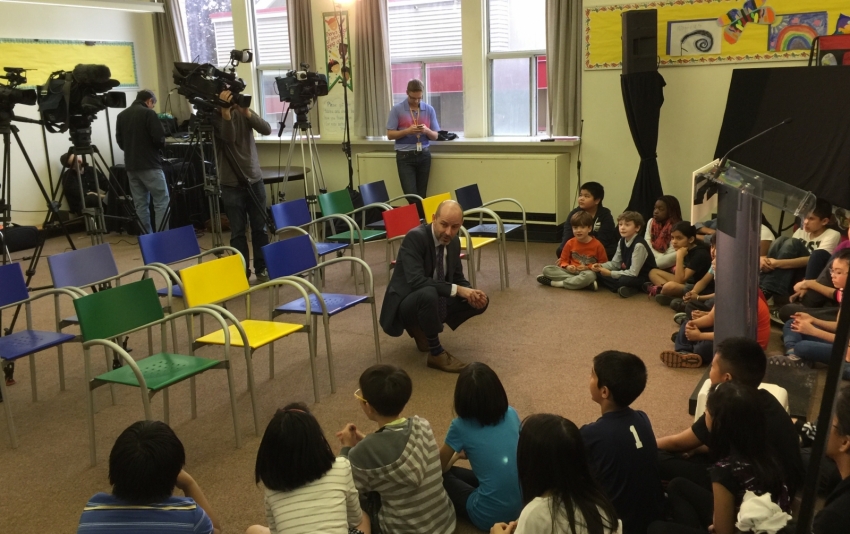 Scott Robinson — pictured here with students at Sir Sandford Fleming elementary last year at an event to announce funding for the school's seismic upgrade — was the VSB's superintendent of schools from March 2015 until last Friday. The VSB has started the process to find his replacement. Photo: Patti Bacchus

In B.C., superintendents are also their districts’ chief executive officers with the responsibility for directing, supervising and evaluating school district operations and carrying out the policies of the board, along with ensuring the district is in compliance with provincial legislation and collective agreements.

It’s a notoriously tough job and in B.C., probably nowhere more so than in Vancouver, where trustees are elected in an at-large electoral system that favours candidates aligned with civic political parties.

The VSB announced last week that Superintendent Scott Robinson was leaving at the end of the week after a tumultuous two years on the job.

We hired him to come and work at the VSB in 2012 as an Associate Superintendent and we promoted him to Superintendent in 2015. He was on medical leave from last fall until January and other staff have filled in for him at public meetings since September. His last day was June 9, after negotiating an undisclosed settlement with the VSB. He was paid a total of $284,615 for the 2015/16 school year, according to VSB financial documents.

For now, Robinson’s role will be filled by John Lewis, a retired North Vancouver superintendent who covered for Robinson last year while he was on medical leave. The big question is who will replace Robinson on a permanent basis?

A VSB spokesperson told me this week it’s hired a firm to begin the recruitment process but “as uncertainty remains at the provincial level regarding the outcome of the B.C. election and the future for the [the VSB], VSB expects to advance the superintendent search process in readiness for the final stages of the recruitment and selection process to be concluded by the [elected or appointed board]. Timelines for this process will be confirmed and adjusted, once the future for the [VSB] is clarified.”

Hiring a superintendent is a decision that can only legitimately be made by an elected school board, in my opinion.

In 2002, a Non-Partisan Association (NPA) majority-led VSB hired a new superintendent of schools — Colin McDougall — shortly before a new board was elected with a majority from the Coalition of Progressive Electors (COPE) party.

McDougall had a very brief tenure with the VSB and agreed to leave soon after the new board was sworn in. The COPE-led board hired Chris Kelly, who presumably had values and a management style the COPE trustees believed aligned with theirs better than McDougall’s did.

Those situations tend to be costly for the district as senior manager contracts generally ensure some kind of payout when a contract ends early. The McDougall case should serve as an important lesson. “Agreed to leave” often signals just that — an agreement of some kind was reached between the board and the superintendent, and that often involves a financial settlement.

When Robinson’s predecessor, Steve Cardwell, advised the VSB he would be leaving the board to take up a position at UBC (Cardwell neither requested nor received a VSB payout), we asked him to stay until after the 2014 trustee election so the newly elected board could choose his replacement.

Superintendents need and deserve the confidence of their boards. One hired by an outgoing board — or a government-appointed trustee — may find themselves at odds with a new board. This would put even the best superintendent in a difficult and unfair position if there is a shift in the political composition of the board, regardless of the superintendent’s professional political neutrality.

With Cardwell’s departure, we knew whomever we selected would have big shoes to fill and would need a steady hand on the rudder as the district continued through choppy seas. We had some impressive and well-qualified candidates, but ultimately ended up deciding the best candidate was right in our own office — Robinson.

The actual process included several interviews with stakeholder representatives, senior managers and the trustees. After considering the field of candidates, the board decided unanimously to offer Robinson the job.