The dress code debate seems to come around each year with the warm weather. What’s it really about? 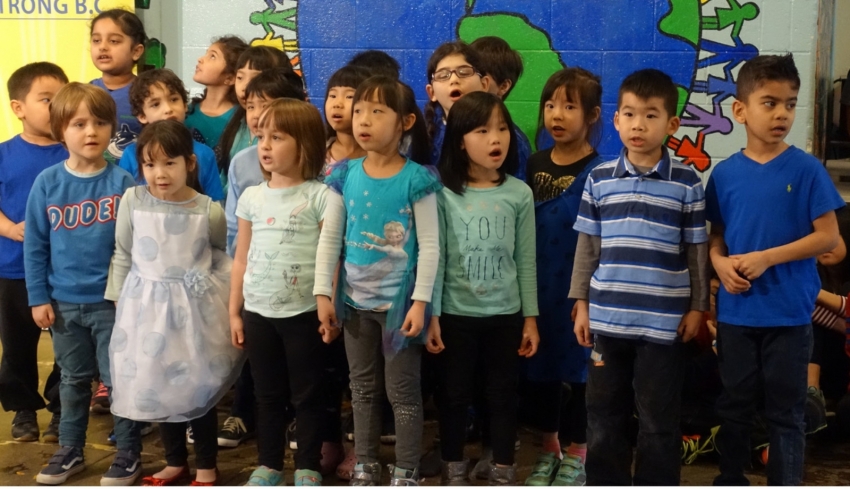 Students at Maple Grove elementary on Vancouver's West Side sing at a school event to celebrate plans for their school's seismic upgrade. Photo: Vancouver School Board flickr

The good weather is finally here and with it comes the debate about school dress codes.

Yup. Some people still think we need policies dictating what kids can and can’t wear to school.

The first parent advisory council (PAC) meeting I went to when my kids were little had an unusual item on the agenda — a parent wanted to talk about bringing in uniforms at our Vancouver public school.

The principal snuffed the idea out pretty quickly by explaining tactfully that it would be difficult to enforce in a public school and that he and the school staff had better things to do than police students’ compliance with new rules.

Made sense to me and most of the parents there. End of discussion — or so it seemed.

I thought about this a bit more when I wrote about a cellphone ban coming in at a Vancouver Island middle school next fall and when I read about a Vancouver private school for girls that was finally going to allow a pants option for the school uniform. In 2017.

I thought about the two years I went to Crofton House School in the early 1970s and the uniforms we wore then, which haven’t changed much over the years. I hated how scratchy the wool sweaters, blazers and skirts felt against my eczema-prone skin.

I remember being caught walking through the school entrance without my ivory-coloured wool beret (also itchy) and being docked two “house points” for the offence.

I remember how wonderful it felt to be able to wear what I wanted when I returned to public school for grade nine, although looking back I cringe at some of my fashion choices.

What does a phone ban have to do with uniforms and dress codes? For me it’s a question about how and why we make and impose rules that limit students’ personal freedoms.

Of course, we need some rules in schools — like we do in the rest of society. Rules keep students and staff safe and ensure behaviour doesn’t interfere with the rights of others to learn and go about their business in peace.

But just because it’s easy for school boards and administrators to make rules, doesn’t mean they should without thinking them through carefully.

This issue’s coming up in B.C. school district 61 (Greater Victoria) as they begin what school trustee Deborah Nohr described in a Facebook post as “a broad dialogue about a district dress code...basically an overarching statement to guide expectations and support diversity and inclusion.”

Nohr’s post attracted many comments ranging from those wanting school uniforms to others saying there shouldn’t be specific reference to clothing at all. It’s worth reading through the responses to her post to get a sense of the range of opinions.

If I was on that committee, the first question I’d be asking is what problem are we trying to solve?

I know folks have grumbled about young people’s clothing choices for pretty much ever, but is this really a pressing issue that needs codified rules? Some people think so, others, including me, do not.

There seem to be four main issues that concern the pro-code crowd. The first is clothing with inappropriate messages (profanity or promoting violence or substance abuse) or hateful slogans that make other students feel unsafe or harassed.

The second is clothing that is associated with gang culture — certain kinds of hats and clothing styles.

Third is an argument I’ve heard around the need to be “business” like, as if school was like going into a law firm every day.

And lastly there’s the “beach attire” concern that some types of clothing, primarily worn by girls — halter tops, off-the-shoulder tops, tank tops, short shorts etc.  — are too “distracting” for school and belong on a beach, not in a classroom.

Some of the arguments around this point to how “uncomfortable” it can be for male teachers and administrators to deal with this. Because, you know, girls shouldn’t make men uncomfortable. Or something along those lines.

At the Vancouver school board (VSB), where I served as board chair for six of the eight years I was an elected trustee, we settled on a district student code of conduct policy that expressed the board’s commitment to safe and inclusive schools that value diversity and defend human rights.