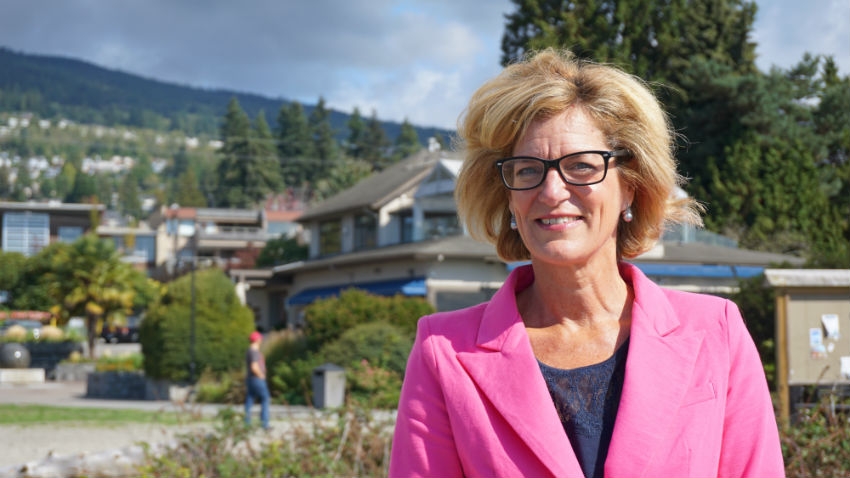 Since 1993, Pam Goldsmith-Jones has been a city councillor in North Vancouver, a district councillor in West Vancouver, and the mayor of West Vancouver. She retired in 2011 after 12 years in local government to pursue an executive MBA at SFU specializing in Aboriginal Business and Leadership in business, and open a public affairs consulting firm.

Most would argue that’s a good long run in municipal politics, but Goldsmith-Jones hasn't had her fill. In 2014, she tossed her hat in the ring as the Liberal candidate for West Vancouver-Sunshine Coast-Sea to Sky Country in Canada’s 2015 federal election.

“Honestly, I felt that I had an obligation to do it,” she says from her campaign office on Marine Drive. “I think the leadership of this country is going in the wrong direction.”

It’s been a dark decade for Canada under the Harper government, she explains, particularly with regards to environmental protection and upholding the sanctity of democracy. She points Canada’s infamous withdrawal from the Kyoto Accord, Harper’s habitual muzzling of scientists and the silencing of Chief Justice Beverley McLachlin as just a few examples.

It’s time for the Conservatives to be held accountable, she says, right down to the West Vancouver-Sunshine Coast-Sea to Sky Country riding.

“The expectation of Canada in the global community is that we are honest brokers, we are there to solve problems,” she explains. “We are very good at putting ourselves second which has earned us a lot of respect in the world, and Stephen Harper has diminished that significantly.”

It’s nothing personal, says Goldsmith-Jones, but this means incumbent Conservative MP John Weston must be called to account for the record of the Tory government. In a functional democracy, she says Ottawa should work in partnership with the provinces, ministers, and municipal leaders — a system that has been somewhat lost in Canada under Conservative rule.

“Those relationships have been severed by this particular style of leadership,” she explains. “I don’t think democracy is broken, but I think the ways we use what exists are not being used properly.”

Canada could afford to have more diverse and open committees, more empowered members of parliament, and more co-ordination between federal, provincial and local governments, she adds. If elected, these are precisely the kinds of strategies Goldsmith-Jones would vouch for.

“I’m running for open, honest and accountable government,” she says with confidence. “This particular government rewards narrow interests and that’s not good for Canada.”

During her 12 years as a municipal politician, Goldsmith-Jones has developed meaningful relationships not only with constituents in her riding, but with Indigenous communities and senior levels of government as well. She believes these connections give her an edge over the other candidates, and will allow her to hit the ground running as MP for West Vancouver-Sunshine Coast-Sea to Sky Country.

“You can’t get very far without partners,” she explains. “You have to do that at the local level because you have very little power, and I am I think, the most experienced in this particular race at doing that.”

Goldsmith-Jones is the first to admit that as a former councillor and mayor, she has won some battles, lost some battles, helped some people, and let others down. Her record speaks for itself however, and over the years she has presented before the United Nations on West Vancouver’s climate change plan, protested the destruction of the Eagleridge Bluffs, and spearheaded several go-green initiatives that led to West Vancouver’s UN Global Green City Award.

“Going through all of that does give you a kind of strength to know that you can do this,” Goldsmith-Jones explains. “And without that experience, there’s no way to fast-track that. You have to have gone through it.”

So why run for the Liberals as opposed to the NDP or the Greens?

Indeed, according to polling aggregator threehundredeight.com, if an election were held tomorrow, Goldsmith-Jones has a 77 per cent chance of unseating the incumbent MP in her riding. Despite these early indicators however, she will continue to door-knock and campaign until the ballots are cast on Oct. 19.

“People respect hard work, they respect the effort that candidates put into door-knocking and phone-calling,” she says with a smile. “That’s the opportunity, because it’s incumbent on me to make sure we understand one another and the communities we represent.”