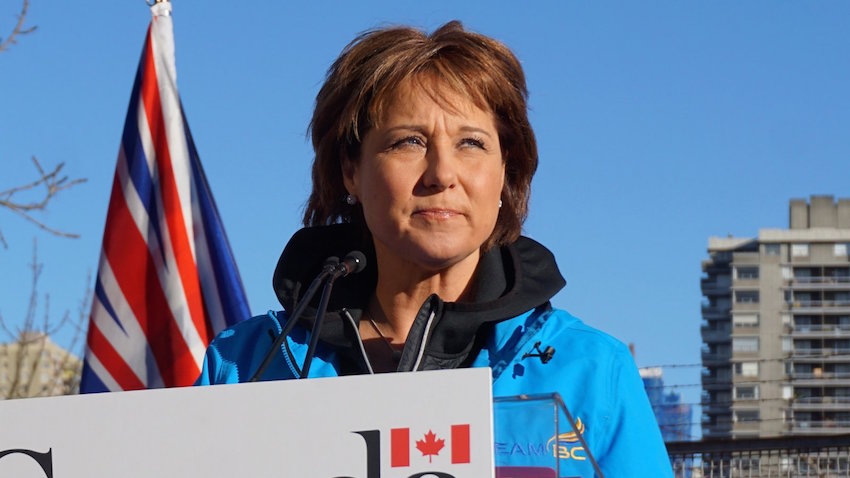 B.C. Premier Christy Clark has advocated for more federal support with oil spill response along the West Coast. She is seen here announcing the re-opening of the Kitsilano Coast Guard Station on Dec. 16, 2015 in Vancouver. Photo by Elizabeth McSheffrey.

B.C. Premier Christy Clark says the Kinder Morgan Trans Mountain pipeline expansion is "very close" to meeting the five environmental, financial, and legal conditions she needs to endorse the new pipeline. But she wants to ensure her province secures some benefits that outweigh risks that have prompted fierce opposition on the West Coast.

Federal approval of the controversial project, which would send up to 890,000 barrels of crude oil per day from Alberta to ports and refineries on the west coast, was announced Tuesday by Prime Minister Justin Trudeau. More than a dozen municipalities and First Nations have formally opposed the project and several hundred staged a rally against the pipeline soon after Trudeau's green light.

"We bear in British Columbia the bulk of the risk for this, so we want to make sure we get a fair benefit from it," Clark told reporters at a press conference Wednesday. “What British Columbians expect is that their premier is going to stand up, fight to protect their province, and find the balance between economy and jobs."

A provincial environmental assessment of the Trans Mountain expansion is still underway, and Clark said the federal government — along with Texas-based Kinder Morgan — must still work through a number of provincial approval details. Ottawa has met three of five conditions laid out so far, she explained.

To receive the green light in B.C., she explained, the proponent must demonstrate that it has "world-leading" marine and land oil spill response, prevention and recovery systems; has addressed Aboriginal treaty rights; and is providing ample opportunity for First Nations to benefit from the project. British Columbians must also receive a fair share of the fiscal and economic benefits, reflecting the level, degree and nature of the risk assumed by the province, she added.

The province initially rejected the Trans Mountain expansion project in January when it appeared the proponent could not meet all five conditions, but the pipeline has remained incredibly polarizing ever since. It threatens to increase tanker traffic in local waters by 600 per cent, critically endanger the Southern resident orca population, and compromise vital cultural and economic resources for First Nations and nearby communities.

Clark not worried about election consequences

If conditions are met, Clark's stamp of approval could cost her party votes in the May provincial election in major urban centres that have opposed the pipeline, including Vancouver, Burnaby, North Vancouver, Port Moody, Victoria, Surrey, Langley, and Abbotsford. At the press conference, however, Clark said that she wasn't too worried about the political impact of her government's decision.

The B.C. Green Party has firmly rejected the project, and New Democrat John Horgan, the official opposition leader, has said that the "risky proposal is not in B.C.'s best interests."

"I think when people decide who they want to support politically, I think they do it based on whether or not those people have clear and consistent principles," Clark explained. "I have not changed my position for even one day that these projects can 'get to yes' if they meet those (five) conditions. We are going to hold to that."