One week left to weigh in on B.C. government's plan for Great Bear Rainforest

The public is invited to comment on the province's plans for mining and tourism areas and revised land uses. 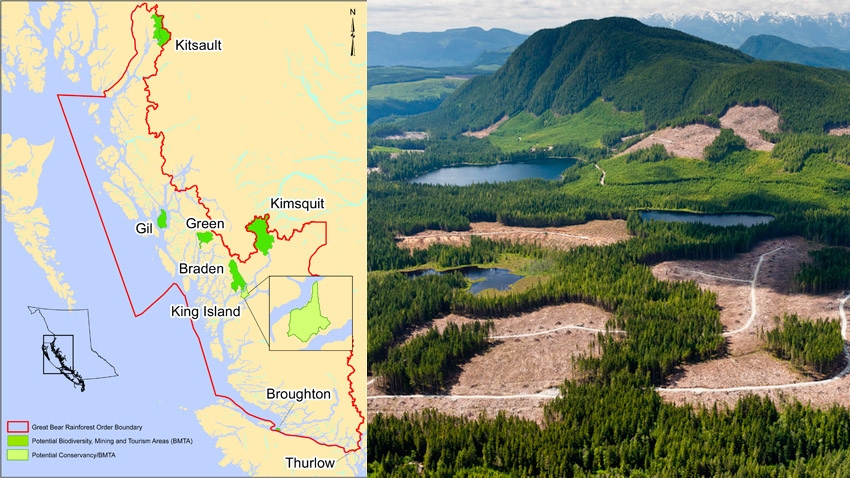 The public review and comment period on the B.C. government's proposed land use changes in the Great Bear Rainforest closes next Monday, Aug. 10.

Comments are sought on the potential for new biodiversity, mining and tourism areas (BMTAs) and a conservancy and revised land use objectives.

The intent of the proposed Great Bear Rainforest land use order and potential BMTAs and conservancy is to meet the goals of reserving 70 per cent of historic old-growth forests (with minor exceptions), while maintaining a viable forest industry in the Great Bear Rainforest.

Up to eight new BMTAs that collectively cover 295,000 hectares of Crown land next to existing conservancies and other protected areas in the region are also being considered.

The potential BMTAs being considered are Hanson, Sonora, King and Gil Islands, and the Kitsault, Kimsquit, Green and Braden areas. However, for King Island, the ministry is considering establishing a conservancy instead of a BMTA.

Commercial forestry and hydro-electric generation linked to the power grid are prohibited in BMTAs. Areas designated as conservancies explicitly recognize the importance of the area to First Nations for social, ceremonial and cultural uses. Copies of the proposed Great Bear Rainforest land use order, associated maps and maps of the potential BMTAs/conservancy and supporting data are available online. Written comments can be sent via mail to: Great Bear Rainforest Land User Order/BMTAs Ministry of Forests, Lands and Natural Resource Operations 142 - 2080 Labieux Rd. Nanaimo, B.C. V9T 6J9 Or via fax to 250 751-7081 or via email to: [email protected].