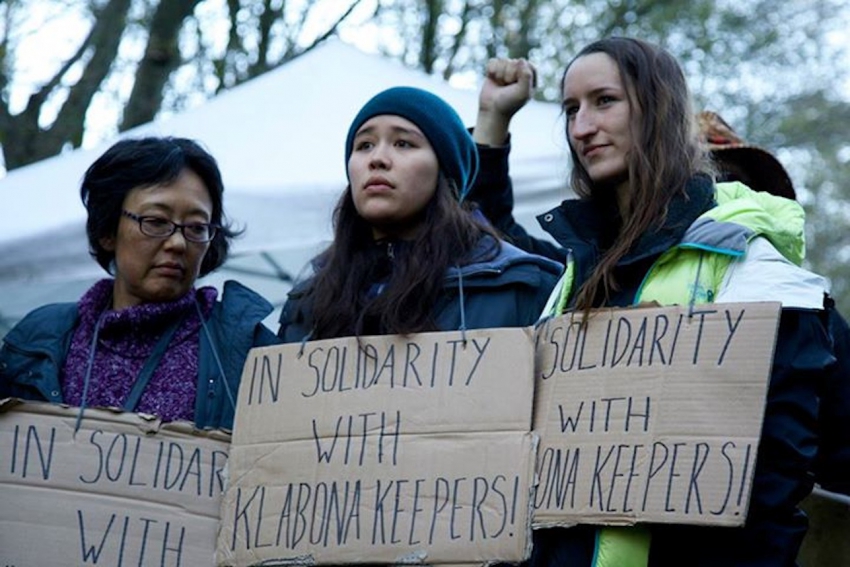 The women were promptly arrested, along with women from the Klabona Keepers of the Tahltan Nation in northern B.C., and two women with the activist group Beyond Boarding.

The women were among three mother-daughter groups detained by police on Burnaby Mountain on the weekend, including award-winning author Shaena Lambert, her daughter Lucy, and another woman and her 11-year old daughter.

Speaking to the crowd gathered on the mountain, the group of women said they would get arrested to oppose the controversial Trans Mountain pipeline expansion, which would bring 890,000 barrels of bitumen per day from Alberta to Burnaby.

“That line there that the police have put up is arbitrary, ” said Desiree Wallace of Beyond Boarding before crossing the line. “We’re going to be singing the Women’s warrior song, and we’re going to be crossing that line, and we do it with no shame.”

The women and other protesters were detained for violating the court order prohibiting protesters from interfering with Kinder Morgan’s survey work for a new pipeline route through the conservation area. Since then, they have all been released, according to Burnaby Mountain Updates’ Facebook page.

The Keepers have also been dealing with another battle, fighting large scale industrial development in their traditional territory for many years. Imperial Metals and the Tahltan Central Council will take the Klabona Keepers to court tomorrow for a long term injunction that may keep the Keepers from blocking the Red Chris mine, a project that threatens the Sacred Headwaters watershed.