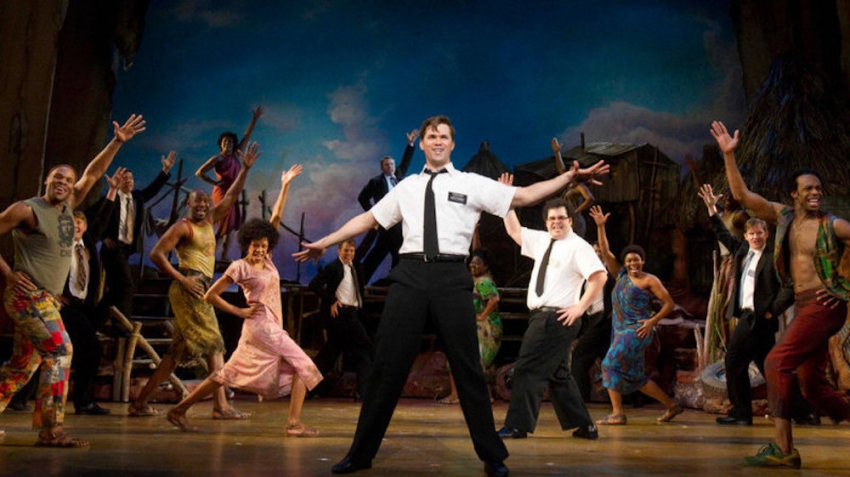 Launching a brand new Holy Book is a bit like making sausage: toss in some juicy narrative tidbits, ferment the whole melange awhile for that enticing "tang" of antiquity, pack it all in a shiny, colourful casing and season to taste.

“To taste,” if you're a Utah Mormon, likely means a bland mixture of Old Hickory and mesquite, with perhaps a maple sugar glaze and a dash of all-American ketchup. If you're a sub-Saharan villager trapped in the war-torn, famine-wracked, AIDS-riven dystopia of rural East Africa, your taste might run to something darker and more piquant – sweet/sour, maybe, with bitter overtones and lots of “bite.”

Such taste mismatches drive the wacky irreverence of The Book of Mormon, the madcap farrago playing the QE Theatre this week in a Broadway Across Canada  touring production.

Writing a musical comedy is just, after all, just another sort of sausage-making. The show’s co-creators Trey Parker, Robert Lopez and Matt Stone – the trio behind the long-running TV serial South Park – have their own special recipe: broad slapstick, all-around blasphemy and political incorrectness, garnished with micro-doses of moral theology and some buddy movie sentimentality. Spice liberally with F-bombs and toilet jokes, all encased in a preposterously gimmicky plot.

The vaudevillian schtik of the story is a couple of barely post-pubescent “Elders” (Kevin Clay and Conner Pierson) abruptly plucked out of the amniotic comfort of Salt Lake City and dispatched as missionaries into the hellscape of the Ugandan outback.

Working as a pair, as dictated by Latter Day Saints’ (LDS) rulebook, they set out to acquaint their new flock with the life-transforming Good News of Christ's post-crucifixion adventures in pre-Columbian America, as detailed in a set of (now-lost) golden plates excavated and deciphered by the denomination's founding patriarch in upstate New York.

Oughta be a cinch, right? After all, the Mormon credo is hardly any more improbable than such locally held Ugandan tenets as the curability of AIDS through sex with a virgin, the sanctity of clitorectomy or the incontestable sway of the local warlord (Corey Jones).

No wonder the other LDS Elders in the village have yet to score a single baptism. But any anxieties on that account can be simply repressed with the traditional Mormon nostrum for any negativity:  Just Turn It Off like a light switch, the Elders advise in a spirited soft-shoe number.

The African villagers, for their part, have their own talisman for life’s myriad bummers. It’s a spunky Afro-pop refrain, hasa diga eebowai, which briefly bucks-up the newbie Elders until they learn its English translation: “Fuck you, God.”

Clay’s character, the vainglorious straight-arrow Elder Price, sees no way to exercise his God-given talents in such a dismal milieu. He bolts off to seek reassignment to a mission field where he can really make a difference – Orlando, Florida.

That leaves Pierson’s character, Elder Arnold Cunningham, high and dry. He’s a needy geek, far more steeped in Star Wars trivia than in Mormon chapter-and-verse. But, as a lifelong outcast loner, he desperately longs for a buddy. So he’s thrilled to be paired with the charismatic Price and bereft at his abandonment.

Launching out in pursuit of his runaway mission partner, Arnold instead runs into the local ingénue (Kayla Pecchioni), the one villager naïve enough to entertain the prospect of LDS conversion as a potential ticket out of Uganda and into the unimaginable bliss of Salt Lake City. He winds up baptizing her in a tenderly clumsy pas de deux that feels more like a virginal deflowering than a church ritual.

That opens the floodgates for mass conversion of the villagers. The religious revival is helped along by Cunningham’s spur-of-the-moment doctrinal improvisations. He’s inspired as much by Yoda as by the Angel Moroni and – more than either of them – by his own compassionate empathy for even the neediest losers.

For one golden moment, this hard-pressed Ugandan backwater shines as the mission field’s top performer. All goes well until the Mission President arrives to commend the Elders.

The villagers decide to regale him with an impromptu, Uganda style staging of Mormonism, as they’ve come to know and love it. The skit dwells on such doctrinal niceties as curing AIDS by fucking frogs, rather than virgin infants. There’s also a poignant scene where founding patriarch Joseph Smith dies of the shits, handing over the reins of leadership before he can reach the Promised Land.

The scandalized President orders his Elders back to Salt Lake in disgrace. But they decide, instead, to stay with their reenergized flock in Uganda. And presently we find the villagers proselytising in their own right for a new flavour of sausage with its own life-changing tome – The Book of Arnold.

Sets, lighting, costumes and music were all as slick as we’ve come to expect from a Broadway Across Canada roadshow. But none of this polish was allowed to upstage the wonderful performances all around by the young touring cast.

Pecchioni, for all her winsome charm, projects an underlying strength to break out of her no-win bind. Clay is so priggishly self-assured it’s almost endearingly innocent. Leading the pack of Elders in their soft-shoe paroxysms of  denial, Andy Huntington Jones fairly crackles with repressed energy. And Corey Jones infuses the warlord with all the baritone gravitas of his Shakespearean training.

But the undisputed show stealer is Pierson, who bumbles through his dark night of the soul with a plashy grace at once wildly comic and touchingly vulnerable. He seems made for the role (and vice versa), but we look forward to seeing him again in other guises.