"Tales of an Urban Indian" hijacks Translink bus for a bumpy, lurching ride 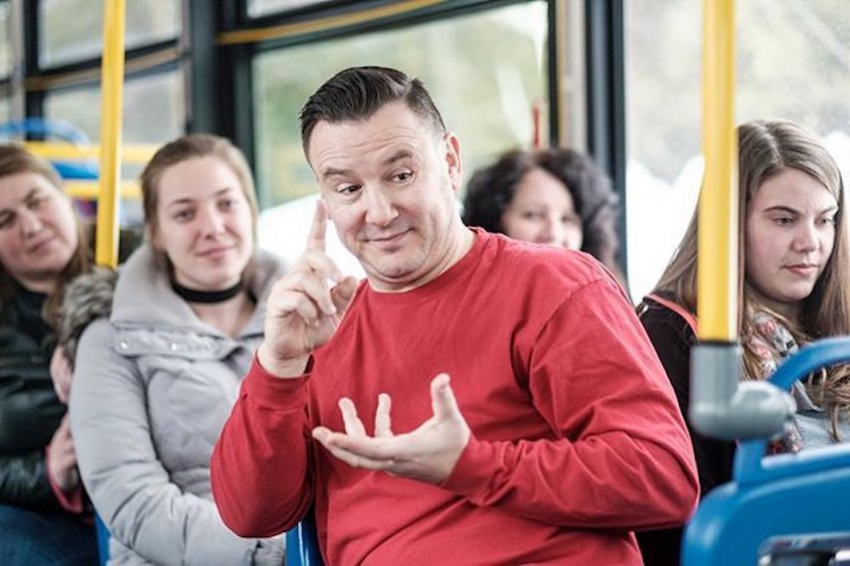 So I take a bus and a ferry and another bus to North Van’s Presentation House Theatre, there to catch yet another bus for a restaging of Darrell Dennis’ rouge et noir soliloquy “Tales of an Urban Indian.”

Our bus pulls up – a 1964 vintage relic from the Translink stable, now relegated mostly to the annual Yuletide “Rudolph Run” – and Ojibwa monologist Craig Lauzon launches into his manic spiel. Next thing I know, I’m back across the Inlet and careening right through my own home turf, the Downtown East Side.

Who needs a cross-harbour commute to experience this: some strap-hanging aboriginal stranger, by turns garrulous or umbrageous, leaning into my face with his life story on a jouncing Hastings Street bus?

I mean, where I live, I get that more days than not. Often, admittedly, the saga’s so engaging that I’ve been known to far overshoot my stop just to hear out the yarn.

But never have I heard an Urban Indian tale as mesmerizing as Lauzon channelling his buddy Dennis, whose two-hour script in turn channels everyone from his long-suffering Grandma back on the Rez to his white Earthshoe/vegan step-Dad down in Vancouver to his wheezy theatrical agent to his patronizing prospective in-laws to his drug-dealing DTES mentors to his clueless guidance counsellor to God Almighty (speaks in a Yiddish accent, wouldn’t you know).

These personae are no more than stock characters – pretty broad ones, too. But director Herbie Barnes and solo star Lauzon (of Royal Canadian Air Farce fame) both have the comedic chops to elide over the broad-brush portraiture with impeccable pacing.

And playwright Dennis, who first incarnated the protagonist, Simon Douglas, in the 2002 premiere of his quasi-autobiographic script, enfolds all the caricatures into a redemptive story-arc that somehow softens the stereotypes.

We follow Douglas from his single-Mom upbringing on interior B.C.’s Shuswap reservation through a series of moves down to Vancouver and back to the Rez, each time facing new dilemmas of adjustment, adaptation or (swear word alert!) assimilation.

He becomes fluently bi-lingual in both ditzy white kids’ teen talk and the growly, elliptical Rez dialect of English. He joins other Rez kids in taunting a couple of “two-spirited” (i.e. gay) playmates into suicide. Another childhood friend chokes to death in a drunken stupor. A pair of Hastings Street buddies get murdered in a drug heist. Grandma dies, apparently of a broken heart.

Every time a character in the monologue dies, Douglas produces their votive portrait out of his backpack and mounts it on the back-lit ad strip of the bus, while the driver pulls over to the kerb and opens the empty exit door for a solemn few seconds before jouncing on to the next stop.

But, in between stops, Douglas has his triumphs, too. For awhile, during pop culture’s “Red Renaissance” of the 1990’s (think Buffy Saint-Marie, Russell Means, Dances with Wolves) he manages to land bit parts in epic movies. He gets to tell off an ROTC classmate who boasts of a Canadian Army stand-off against Mohawk warriors protesting a Quebec golf course’s desecration of tribal burial grounds. He even solemnly assures his high school teacher (in Rez dialect, of course) that “my Spirit Animal ate my homework.”

Best of all, he woos and almost wins the Girl of his Dreams, a poised and accomplished Indian woman who is his case officer at the Welfare Office. After a touch-and-go courtship, she’s ready to throw in her lot with him on the condition that he give up drinking.

He blows it – his rock bottom moment. But then he re-enrols in Native Rehab and makes it through the whole six-week ordeal. At which point, the bus pulls up again to Presentation House and he backs out the door before we even have a chance to give him his abundantly well-earned ovation.