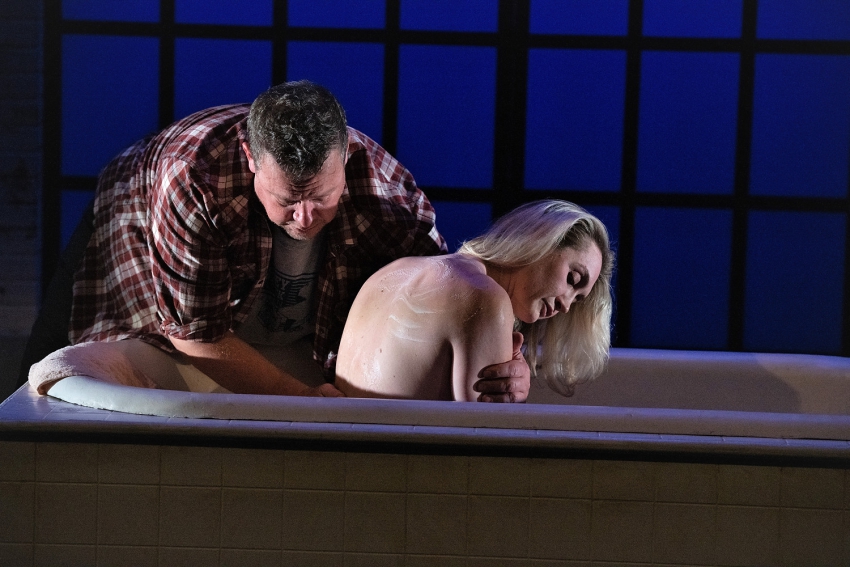 “If it ain’t broke, don’t fix it” sounds like simple common sense. But wiser sages, from AA’s Dr. Bob to the Zen masters of kintsugi, have long understood that a shattering breakage opens the way for a deeply redemptive “fix.”

Then there’s Jess (Bahareh Yaraghi), a stringy, brainy, Puerto Rican barmaid (shades of pre-Congressional AOC), who’s so broke that she has to hold down three jobs at once.

But the first broken character we meet is long-haul trucker Eddie (Ashley Wright), a recovering drunk who falls intermittently off the wagon. He’s now out of work again, after his latest DUI. And his wife of 21 years has just died. He’s so broke up about it that he’s planted himself on a barstool (behind a glass of seltzer, he wants you to know) and, staring out straight into the audience, he’s buttonholed a sympathetic listener – you – to soliloquize his sorrows.

Stunning performances, all around: fully realized, human portrayals with none of the mawkish pluck-and-pathos sentimentality of a charity telethon. Besides her brilliant casting, Arts Club’s artistic director Ashlie Corcoran, who directed Cost of Living, stuns us with her masterful pacing of this Canadian premiere production. We get so caught up in Eddie’s persona that we hardly register how many tantalizing plot hints Majok has crammed into just the opening scene.

But then, before we can even begin to digest it all, we’re spun off into a whole other story line. And, again, “spun” here is meant literally. Set designer Drew Facey has created a kind of cuckoo clock layout, with two doors set into opposite ends of a blank brick wall, so as to make maximum use of the BMO Theatre’s revolving stage for seamless scene changes.

So Eddie and his bar table spin off, stage left, and out spins a potted plant, denoting a posh studio apartment. Enter Jess, tentatively, unsure what to do in the empty room until a toilet flush is heard and the professor rolls in on his wheelchair.

It’s a job interview; she’s applying for a caretaker/nurse/housemaid position. Both sides are naturally cagey, given the intimacy and intrinsic interdependence of the work. His Ivy League snobbery is involuntarily accentuated by the nasal wheeziness of his palsy-associated dysarthria; she’s prickly and suspicious. But she needs the cash and he needs the care, so they strike a wary bargain.

Another spin of the revolving stage and we rejoin Eddie. Now he’s withering under the basilisk stare of Ani, his estranged, embittered wife (Teal Sherer). She’s another wheelchair case, quadriplegic after a car crash nearly a year ago, when she was driving off in a frenzy after discovering her husband’s adultery.

Now he’s come back to collect some left-behind belongings as “that woman” impatiently toots from a waiting car outside. But Eddie’s not ready to leave just yet. He’s read on the Web about the therapeutic value of colour and music for depressives. Full of clumsy solicitude, he urges Ani to brighten up her space and play some tunes.

He even cues up some hip-hop on his cellphone and essays a few half-assed disco moves. She skewers him with a glance and tartly observes “you still can’t dance.” He rejoins “look who’s talking.” A moment of exquisite discomfort and then, against all odds, both burst out laughing.

Spin the stage again. Shower time for Professor John. By now, having worked out their routines, Jess is all business, readying soap and washcloth. But John thinks it’s time they got onto a more personal – or at least collegial – footing. After all, she handles him naked every day, but he knows next to nothing of even her most basic backstory.

Wanting no part of any such intimacy, she reaches brusquely to bathe him; he spasms into an involuntary rictus, a corollary of his CP syndrome. Freaked out, she relents and starts to recount the saga of her ailing mother back in Puerto Rico, which is why she had to quit college, overwork herself on multiple jobs and sleep in her car.

Spin again. John’s pleading with Ani to let him take on her home nursing gig after her regular caregiver has stood her up once too often. “There’s too much between you and me,” Ani protests. What she values most about the agency-provided nurse is precisely her bland impersonality. She won’t let John care-take his guilt away. Her condition is not his fault, she snaps, and beyond his power to help.

Spin. Jess and John are now on affable – even chatty – terms, and she ventures to hope for still more when he asks her to set aside a Friday night for him (foregoing her peak-earning time in her barmaid gig).

Spin again; another bath scene. John’s sponging Ani in a tub. It feels “nice,” she has to admit, “…if only we’d done this before…” He’s even gotten her to put on some music. Not disco, anymore, but Claire de Lune, which he tenderly performs with Air Pianistic virtuosity on her inert arm.

Spin. Braving an oncoming snowstorm, Jess shows up for her Friday date with a pair of high heels an a bottle of wine in her tote-bag. Things do not go as planned (no spoiler details here). Spin again. The two story lines come together (again no spoilers) in a scene that we now realize falls chronologically right behind the opening monologue and well after the rest of the play’s action.

We’re left to hope that, for all their hurt and suspicions, these “broken” protagonists might find their way, after all, to some kind of humane “fix.” That could be magical thinking, which is defined in the Diagnostic and Statistical Manual of Mental Disorders (DSM) as one hallmark of psychopathology #301.22. But, in the hands of Corcoran and her team, it makes for magical theatre. 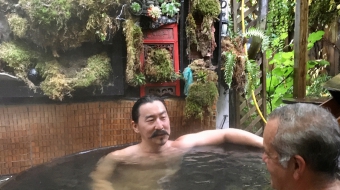 vACT's upcoming "Kuroko" breaks Shigematsu out of his shell
Lincoln KayeOct 21st, 2019
Speak up about this article on Facebook or Twitter. Do this by liking Vancouver Observer on Facebook or following us @Vanobserver on Twitter. We'd love to hear from you.