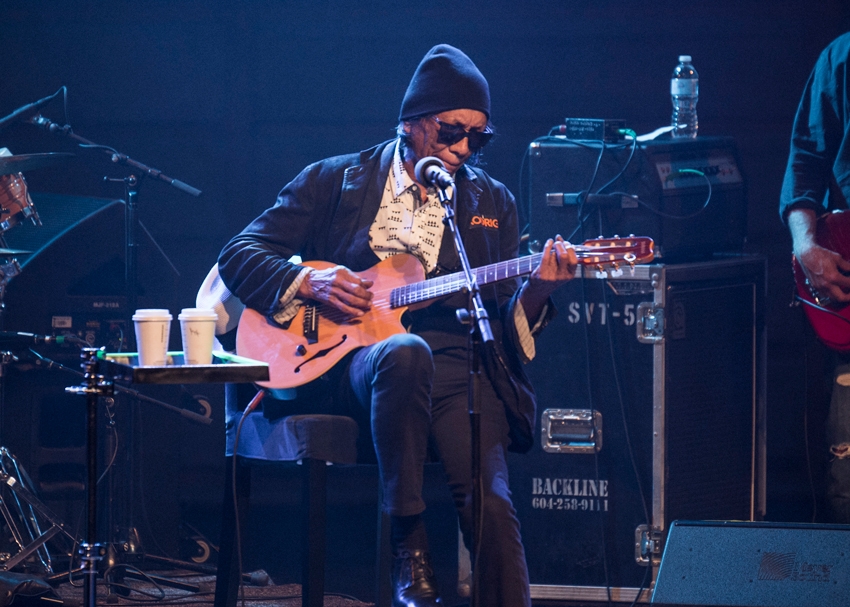 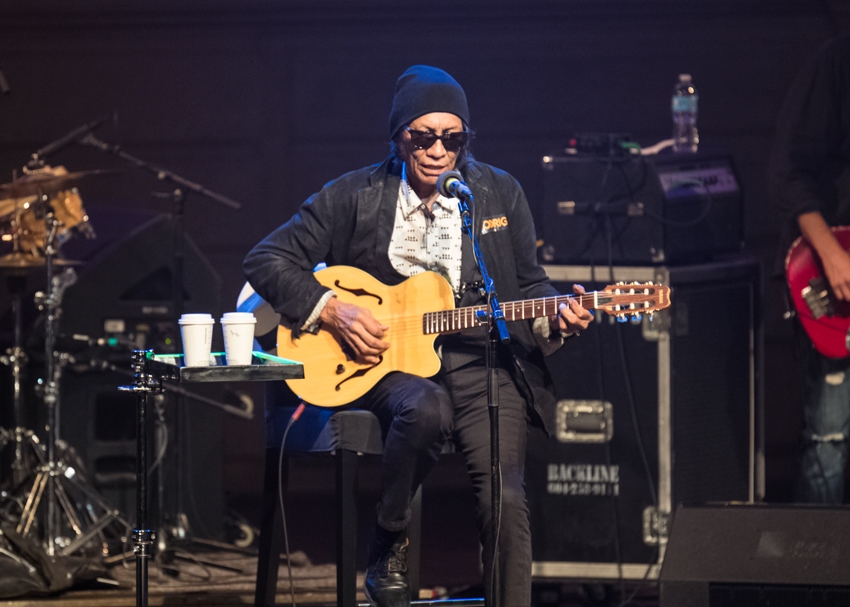 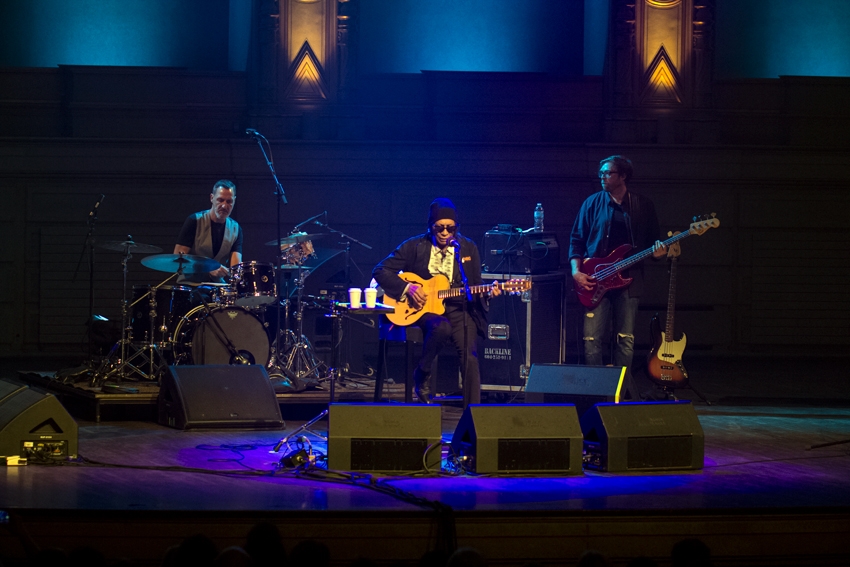 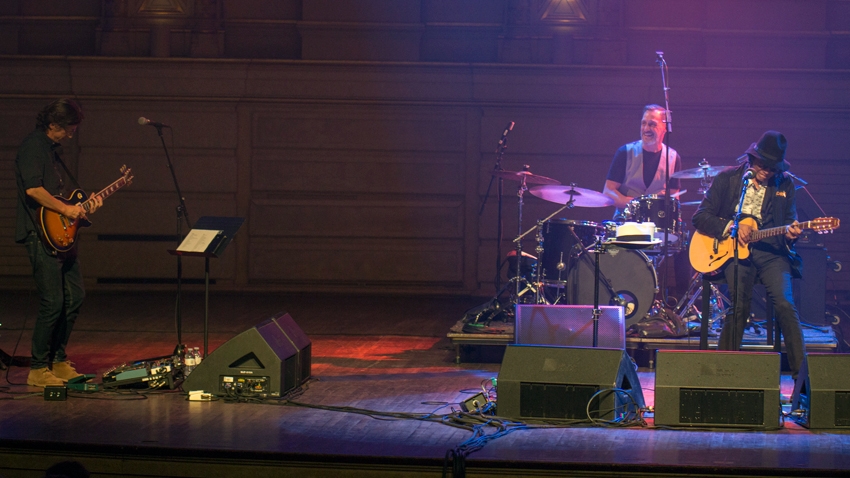 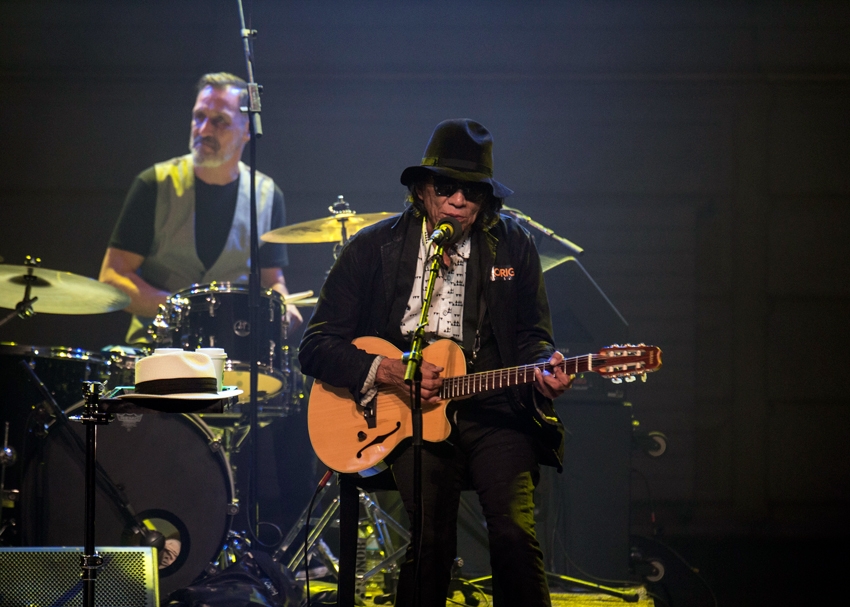 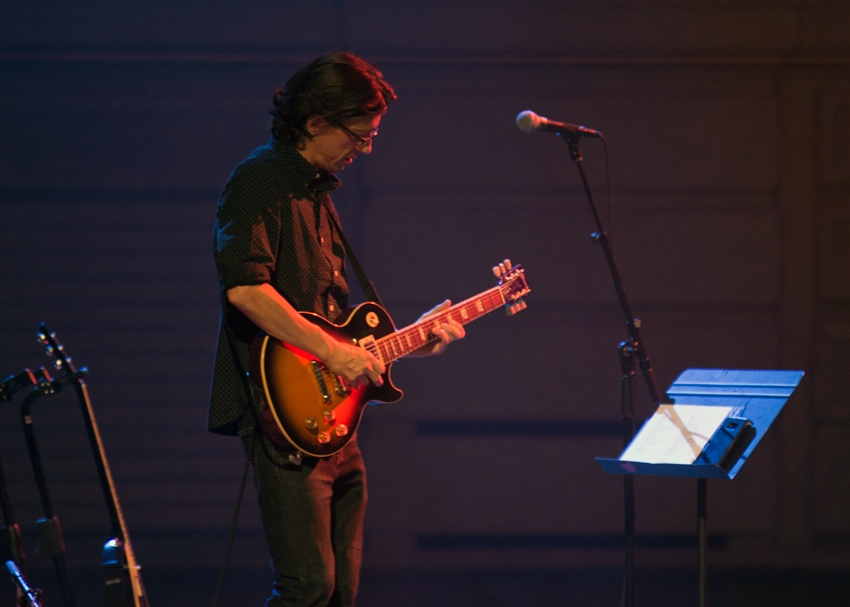 Dressed sharply in black, along with a white collared shirt, black hat, and black shades, Sixto Diaz Rodriguez exudes cool! He was led onto the stage by his two daughters, one of whom introduced himself and the band. Unfortunately, his age is catching up with him. Rodriguez, now 75, suffers from glaucoma which impairs his vision.

Besides from a stool where Rodriguez remained seated for his entire performance, the stage was dressed minimally besides from his three-piece band (his guitarist, drummer and bassist).

During his first three songs, Rodriguez could not seem to decide on which hat to wear. He switched between a black rimmed hat, a white rimmed hat and a black beanie. He later returned to his white hat and stuck with it for the rest of the evening.

It was at the start of his sixth song that Rodriguez became more comfortable on-stage. He removed his jacket revealing a sleeveless vest and his bare arms still rugged from years of hard labour.

His story is one of hardship, legend, and fame. Rodriguez spent most of his life working hard-labour jobs under the poorest of conditions earning little to no money.

He was a struggling musician in the late 60's living in Detroit. He recorded two albums, Cold Fact and Coming from Reality, both of which didn't do very well in North America. However, his music was revered and loved by many in South Africa. It was there that he sold more albums than Elvis, yet he didn't receive any royalties from his fame. In fact, many of his fans abroad believed him to be dead by apparent suicide none-the-less.

The story of his rags to riches return to fame was documented in the 2012 documentary called Searching for Sugar Man. This film won an Academy Award and projected him into a global phenomenon.

The man is humble, sincere, well-spoken, and adored by his fans. He introduced the song 'Rich Folks Hoax' by stating "We all come into the world with a clenched fist and we leave with an open hand." His quick lesson to his Canadian fans. Although, to him his greatest message is that there be peace on earth and power to the people.

His next song 'I Wonder' brought fans to their feet, dancing and singing together. As the song came to a close, fans shouted out you're a legend! Without a moments hesitation, he replied "I want everyone here, who is here tonight to know that I want to be treated like an ordinary legend." He got further applause from his fans.

I've had the honour of seeing countless musicians over the years and Rodriguez is one of the few artists who truly appreciates his fans and engages with them throughout his performance. A man not afraid to answer any questions and quick and witty with his answers.

'Forget It' his last song of the evening. poetically ended with the words "...thanks for your time, Then you can thank me for mine" Rodriguez thanked the Vancouver audience, and was given a standing ovation as he was led off-stage. However, moments later he returned for a three song encore.

He began with 'Establishment Blues', followed by a Doors cover to 'Light My Fire', and finally his very last song of the evening 'I'm Gonna Live Till I Die'. Moments into his first encore song a few fans got up and danced in-front of the stage. Security disbanded the fans moments later. However, this did not deter the rest of the crowd as a few hundred fans flocked to the front of the stage in protest and danced together in harmony. By this time the entire audience was on their feet and there was nothing that security could do restrain the his fans. The energy in the room was exhilirating and I couldn't help but think back to his words earlier in the night.

Power to the People.