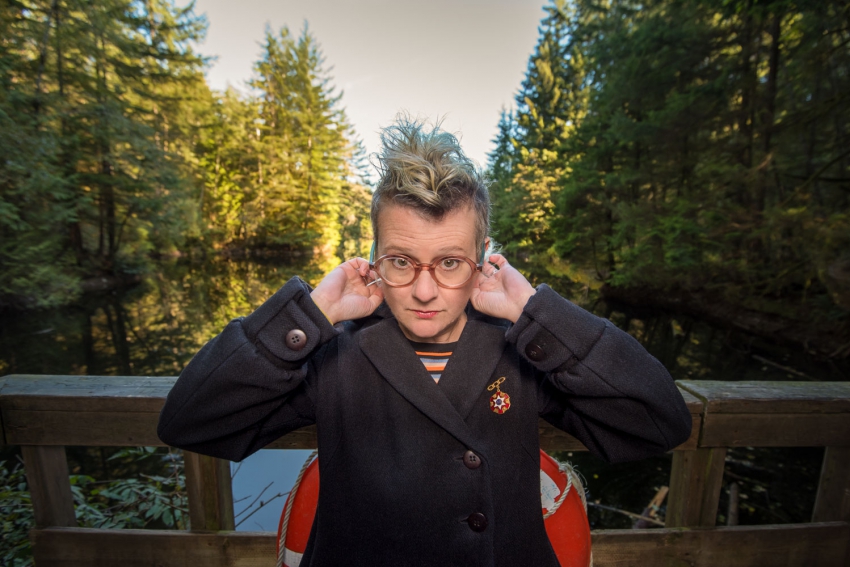 A Force of Nature, tuning into the trees. Photo: Stephen Drover

Singer/songwriter/bandleader Veda Hille, Vancouver’s troubadour laureate, well knows how to please a crowd. Over the years she’s regaled local audiences with original compositions ranging from indie albums to cabarets to a full-scale opera (Onegin), not to mention her annual East Van Panto farrago.

But in her new solo performance, Little Volcano, we sense she’s playing not so much for us as for herself. Produced by Theatre Replacement, the show it brought to the Orpheum Annex by Music on Main as the opening salvo of this year's PuSh Fest.

The intimate, black-box venue is apt for such an intensely personal tour de force. Nothing flashy about Little Volcano; rather, Hille captivates us with the quirky, indrawn, free-associative way she strings together her songs on a meandering thread of autobiographic reminiscence.

At 52, having just pulled through multiple surgeries plus chemo- and radiation therapies in a bout with cancer, she’s amply earned the right to reminisce. Nor does she leave her audience behind in the process; she earned lots of applause, laughs, a few tears and finally a prolonged standing ovation from the packed house of Vedaphiles.

But you’ve got to be ready to roll with her idiosyncracies. It’s not every crooner who’d dare to work words like “proprioception” or “eclampsia” into a torch song.

The staging is simplicity itself: just a grand piano and an old-style LP turntable. Hille wears a sombre, flowing ensemble (by costume designer Leah Weinstein) of skirts, shawls and aprons, like some Earth Mother figure out of a Gunther Grasse novel. She peels off layers in the course of the evening as she heats up from her exertions at the keyboard.

She plays against the backdrop of a replica of 19th century scientific illustrator Orra White Hitchcock’s “Sectional View of the Crust of the Earth.” It's a giant curtain -- ≈ 30' x 30'.-- centred on a fiery orb of magma encircled by a thin brown ring that’s pierced with a dozen or so Little Volcanoes.

Scripted though they may be (by Hille herself in collaboration with Theatre Replacement co-founders Maiko Yamamoto and James Long), the monologues are delivered with a seemingly spontaneous, heartfelt fluency. The narrative is seamlessly intercut with some 14 original Hille songs, spanning over two decades, including two new ones written expressly for Little Volcano and set against the gentle shimmer of Bach Preludes.

Along with her own music, Hille favours us with dazzling renditions of Bach – some six Preludes plus a Fugue and a Three-Part Invention. This classical repertoire is a side of Hille rarely seen by even her most fervent local fans, but very much bound up in her formative years as a “nerdy, hippy,” introverted and intermittently sickly child in Langley and Vancouver.

Growing up, she says, she came to appreciate Bach’s opus not so much as the output of an historic human being, but rather as a product of Nature itself, “like something you might see under a microscope.” And, as “a West Coast kid,” she embraces Nature as the touchstone for her own creative work, she says.

Back in the 1990’s, on her touring debut in Hamburg, she was hailed for her fiery performing style as “ein kleiner Vulcan” – a Little Volcano. She’s still trying to live up to that description as a Force of Nature. But no longer with flashy pyrotechnics. Rather, she now aims to preside over the landscape of her life “implacably,” in snow-clad, smouldering majesty.