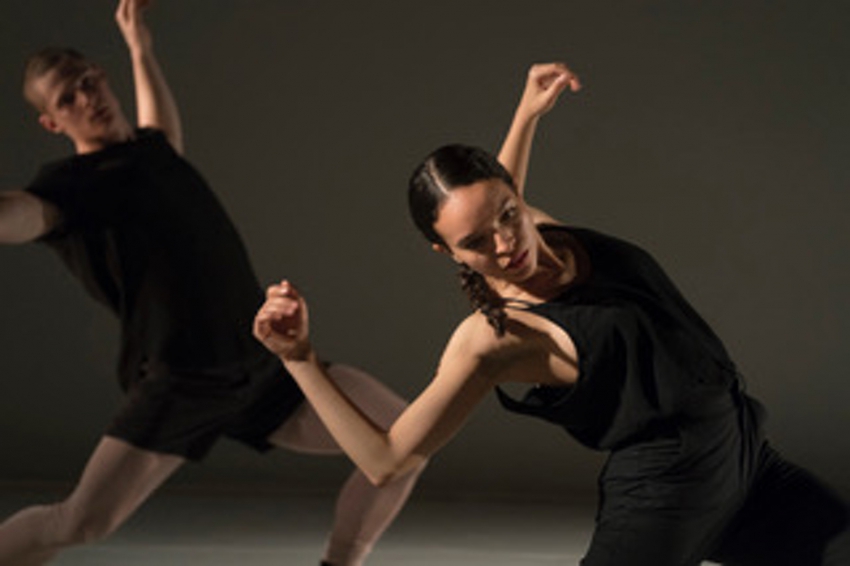 No, not that kind of spooky – the trick-or-treater’s Thrift Shop chic, the pasteboard things that go “Boo!” in the Fun House.

Inverso’s multi-disciplinary Spooky Action, which world premiered last night for an all-too-fleeting three-day run at the Firehall, is steeped in the mysteries of quantum entanglement, an enigma of cutting-edge physics so counter-intuitive that it flummoxed even Albert Einstein.

Neither of the creative drivers of the project – choreographer Lesley Telford nor recitative script-writing bard Barbara Adler – claim to really grasp the mathematical underpinnings of the paradox: that nanoparticles sharing a common subatomic origin will instantaneously mirror each other’s energic state no matter how far they’re spatially separated.

To a gob-smacked Einstein, this amounted to Spukhafte Fernwirkung – “spooky action at a distance.” But both Telford and Adler are convinced that karmically linked humans experience such instantaneous energy transfers just as inexorably as the minutest quantum monads.

This intuition they translate into vocabularies of movement and words, respectively, that are hardly “spooky” in the kitsch Halloween sense, but distinctly uncanny in their offhand mixture of coolly objective “scientific” automatism and passionately emotive expression.

So, when they’re not all coordinated in unison formations, Telford divides her five vastly talented performers – Stéphanie Cyr, Eden Solomon, Brandon Alley, Lucas Wilson-Bilbro and Anya Saugstad – into varying subsets. She then foregrounds an emotive solo or duet against a frenetically “mechanical” background movement (or sometimes vice versa).

Likewise, Adler’s recitative. It casually swoops from dry algebraisms to poetic fancy. She hardly misses a beat in lines like “There's A/ and there's B.// You, A,/are on your own path.//It measures out behind you/ like a line of ants/ on a hard march to something sweet.”

But, then, in overlapping roundelay voice-overs, Adler intones “Your face.../like mine…/ like now…/is blowing open into a smile/ without you here and without us …/wanting to.”

This sense of interconnectedness is a realization that dawns only gradually – about as much of a “story line” as Spooky Action offers. We start out with a solo dancer (Alley) enacting the autarkic infant mind, convinced (as per Adler’s voiceover) that he “made the world happen,” simply by opening or shutting eyelids to invoke or dismiss any experience, from weather to his attendant audience of people.

But then the sense of warm, rosy sunlight on his face and closed eyelids reveals that, in fact, “the world was happening to me.” What’s more “people happened to me…and when I happened back…they happened more…so I happened harder.” From which flow the lessons of cause-and-effect, sequential time and the Theory of Mind that posits the autonomous existence of intelligible Others.

Anybody that’s ever babysat a toddler (I’ve just finished a month of it) well knows this miraculous evolution.

But here’s where Telford’s Fernwirkung starts to get Spukhafte: when cause-and-effect collapse into a breathless simultaneity and the onstage Others grow a bit less autonomous and a lot less intelligible.

Dancers clump together into push-me-pull-you composite creatures that scuttle about with startling grace. The two female leads, Cyr and Solomon (“stars” in that they’ve been with the Spooky Action throughout its three-year gestation), slither together into a black Spandex sheath for a sinuous series of joint undulations where there’s no telling whose limbs are which.

And all the while, backgrounding these more-or-less anthropomorphic, emotive cadavre exquis contortions, the remaining dancers twitch and writhe with the manic impersonality of microbes or muons.

Designer Alan Brodie reinforces this affective/objective duality. He starkly silhouettes or side-lights the dancers with explicit lighting arrays, as regular as Cartesian grids, on all 12 edges of the stage space cube. But then he subtly limns individual figures with frontal or overhead spots.

Composer James Meger’s score, with its contrapuntal juxtaposition of percussive drive against languid lyricism, similarly queries the contrast between “feeling” versus “unfeeling” entanglements. Trained as a bassist, the multi-talented Meger personally executed all the tracks, performing on a suite of instruments ranging from drums to strings to horns to keyboards.

Hard to tell for sure, though, just what he’s playing. He’s carefully sampled, remixed and synthesized everything beyond any forthright recognition, thereby reinforcing the ambiguous “spookiness” of Telford’s action. Meger, too, has been on the case for the whole three-year development process, through all the revisions, so that by now his score fits the entire 60-minute piece like a snug glove.

Still, there’s room for serendipity in the production. About two thirds into the show, Alley slinks in, stage right, tugging a white band behind him. It’s elastic, like a tourniquet; it resists, yanking him backwards, but he forges ahead in stages until it bisects the whole stage at waist level.

Other dancers rush it, pluck and stretch it (to Meger’s twangy musical accompaniment), then retreat to the wings. That leaves only Cyr and Solomon to clutch opposite ends of the line, flicking and reeling each other like fly fishermen casting a lure.

Adler’s voiceover recites “There's a thread between the travelling points A and B…/ [it] stretches like a string connecting/ an open door to a loose tooth./ I move/ you move./ The line pulls tight:/ the mouth is wet with blood./ The tip of the tongue finds the root of the tooth.”

…whereupon, on opening night, the elastic abruptly snapped right in the middle. The two dancers – consummate pro’s – immediately recouped their balance, leaning in against the tension from the wings rather than outward against each other’s pull.

Brilliant! Surely it was planned?

“I wish,” Telford related in the post-premiere cast party. “But how can you replicate a thing like that right down to the split second?”

Somewhere in the entangled quantum universe, though, that snap must have been instantaneously mirrored.