Besties and beasties in love 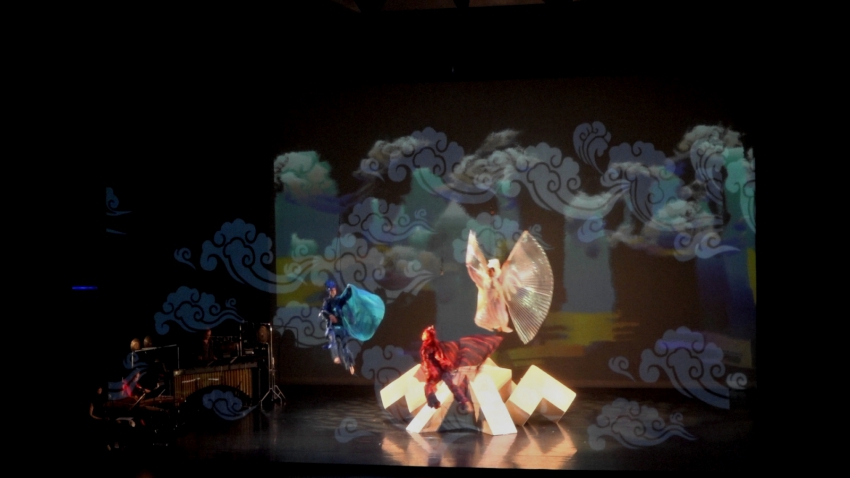 Not easy to look away from the onstage action of Crossing Mountains and Seas at the Vancouver Playhouse last night – the soaring aeroballet and edgy modern dance of the three Aerosa co-stars, the permutational magic of Sammy Chien's ever-shifting light projections, the flair or Chandra Krown’s costumes or Li Tung’s line drawings of chimerical mythic beasts.

But it was worth it to divert the eye now and then down to the orchestra pit. There, as an incidental by-product of their two-hour geyser of sonic invention, the three fusion musicians of Orchid Ensemble presented a dazzling visual spectacle of their own.

At the still center of the trio, the Ensemble’s founder and artistic director Lan Tung (who was also the producer of the show) presided with a commanding composure. She plays a Chinese erh hu – a tiny, elongated banjo-looking instrument that’s balanced upside-down on her knee with a bow intertwined between its two strings.

In her hands, the erh hu uncannily mimiced the thought-music of your ghostliest dreams. It could be hard to tell when she'd sometimes puts by her instrument to sing. She boasts an astonishing range, from a throaty alto to an ethereal coloratura, elaborating her often solfeggio vocal line with understated hand gestures.

Nothing understated, though, about the body language of the two fellow musicians that flanked her. Dailin Hsieh wailed upon her zheng (Chinese zither) with panache. She tickled a propulsive mirth out of her bass strings and finished off her upper register arpeggios with a flourish.

And percussionist Jonathan Bernard sprawled across half the orchestra pit behind an array of chimes, gongs, cymbals, temple bells , wood blocks, a double-register marimba, congas, a taiko tub and a cartwheel-sized “white noise generator” called a tam-tam – each instrument commanding its own special kind of kinesthetic zest.

The musicians played virtually non-stop for the entire performance, pausing only for brief recorded interludes. Those intentionally bland techno riffs to accompanied the text boxes that spelled out the framing story of Mountains and Seas.

It’s a budding romance between two online gaming buddies. They’ve never knowingly laid eyes on each other, but only communicate in slangy, flirty SMS chats alongside the margins of their shared cyberspace adventures.

We first meet them, played by Aerosa dancers Thoenn Glover and Alex Tam, in their “civvies” (T-shirts and jeans), each crouched over a cellphone in a lonely bedsit. They text-grouse to each other about the sexism and racism they encounter in their humdrum IRL (“in real life”) day-jobs. No wonder they seek refuge in a realer reality of a virtual kind.

All the more so when they stumble upon the phantasmagoric glories of a brand new video game. It's based on the 3,000 year-old Chinese Classic of Mountains and Seas, a kind of dream-atlas-cum-bestiary-cum-ethnography of prehistoric Asia.

Our two protagonists are the first to beta-test Mountains and Seas, amassing SP (“spirit power”) Points to ascend the new game‘s hierarchical Levels.Their challenge: to  aid mythic Chinese heroes (danced by Aerosa’s Cara Siu) in terraforming the turbulence of the nascent earth into some semblance of human habitability.

Of course we in the Playhouse audience could see that the real source of their SP is the musical energy of the Ensemble in the pit, and that the dancers’ headlong flights through cyberspace all depend upon rigger Colin Zacharias’ elaborate set-up of clips and cables. But amidst the swoop and swirl of the video projections, it’s easy enough for us to forget all the apparatus and accept the virtual world on its own terms.

As for the onstage besties, they become so immersed in the game that it’s a wrench to tear themselves back down to the mundanity of a real world laundromat long enough to shift washloads into dryers.

To heighten the contrast, the show turns to two different choreographers for the gaming versus the IRL scenes. Aerosa founder Julia Taffe coordinated the whirling “vertical ballet” gaming sequences, while China-born Wei Chengxin worked out the angsty, earthbound IRL interludes.

Designer Khan Lee’s sets adapted ingeniously to either mode – a scattering of huge Tetris blocks that the dancers could wrangle into place to become, variously, the prosaic “white goods” of a laundromat, the undersea sluices of a world-drowning flood or the craggy pinnacles of the Kunlun Mountains, inter alia.

In the end, we could share the protagonists’ reluctance to shift back to the prosaic plane of daily life. But it’s mitigated a bit by their trite, but sweet, realization that they’ve seen – and fantasized – about each other all along IRL as well as online, through the medium of the laundromat.

Leaving the dream world of the video game, they agree to a fleshly, cos-play tryst in the most romantic venue they can think of: how about onstage at the Playhouse? They’re joined by fellow-dancer Cara Siu, as well as all four Mountains and Seas co-creators – Lan Tung, Chien, Wei and Taffe – to receive Vancouver’s customary standing ovation.