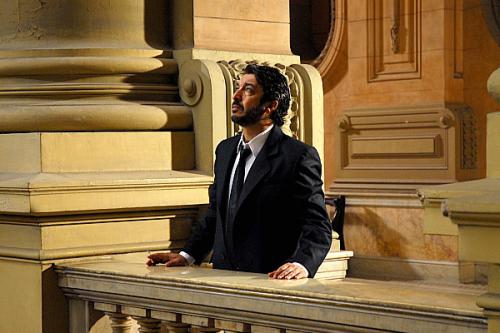 Argentina's Ricardo Darin stars in The Secrets in Their Eyes

Environmental films are prominent this week, but so is Argentina's surprise Academy Award winner, Jennifer Lopez watching the baby clock and two Chinese tales, neither taking place in China. And then there's a locally produced computer tale.

NOTE: I’m travelling this week and next. You’ll find some of the information below is incomplete.

THE SECRET IN THEIR EYES: Now at last we can see why this film from Argentina won the Academy Award for best foreign language film. The story is compelling, the acting is superb and the presentation is first-rate.

Like The Girl With the Dragon Tattoo, this is a cold case mystery. A retired criminal court official (Ricardo Darín) is stalled trying to write a novel based on a rape and murder investigation from 25 years ago. To refresh his memory, he visits his old colleagues at the office and we get two histories skillfully told: his own and the case. In flashbacks we learn the real story about a bungled conviction, a political twist and a chilling surprise aftermath. At the same time we get a subtle parallel story. Years ago, Darin’s character was romantically drawn to his boss (Soledad Villamil) almost as soon as she joined the staff. He never acted on it but even now that she’s a judge and further out of his league the feeling is still there. In the flashbacks there’s a persistent undercurrent between them of sexual tension which later on powers a startling interrogation scene. That’s typical of how the story elements fit together and develop logically. Watch for a real highlight sequence at a soccer stadium that starts amidst the passionate fans and turns into a long chase up and down the stairs and ramps. Director Juan José Campanella sharpened his craft in American television.
(5th Avenue) 4 out of 5

OCEANS: At the very end of this film, we finally get an important message. We depend on the oceans for our very survival, including “every drop we drink.”  Shortly before that, there were brief mentions and images of overfishing, pollution and climate change. The fact that all that comes so late and in so truncated a form highlights the main shortcoming of this beautiful new film: there’s no theme that ties it’s many parts together. No unifying story. It’s like taking a quick tour of the underwater world and watching a collection of gorgeous scenes for no greater purpose than enjoying the pictures. But what pictures they are.

The same directors (Jacques Perrin and Jacques Cluzaud) made the spectacular Winged Migration  a few years ago. Again they show us plenty we haven’t seen before: jupiter crabs massed for battle like Orcs, dolphins chasing sardines,  a great white shark jumping to gobble up a seal. The scenes keep coming and as in a wonderful nighttime sequence succeed at conveying a sense of awe and wonder. They were shot in and under waters all over the planet, including Nunavut here in Canada. Pierce Brosnan reads a rather pedestrian narration to accompany but rarely explain (“ … gazing toward the heavens with prehistoric eyes”). This is the second Disney film timed to Earth Day, following last year’s Earth. That one had a story as well as the pictures.
(5th Avenue, Tinseltown and other theatres)  3 ½ out of 5.

PROJECTING CHANGE: After last night’s opener, this festival has three more days of provocative environmental films. Among the highlights: H2OIL a real eye-opener about the Alberta tar sands oil project. Natives in the Lake Athabasca region are finding high arsenic levels in their moose meat, fish with cysts and rising cancer rates in their people. A local doctor raises an alarm but is slapped down. The premier warns against “silk-suited environmentalists”. It’s a scary picture. FRESH is more hopeful as farmers, theorists and entrepreneurs talk about re-inventing our food system to be healthier and sustainable. The biggest highlight might be the last. PIRATE FOR THE SEA is a biography of Paul Watson, who helped found Greenpeace but was ejected as too radical. He’s been harassing Japanese whalers recently with his Sea Shepherd Conservation Society. Watson will be there and comparing ideas with David Suzuki on this kind of environmental activism.
(5th Avenue Cinemas) Details at  www.projectingchange.ca

THE BACK-UP PLAN: There’s a TV sitcom sensibility in this new film that brings Jennifer Lopez back from her maternity break. No wonder, both the writer and the director worked for the small screen and the movie was produced by CBS.