The inside scoop on Walking With Dinosaurs 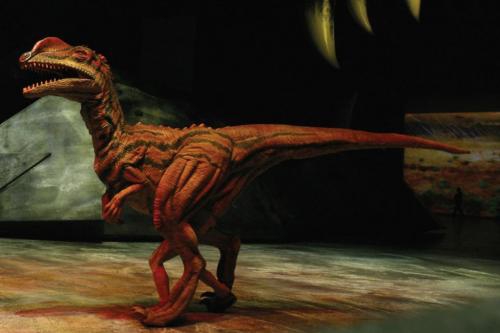 Today we talk with Kari Klein, voodoo puppeteer for Walking with Dinosaurs – the Arena Spectacular.

WD: Could you tell us what a voodoo puppeteer is?

KK: We're the ones who basically give the performance to the dinosaurs. It takes three people, over all, to perform each of the large dinosaurs. One person is the dinosaur driver and they're seated in the chassis underneath the dinosaur, kind of like a sled, and they control the physical placement and the speed of the dinosaur on stage. For the puppeteers, it takes six puppeteers per dinosaur.

We're not touching the dinosaur, we're not inside the dinosaur, we're not even anywhere near it. One of things about performing this kind of show that's really cool is, as a puppeteer we're normally underneath the set or inside something or back stage, we're never seen. But in this case we're actually on a platform right in the audience performing the dinosaurs by remote control. We can hear and see people's reactions. And it's also really special because people can come up to us and ask questions and talk to us.

There's one person who is the lead voodoo. They control all of the large movements of the dinosaur: the head, the body, the neck, and the tail. They use something called a voodoo rig, which is how we got our name.

The other puppeteer is an auxiliary puppeteer and they control the smaller movements like the eyes and the mouth but then they also perform sounds. All the sounds are pre-recorded on a keyboard and they play them back like a piece of music.

WD: Can you tell us a little more about the history of this show?

KK: It's based on a show that was originally on the BBC and then moved to the Discovery channel, called Walking with Dinosaurs. That was wildly successful and they wanted to see if they could take it a step further.

They did a six week tour in Australia before they got to North America where they did a run through most of the United States and some major cities in Canada and in Mexico.

That had proved so wildly and incredibly popular that they made a second tour. They made a complete second set of dinosaurs: full set, full cast and everything. A couple months ago they wrapped a year of shows in Europe and that tour had moved over to Asia. They just got done performing throughout Japan and they're now getting ready to move to Singapore and Hong Kong.

This tour, the North American tour, we conclude in about two and a half weeks. Vancouver is one of the last cities that will get to see the show. After we leave we head to Anaheim and LA, and then that's a wrap. Then the North American part of it heads back to Australia where it was born.

WD: How has it been received in Canada?

KK: Very, very well actually. It's been well received all over the place. To give you an idea of how well received, we performed over a thousand shows and are rated by PollStar as one of the top five touring shows in the world. We're up there with the likes of U2, ACDC, Bruce Springsteen, and Coldplay.  So we're in very good company.

It's been well received everywhere. Everyone who has seen it has been completely blown away. That's one of the amazing things about this show.
Some people think it's a kids show but I guess you could say it's a family show because it appeals to more than just kids.

I think everybody can find something fascinating about dinosaurs but then there's this whole other level with this amazing technology that was created just because of this show. To have seventeen full size, one to one scale dinosaurs is just mind boggling.