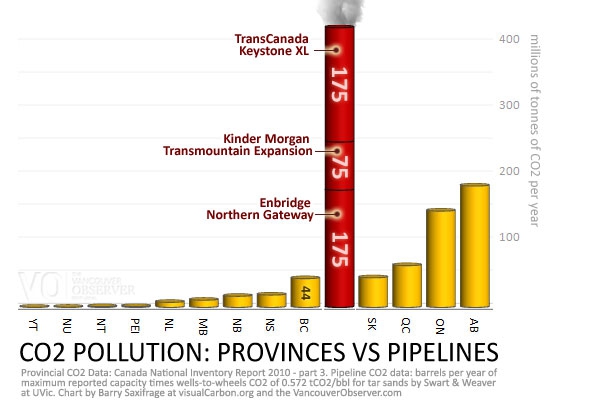 Each proposed tar sands pipeline, like Enbridge's Northern Gateway, requires a massive new climate pollution spill to go with it. The size of any one of these new CO2 spills far exceeds all of BC's current emissions.  These pipelines literally can't function without these CO2 spills starting and continuing for decades. They are part of the deal. And those deals are starting to lock Canadians into a lose-lose future.

Corporations like Enbridge, Kinder Morgan and TransCanada know that they are proposing projects that demand massive CO2 spills -- that can't be stopped -- for them to make their money back and to profit from it. The scale of the CO2 pollution required for these projects dwarfs anything else in Canada's economy. Yet despite locking us in to huge risks, neither our governments nor the corporations are even talking about it.

For example, the required CO2 spill for either Northern Gateway or Keystone XL pipelines runs up to 175 million tonnes of CO2 (MtCO2) per pipeline per year. Either pipeline would require a new on-going spill larger than the combined emissions from:

Kinder Morgan's proposed new Transmountain tar sands pipeline to Vancouver's harbour will require a continuous multi-decade commitment to spill up to 75 MtCO2 per year. That is more than either the provinces of BC or Quebec (63 MtCO2) emit. Both provinces have pledged to cut emissions dramatically. But this one pipeline would wipe out any possible CO2 savings the people of BC or Quebec could ever make in their efforts to prevent dangerous climate change.

Agreeing to build these pipelines will paint Canadians into a lose-lose corner -- both morally and economically -- as the climate crisis grows more extreme. Once built we are left with a choice to either continue these gigantic CO2 spills unabated for decades or to strand billions of dollars in capital assets.

Each pipeline is effectively inflating a multi-billion dollar carbon bubble directly in the path of Canadians ability to slow or halt global warming. It places the economic interests of powerful multi-national corporations in direct conflict with Canadians desires to build a climate-sustainable economy. Do we really need even more obstacles in our way to preserving a safe climate for our kids?

The International Energy Agency (IEA), one of the world's most authoritative sources on energy markets, recently calculated that humanity already has so much existing fossil fuel infrastructure that we are very close to being "locked in" into dangerous climate changes beyond 2 C of warming. Continuing to pile on more fossil fuel infrastructure, like these "must-spill-massive- CO2-for-decades" pipelines, is forcing Canadians and humanity to have to make bitter lose-lose decisions. Either:

A ) Suffer the ravages of a dangerous climate.
As the IEA put it: "The world is perfectly on track for a six-degree Celsius increase in temperature. Everybody, even the schoolchildren, knows this is a catastrophe for all of us,"

B ) Strand capital assets and destroy value.
As Mark Jaccard, a professor at Simon Fraser University and lead author for sustainable energy policy in the coming Global Energy Assessment wrote: "we would have to blow up our factories, electricity plants and vehicles" to avoid dangerous climate impacts.

Up the down staircase

It is not just energy experts and climate scientists that are worried.